I create these folders on my phone, constantly filling them with haphazard pictures of restaurants and filtered into the cities in which to find them; Potluck Glasgow have long been on the list of places to try.

Potluck have grown somewhat of a cult following thanks to their picture perfect hot cakes and after seeing countless pictures online, I was determined to try them on our latest trip to Glasgow.

I’m still unsure whether these folders could be considered extreme forward planning on my part, or just sheer laziness as I’m horribly indecisive. A trait that doesn’t garner much admiration, especially when hungry.. as Peter usually is..

Nothing causes more bickering between us than deciding what or where to eat. Nevertheless, these folders are possibly the best idea I have had as when we travel, I just pop up the relevant folder with the already vetted options. No more standing around frantically googling options. 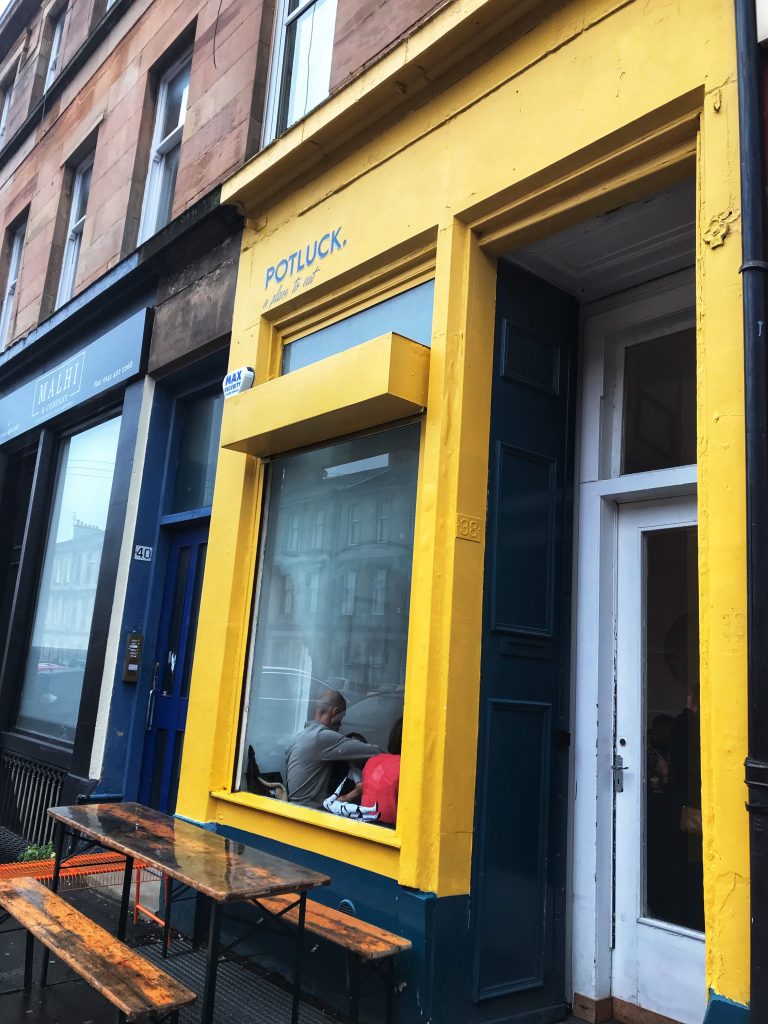 Potluck is just South of the city centre in up and coming Strathbungo. We had never visited this part of Glasgow before but the area of Strathbungo was recently named one of the best areas to live in Scotland, so it’s no surprise that there are some great finds here.

Peter and I arrived at Potluck shortly after 11am on Sunday after the long drive from Aberdeen, so it was definitely time for brunch. As we didn’t know much about the area or indeed much about Potluck, we just parked up and made our way in. We were incredibly lucky for a weekend as we were seated straight away, we had a pick of tables and there was no fuss. However, upon leaving I searched TripAdvisor to gauge other peoples opinions and I gather that our experience was not the norm.

There are only 6/7 tables in Potluck and all but one seat only two people. And all in very close proximity so there was a lot of shuffling the table back and forth to get in and get comfortable.

Shortly after we were seated, the other available tables filled and a small queue formed. Considering the time that we got there, I think it was just luck to be seated so quickly but from reading the reviews on TripAdvisor, it sounds as though queues are to be expected and often involve standing outside of the door in less than favourable weather.

As I said, when seated, you do find yourself in close proximity with the other diners due to the size of the premises and along with the high ceilings, noise travels. I did find it quite loud at points but certainly not overbearing.

Potluck offer table service and we found out that our server was quite new; one of the recurring themes I saw in the reviews were about some unfriendly staff but I have nothing bad to say on this matter. She was very polite, very friendly and very helpful so don’t always let reviews like those put you off visiting. 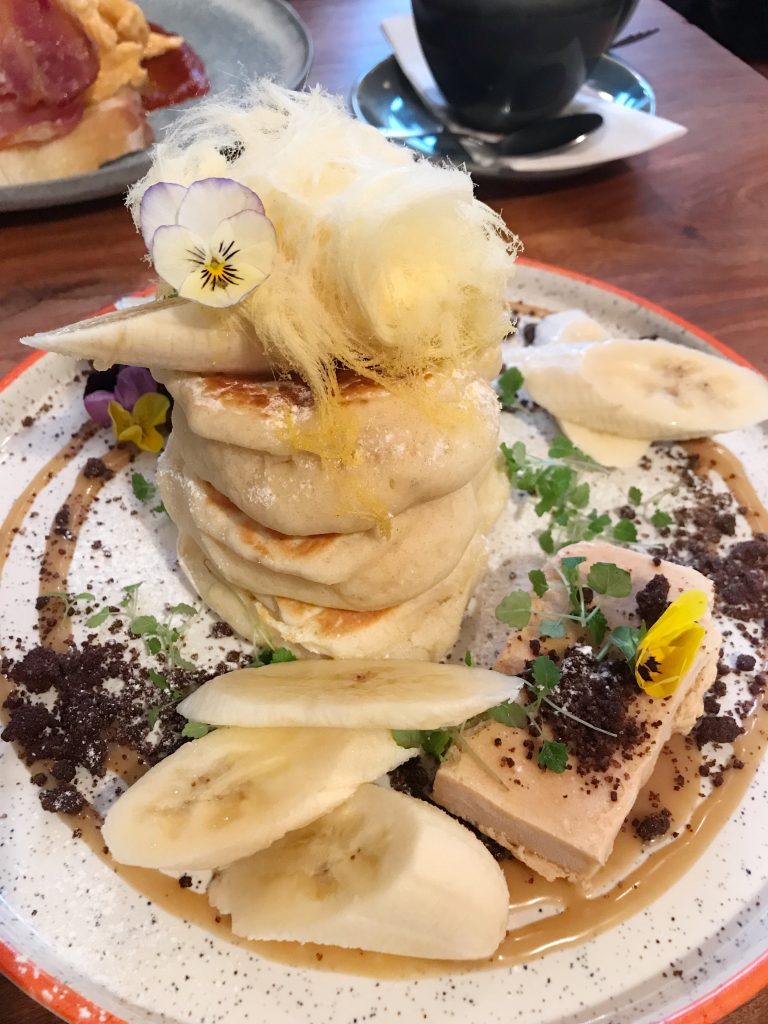 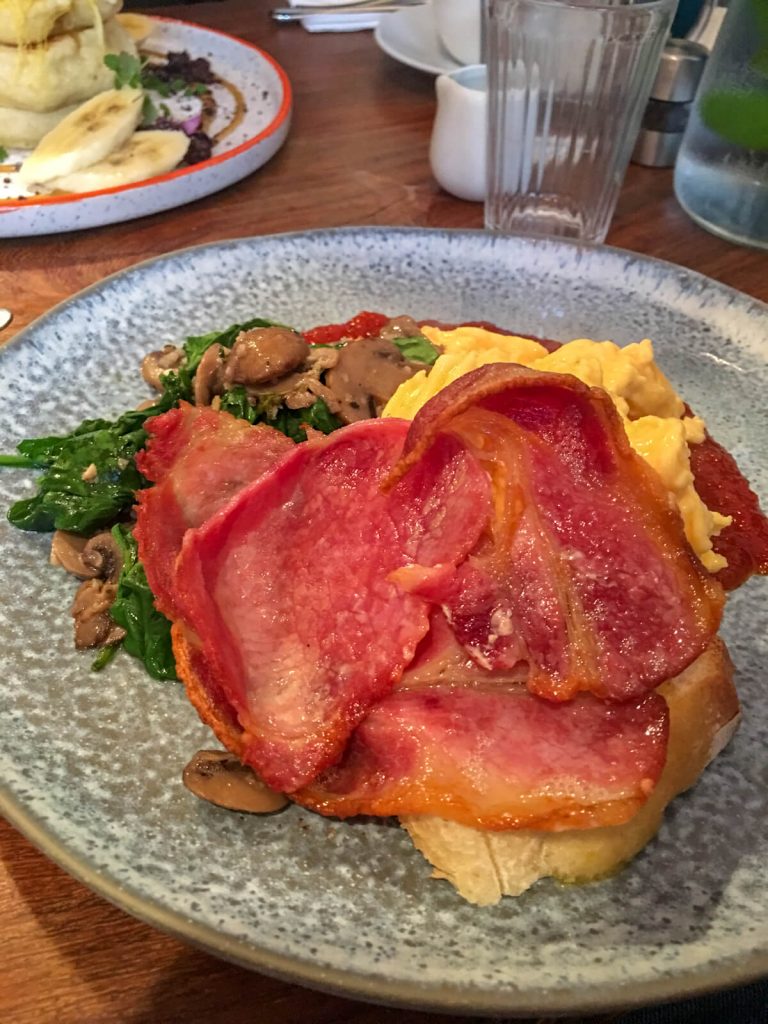 Let’s get to the good bit! Is Potluck Glasgow worth the hype?

First things first, the tea tasted bad. Really bad and I think everyone knows how important tea is to the British. So that disappointed me. I’m not sure whether it’s down to the quality of water, or how the tea is stored but it just wasn’t good.

The coffee on the other hand, was good. No wow factor but good nonetheless.

But we weren’t there for the drinks and although I think they are an important part of the experience it wasn’t a dealbreaker.

The banana hot cakes looked just as pretty in person as I had seen in the pictures so I was thrilled. They may even have looked better (potentially because I knew I was getting to eat them). When you see all of the elements together on the plate, I think you realise that actually, it is a lot of food and it was presented very well. I think it was really worth the cost of £8.50.

Everything on my plate tasted really lovely, the hot cakes were just as fluffy as I had hoped and the peanut butter parfait was a great accompaniment. I really love peanut butter but Peter found the taste overpowering of the other flavours so that’s maybe something to consider if you are looking to order this dish.

Peter had the breakfast stack and usually I find the less he says, the more he’s enjoying it. But this time he actually made a point of telling me that he was enjoying it and that I had done a good job in finding Potluck. So really, I think that’s pretty telling. Oh, but the chilli was hot. He said that, but he did swoop all the remainders onto his toast and didn’t leave a drop of it behind so I think the heat may have been somewhat subjective. 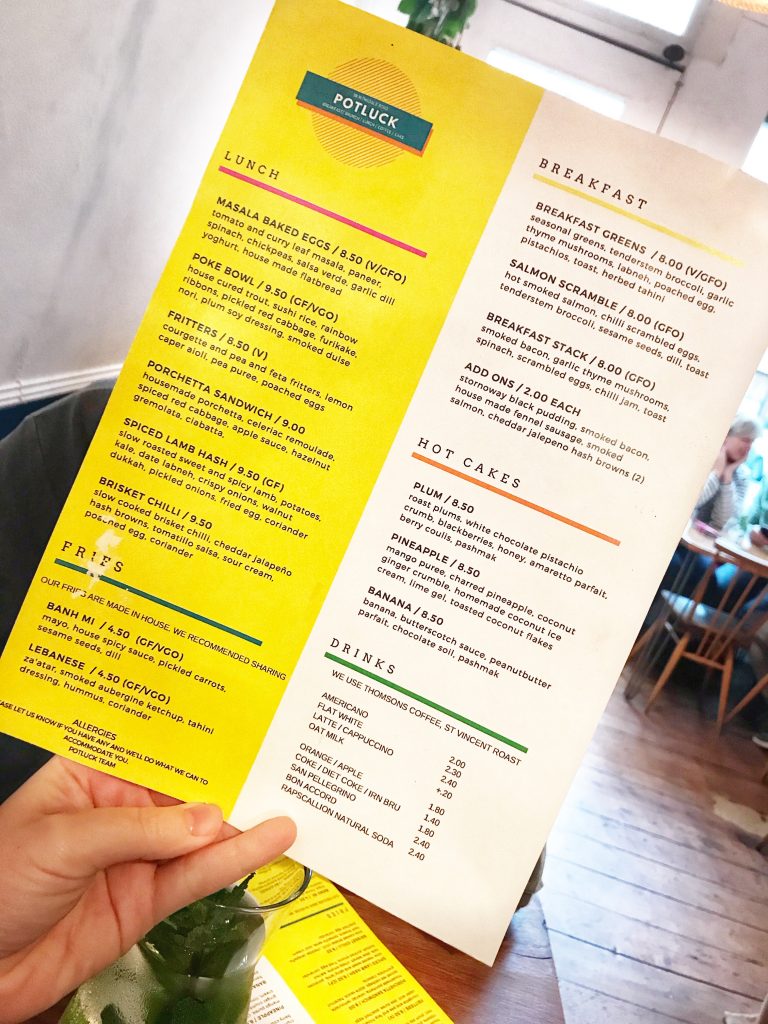 I was hell-bent on trying the hot cakes on our first visit but after having a look at the Potluck menu I will definitely be returning for some of their fries – both the banh mi and Lebanese fries sound brilliant!

Now I see how Potluck gained this reputation and I think that they are a very strong contender for the best brunch in Glasgow!