As always, we love to plan a couple of day trips while on longer holidays and we do this as a way to experience more of the location we’re visiting but also to break up the days so that they don’t become too routine.

I am not a sit by the pool kinda girl although it’s safe to say that I’m equally not all action. I like to enjoy the time to relax but I also like to do it with a different view every now and then so if you are anything like me and you are looking to visit or book a holiday to the area of Dubrovnik in Croatia, I would highly recommend a day trip to nearby Lokrum Island.

Visiting Lokrum was not high up on our list of things to see while in Croatia but we did not find that there was too much to do beyond Dubrovnik’s old town walls to occupy a full weeks holiday and soon wanted to explore a little further afield from our resort of Mlini.

In all honesty, we had imagined Lokrum to be a nice, picturesque island not too far from the old town Dubrovnik that may have some nice swimming spots and not much else but we sorely mistaken and it turned out to be one of my favourite days of the holiday.

Travelling to Lokrum Island was incredibly easy. There are many ferries that run along the old city port which can take you for the small cost of approximately 40 Kuna which is around £5. The ferries run around every half-hour and the journey only takes 15 or so minutes to reach the island. 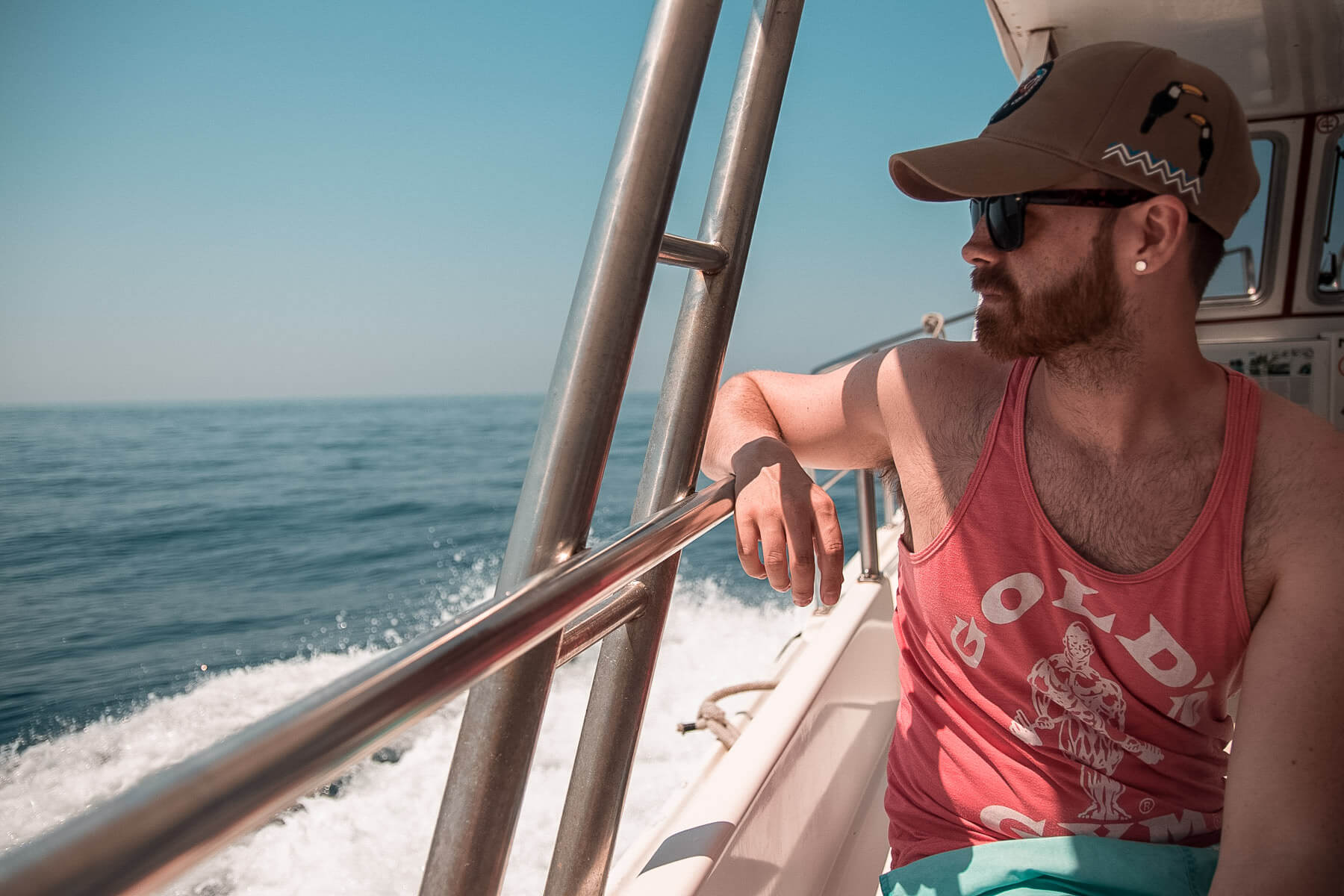 We didn’t do much research before boarding the Lokrum ferry and I think that added to the surprise for us when we arrived as we really hadn’t expected much from it. The only thing that we had agreed on prior to visiting was to take some swimming things as we knew there would be nice areas for sunbathing and swimming but also to take plenty of water as the Croatian heat is something else in the height of summer and we were not sure whether there would be any shops.

On arrival, we decided to spend a little time exploring and walked on one of the many paths available. Lokrum Island is a nature reserve and there are plenty of trees, greenery and vegetation to see along with the beautiful scenery of the water. However, this also comes with some challenging terrain which we were definitely not prepared for. Let it be said that sandals are not the best-suited footwear for this island if you plan on doing a lot of walking. And although there may be a lot of shelter from the sun, it is very hot.

As we walked around and admired the beautiful views that the island has to offer, we came across The Dead Sea lake. This was busy with tourists and it’s easy to see why this is such a popular spot to visit. Located in the South of the island, this salt lake is a natural pool made by years of cliff erosion making it a safer option for non-swimmers or those not comfortable with swimming in the sea as the waters are calm and peaceful. 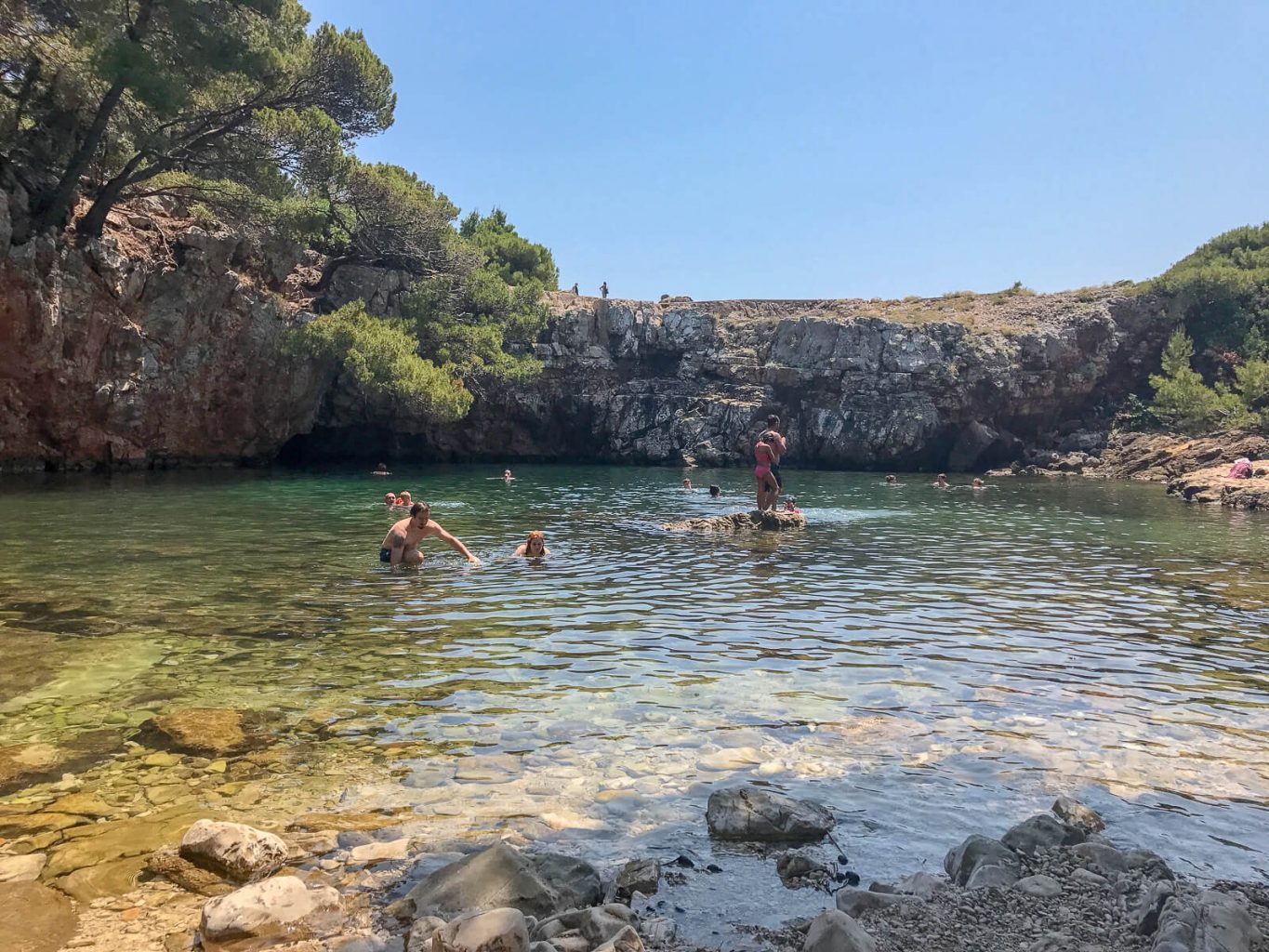 If you are brave enough and this is something that I am definitely not then you may also like to partake in some of the cliff diving that happens at The Dead Sea lake. It looks very fun but knowing my luck, I would have an obscure accident and the fear of that potential is enough to put me off.

While on the discussion of sunbathing, there is also a nudist beach on Lokrum Island. This secluded bay with slanted rocks and stairs to assist you in and out of the sea is almost free from prying eyes. There are kayak and boat tours which pass this area but there is that option if you would like to visit somewhere a little quieter to relax.

After spending some time by the water we were ready to explore a little more of Lokrum. We made our way to the botanical gardens which are home to many plants and trees, most of which were planted in the 19th century and thanks to the dry heat there are some impressive palm trees and cacti to see.

From there, we visited the Benedictine Monastery of St Mary and the Lokrum visitor centre. The Lokrum monastery was built in the 11th century and although badly damaged through time, parts can still be visited and further information can be read during your visit. 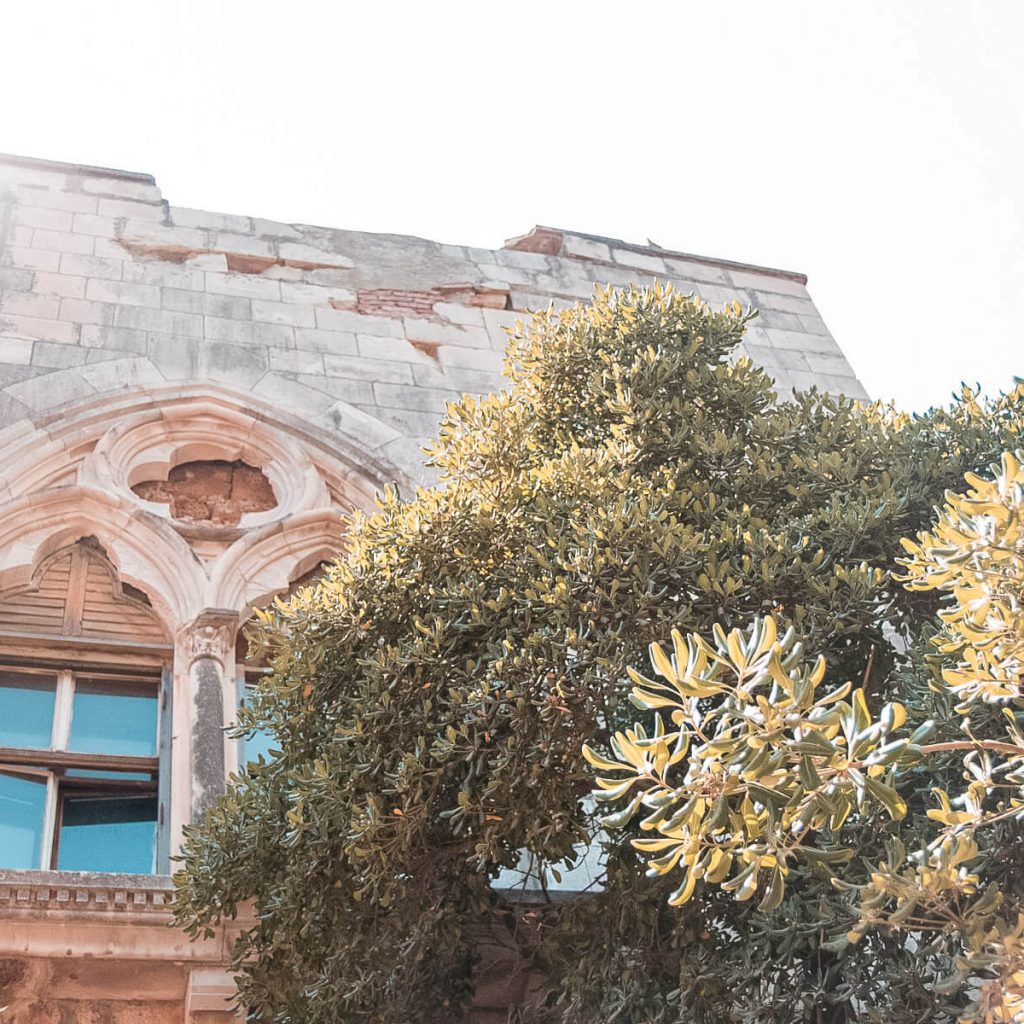 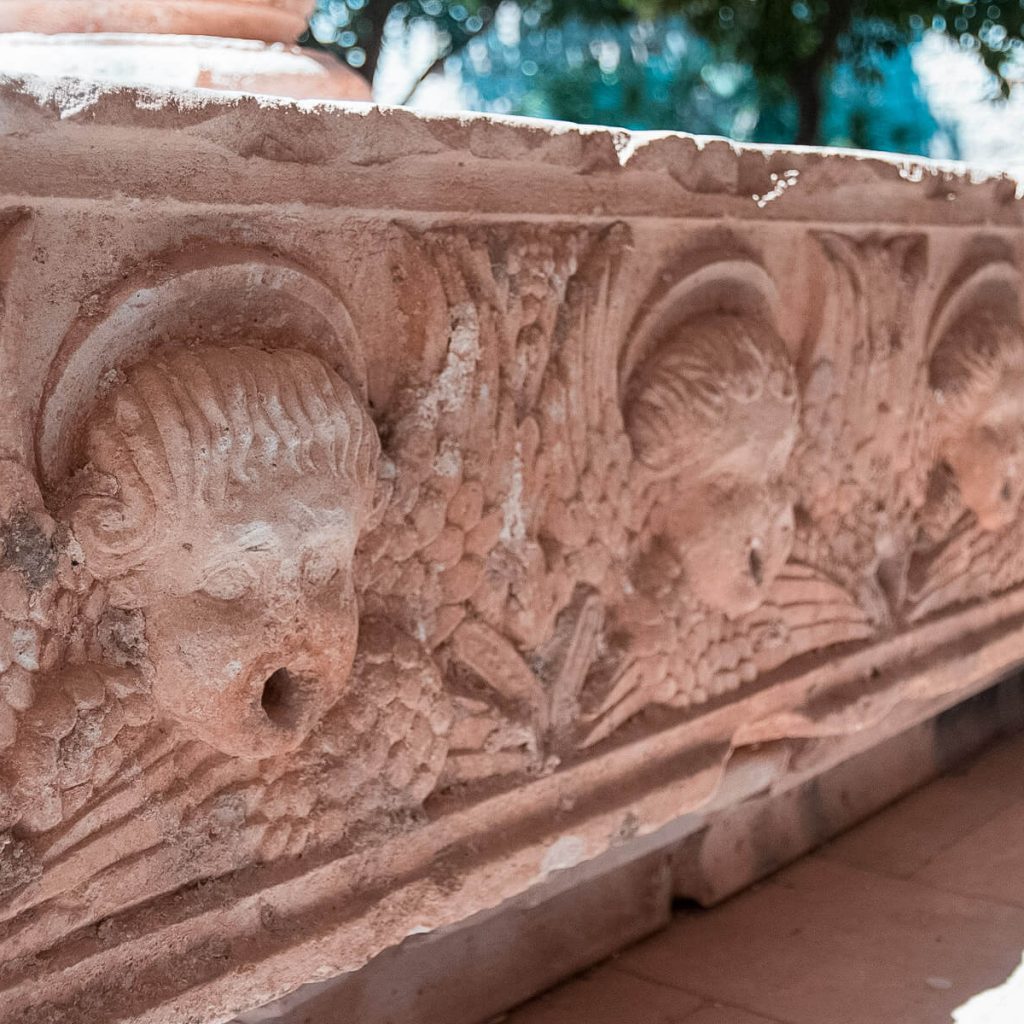 The Lokrum visitor centre will hold a lot of interest for those Game of Thrones fans. It is inside the visitor centre that you will find the replica Iron Throne which was gifted to the island by the show. Many scenes from Game of Thrones were filmed in both Dubrovnik and Lokrum and you will see a lot of tours and information on this while visiting.

The Iron Throne is free to sit on and also freely available for photos although as you can expect due to the popularity of Game of Thrones, there may be a small queue of visitors also looking to take a picture. This queue did move quickly though and people were very considerate of the time taken to allow others the same opportunity which is nice.

By the time we left the visitor centre, we were ready for some food. This was something that we were a little unsure of before visiting Lokrum but there are a couple of restaurants and snack and cocktail bars to choose from whether you are looking for a nice seafood dish to pizza, sandwiches or even some ice cream. I would highly recommend picking up some water while you are here also. Alternatively, you can take a picnic and enjoy some time in the park or one of the many beaches. 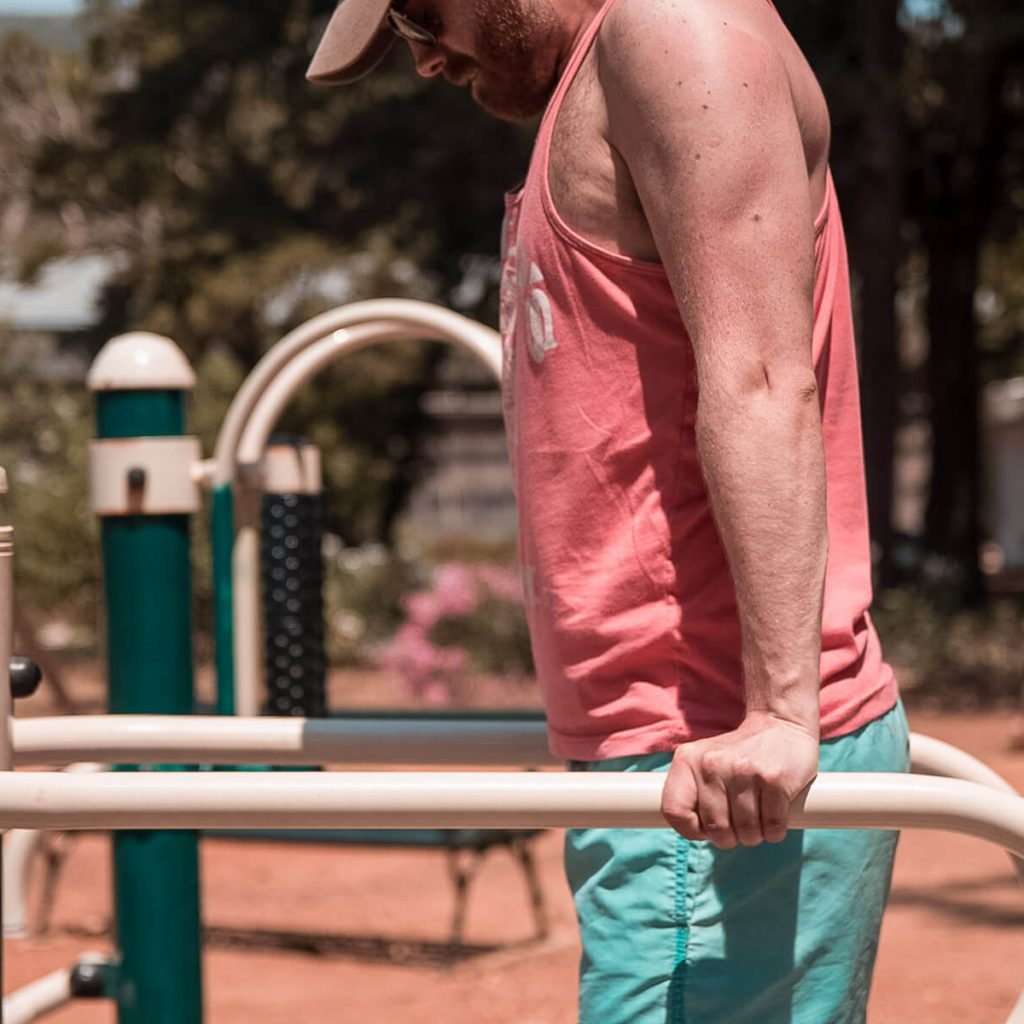 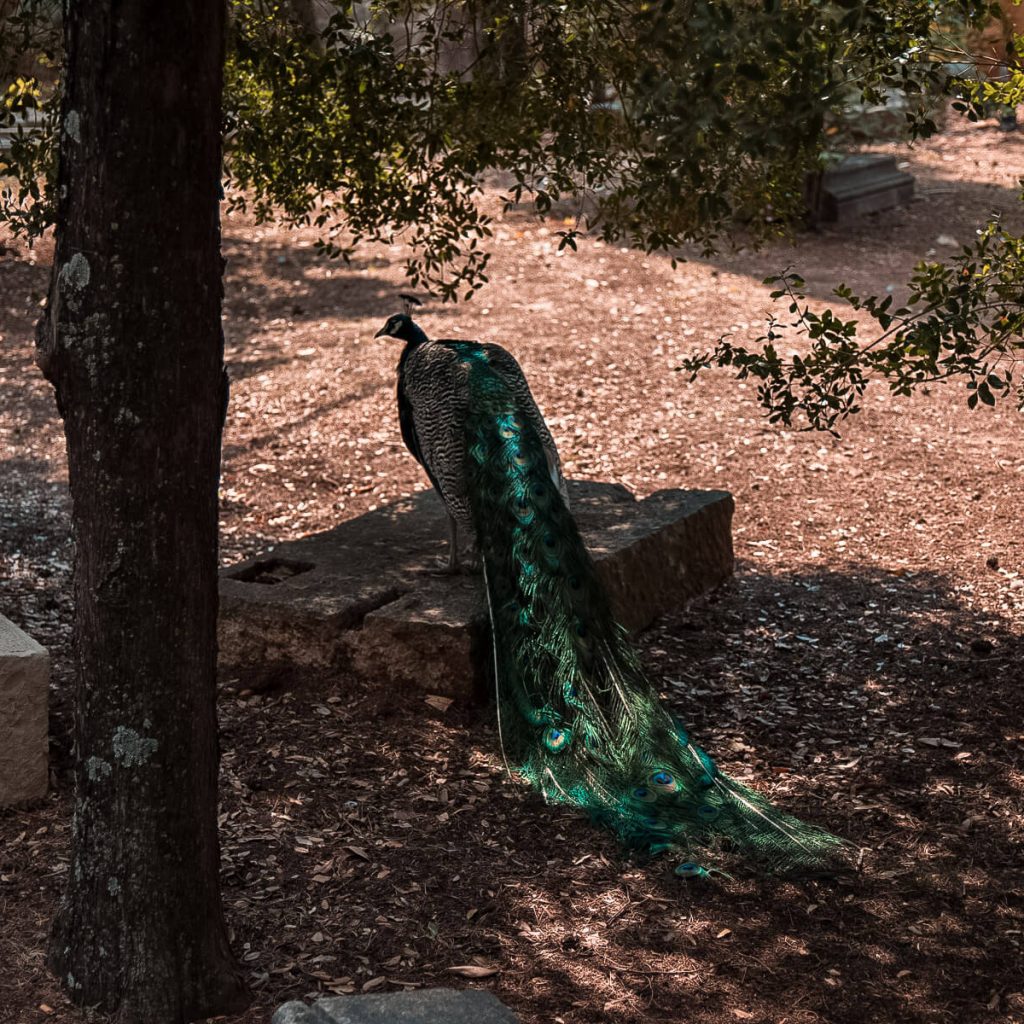 Once fed and watered, we took a wander around the outdoor gym and admired the number of rabbits and peacocks on the island. It was really incredible to get so close to the peacocks, I have never experienced the beauty of them so freely. Obviously, you don’t want to disturb them but they did appear to be very comfortable around people. 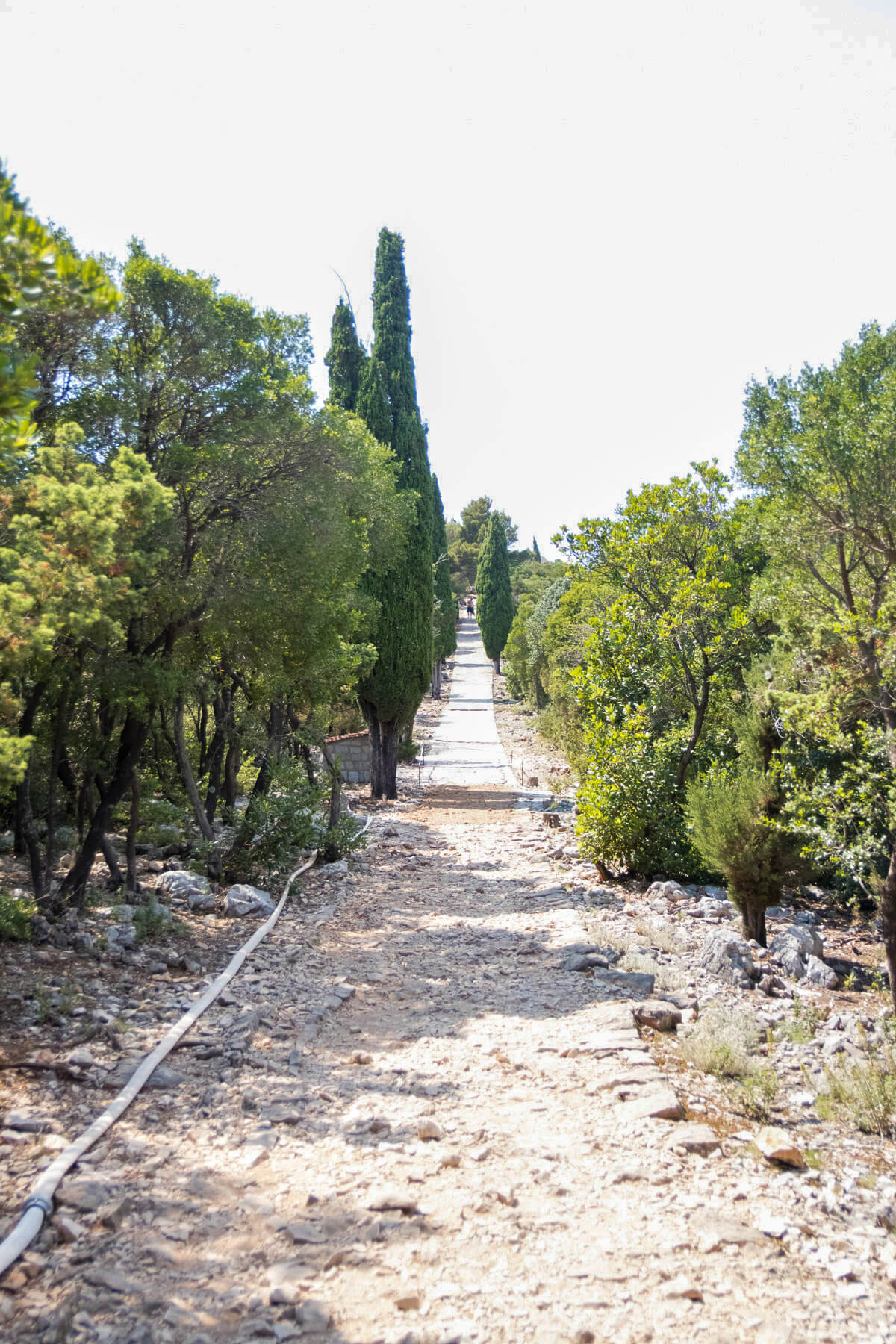 Finally, we took the long walk to Fort Royal which is built on the highest point of the island. This is the reason I urge you to take some water as in the height of the heat, it can be quite heavy going. It has quite an uneven path and we did struggle a little due to our poor choice of footwear but it is possible and we powered through to make it to the top. I don’t know too much about the history of this but at the top of Fort Royal, you will find incredible views overlooking the island and towards Dubrovnik. It took around 20-30 minutes to walk to the peak but again, this is partly due to our poor choice in footwear!

As Lokrum is an uninhabited island and a nature reserve there are no hotels for overnight stays but it is a wonderful place to visit to get away from the hustle and bustle of Dubrovnik old town.

I’ve also read a little about the Lokrum Island curse damning whoever seeks to claim Lokrum for their own pleasure which appears to have come true on several occasions, so perhaps it’s for the best.. 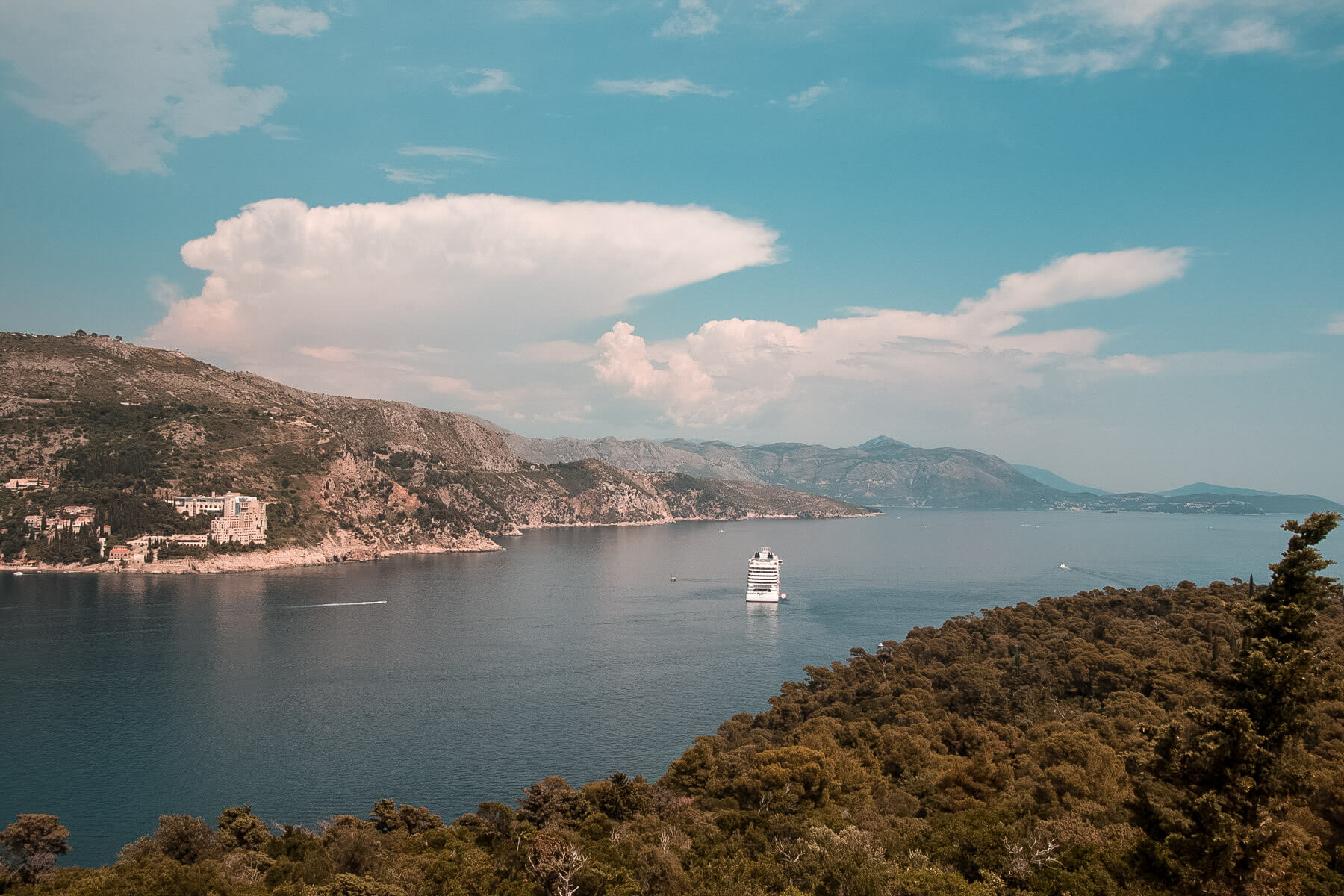 Is Lokrum Island Worth A Visit?

Absolutely! We had no idea what to expect and in honesty, we weren’t expecting more than nice scenery and walks but we were really pleasantly surprised by the size of the island and the number of things to do.
Lokrum Island has enough activities to entertain the whole family whether you enjoy a bit of history, taking a dip in the dead sea or seeing some of the wildlife. There is also an outdoor gym, a park, restaurant and the Iron Throne which was donated by the series for any Game of Thrones fans out there.
If you fancy experiencing Lokrum from a kayak, then why not book a Lokrum Island and Dubrovnik City Walls Kayak Tour?

Where is Lokrum Island?

Lokrum is an island 600m from the city of Dubrovnik.

How Big Is Lokrum Island?

The island is not big, I believe it is approximately a mile and a half long but it does have some steep and rough terrain. While there are many level walkways, don’t be fooled by the size as it does appear much bigger once there.

Where To Buy Lokrum Ferry Tickets

You can easily buy tickets to Lokrum from one of the many stall sellers around Dubrovnik and nearby areas. Tickets cost to Lokrum is approximately 40 Kuna which converts to around £5.

How Far Is Lokrum From Dubrovnik By Ferry?

The ferry from Dubrovnik to Lokrum Island has a journey time of around 15 minutes and I believe that the average Lokrum boat schedule has the ferries leave approximately every half-hour.

Where On Lokrum Is The Iron Throne?

If you are a Game of Thrones fan and are in search of The Iron Throne, you will find this in the Lokrum Visitor Centre. There is ample photo opportunity for this at no cost, you can sit on the throne although there may be a short queue as this is a popular attraction, however, this is fast-moving.

Where To Swim Lokrum Island

Make sure to take your swimming things and take a dip in the islands Dead Sea lake. This is a small salt lake with plenty of room to sunbathe, swim and also dive. This is a very popular location for tourists visiting the island.

What Time Does Lokrum Island Close?

The last boats tend to leave Lokrum Island around 7 or 8 pm depending on the season.