The Aberdeen Altens Hotel has recently invested more than £500,000 in creating a new dining space, The Coast and Keg Bar and Restaurant which reopened in October 2020.

If we’re being honest, I don’t imagine that the Altens Hotel would have been somewhere to cross many peoples minds when looking for places to eat in Aberdeen, it certainly wasn’t on mine, but when I tell you that this refurbishment has given the hotel a new lease of life, I truly mean it, and I now think that this will be a trendy destination for locals and hotel visitors once word gets around. 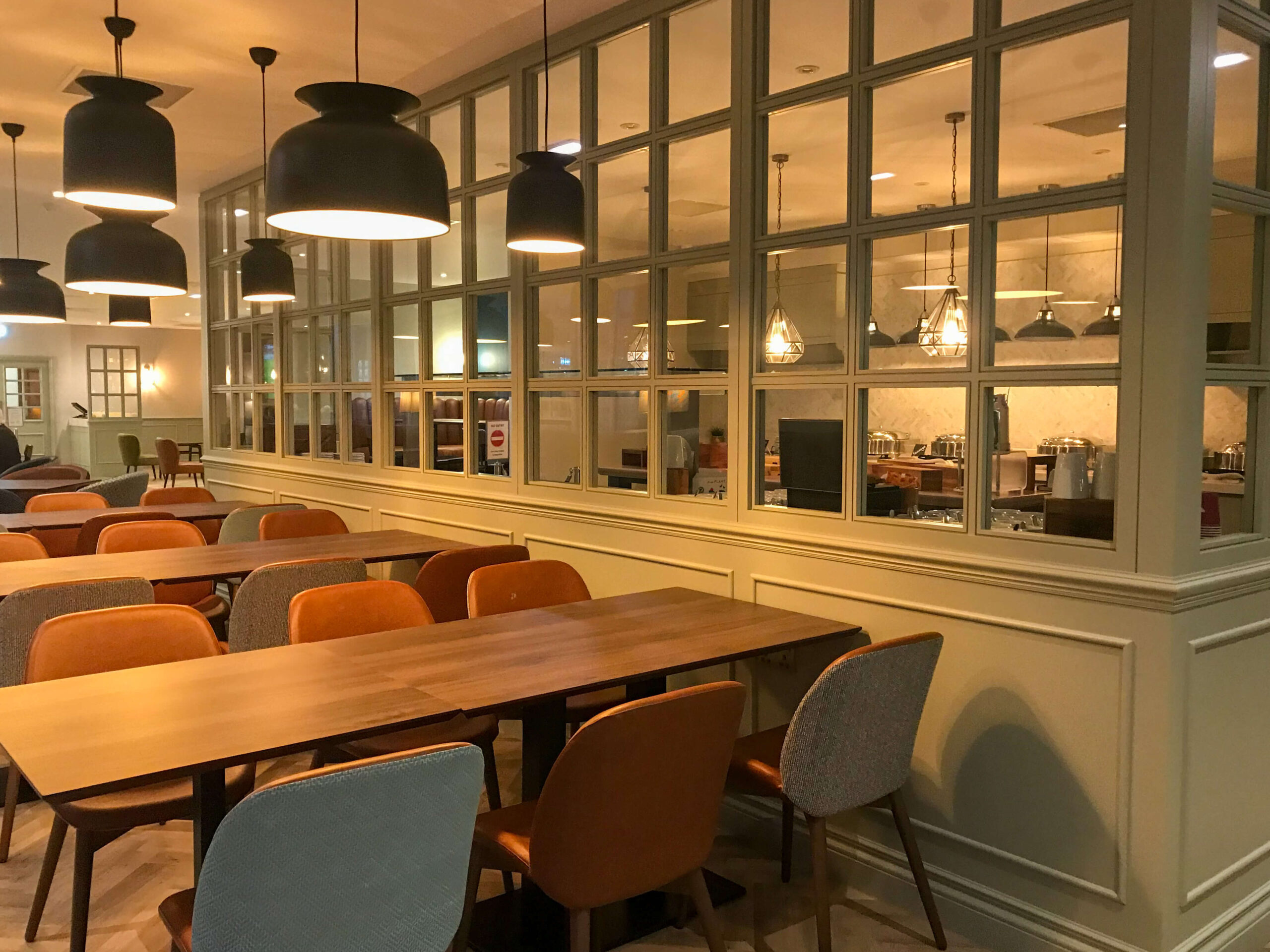 As a side note, this would also be a fantastic place to work if you are looking for some co-working space and especially if the thought of busy coffee shops do not appeal to you at the moment as the Coast and Keg does feature several dining areas, with tables well distanced and many with plugs and USB ports and of course, WiFi and a great menu.

I have often passed the Aberdeen Altens Hotel, and from the exterior of the hotel I had a certain idea of what to expect inside but it couldn’t have been further from the reality and I mean that with the greatest of compliments as I think they have done a fantastic job of bringing this up to date.

We visited not long after its opening, so we were very lucky in that it was extremely quiet at the time that we had booked. In fact, there were only one or two tables occupied as it was later in the afternoon and we had our pick of where to sit, so we chose one of the booths towards the back.

It gave us a chance to look at the new bar, the new menu and appreciate the level of work that had gone into creating this space.

From my understanding, the restaurant previously had separate dining areas but this has been opened up to create one new open plan area while still maintaining a degree of formal and casual, perhaps more flexible dining seating. 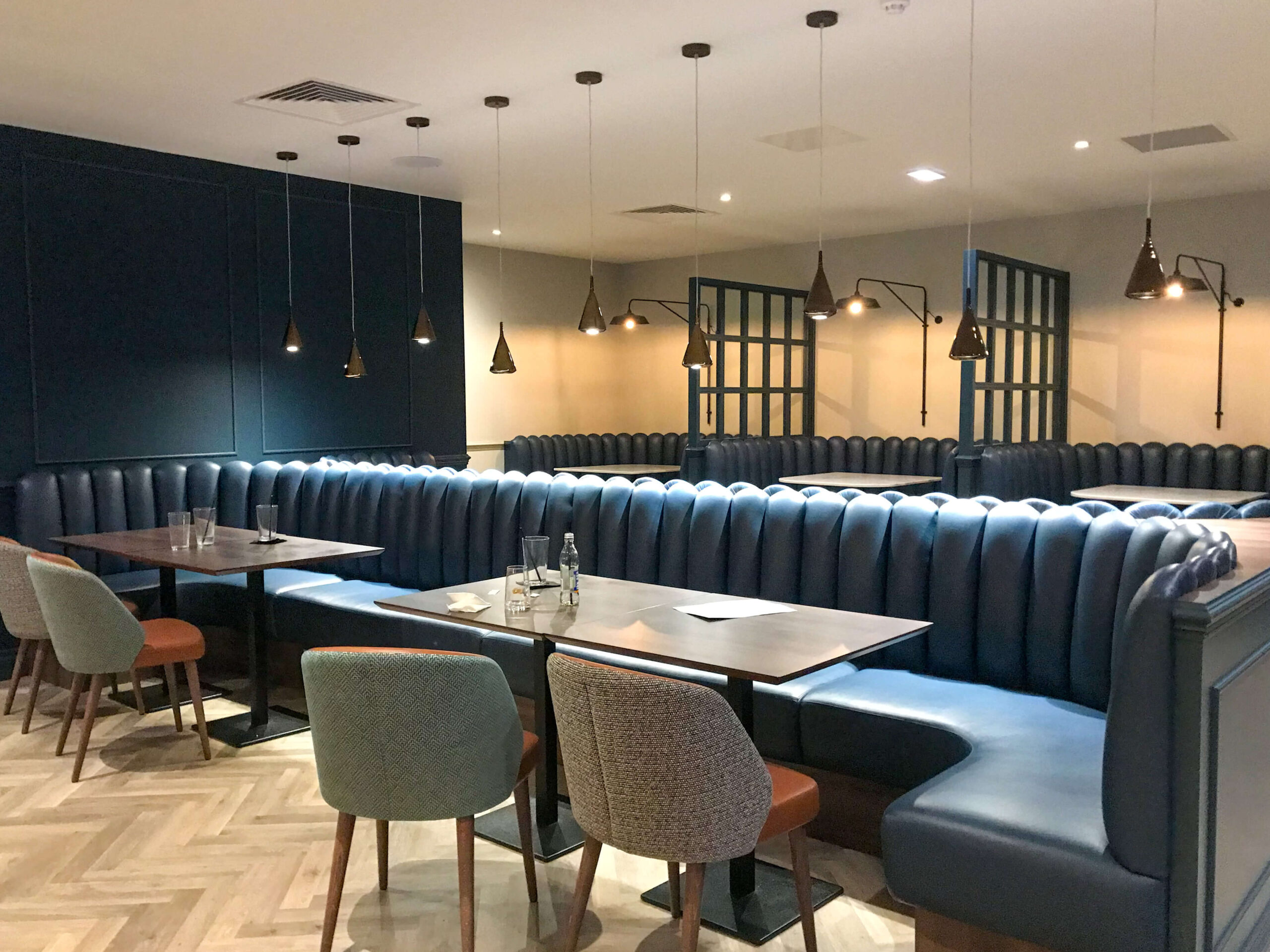 At the time of visiting, I had been looking for somewhere quiet to work so we chose a more casual seating area in the restaurant, and this was perfect as it gave plenty of opportunity to speak freely, get the laptops out, order some food and it left more than enough space for the food, notes and both computers on the table. Which is great, as anyone who works away from home will know how difficult it can be to find a space big enough!

The service was fantastic, very friendly, polite and enthusiastic about the changes that had recently been made, which always makes the experience more positive.

As always, we took some time to take in the surroundings and we thought it looked brilliant, the bar is really long, certainly an eye-catching centrepiece of the restaurant and very well stocked.

In terms of decor, there is a mix of gorgeous tiling and wood on the floors with luxe-looking leather booths, muted sage paintwork and the artwork on the walls features local and well-known figures from Aberdeen history and culture which created a little competitive game of who’s who!

Every detail has been considered which creates a welcoming and relaxed environment that it is not to be overlooked. From the lighting to the TV and those all-important sockets and USB points that I mentioned earlier!

The menu describes itself as serving ‘a range of modern dishes and home-cooked classics and light bites and snacks’ with Chef David Proctor using a lot of seasonal dishes utilising fresh and local producers where they can. The Aberdeen Altens menu is more varied than I expected, you can find the usual burgers, sandwiches, pasta and pizzas but they do also have a couple of seemingly random options (in comparison to the rest of the menu) thrown in which really intrigue me such as the tiger prawns, the Singapore noodles and the Cambodian street style vegetable curry.

We decided to order some starters and mains because we were working and we were there for the long haul!

So, to start, we had the Fresh Tomato and Basil Bruschetta, which, although a small portion, was really delicious and tasted fresh. The vegetables didn’t at all feel as though they had been sitting out and still had a lot of bite and flavour. Although at first, it did look like a small portion, I think it was enough but if you are looking for more food for your money, our next starter and possibly some of the others available would be more suited for the same cost.

We also ordered the Loaded Nachos. They were nice, but nachos are nachos and I’m not too sure they much much description! The tortilla chips were lightly salted and very crunchy, the dips were nice and the cheese was melted. I would have perhaps liked the cheese to have been a little layered as you just had this solid section of cheese on the top and dry crips underneath but.. I love crisps and dip so it wasn’t an issue for me. 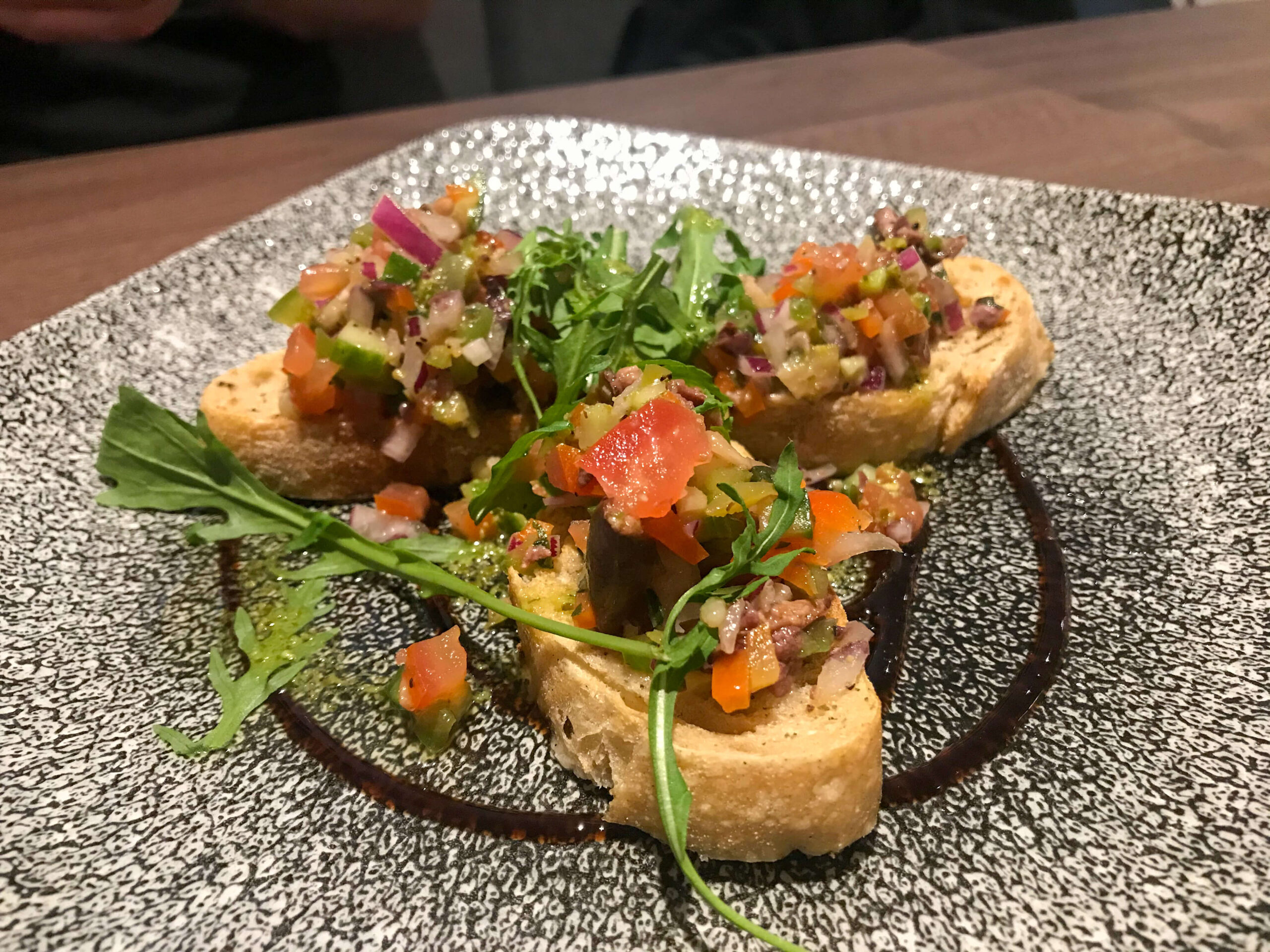 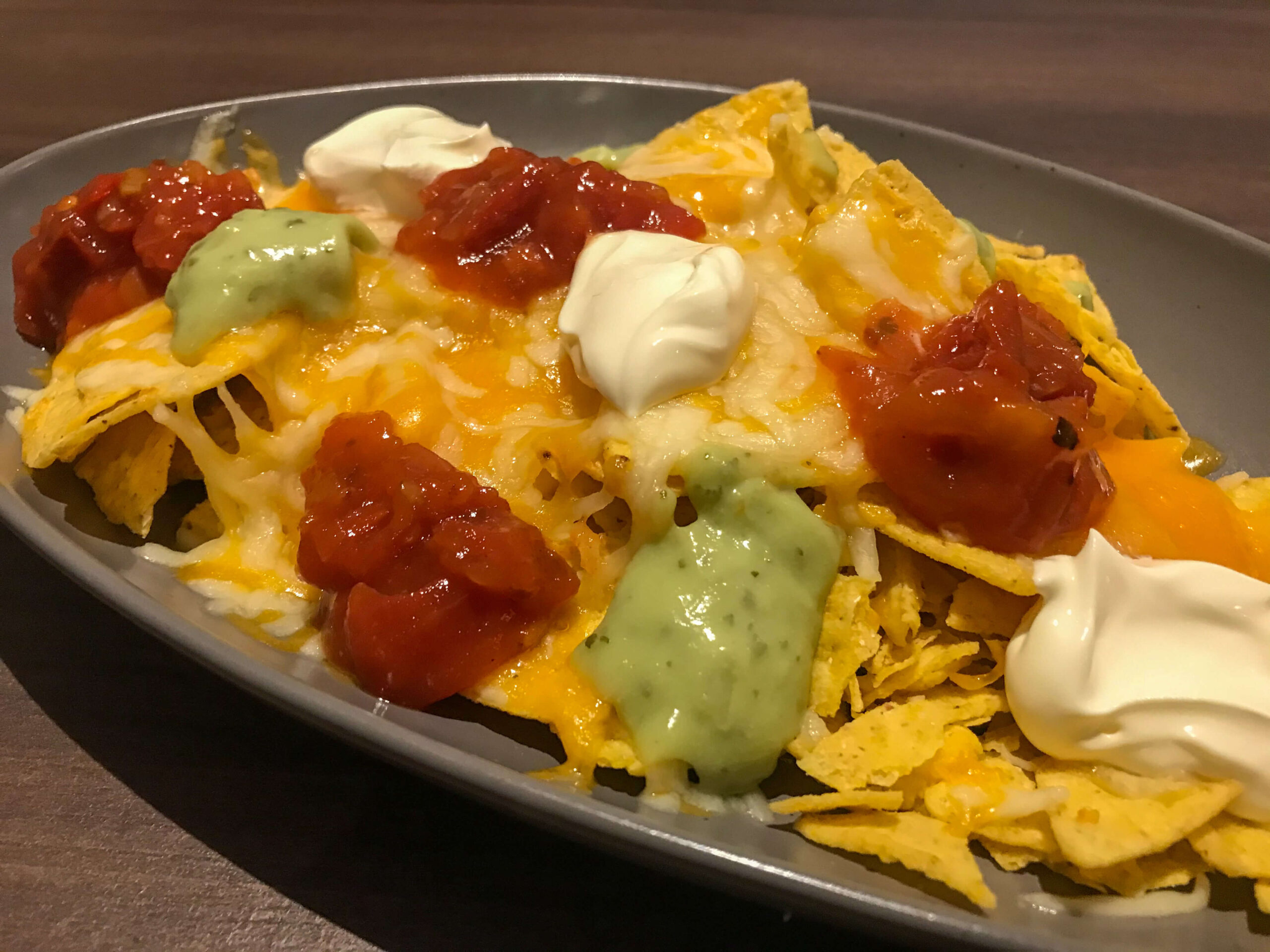 For main, I ordered the Macaroni Cheese which came with chunky chips and garlic bread. The garlic bread was delicious, a pizza bread rather than the crunchy baguette slices that you often receive. It was so warm and soft and just, very tasty. The chips were again, very tasty, fluffy and warm. A stronger cheese or a little bit of mustard would not have gone amiss!

The macaroni cheese was just ok though. Nothing wrong with it but it was just too mild, there was little to no flavour although the consistency was nice. I appreciate that two kinds of cheese were used but there was only flavour in the cheese used as a topping and not in the dish as a whole.

We also ordered the Gourmet Beef Burger served in a brioche bun with gem lettuce, ranch
dressing, beef tomato, red onion and French fries. The burger patty definitely felt handmade, it was a slightly odd shape if it was bought but it was thick, somewhat chargrilled which is not a flavour that I like personally, but I know many people do. It was a very nice meal altogether, it felt fresh and one thing that you could not complain about is the portion size of the mains. 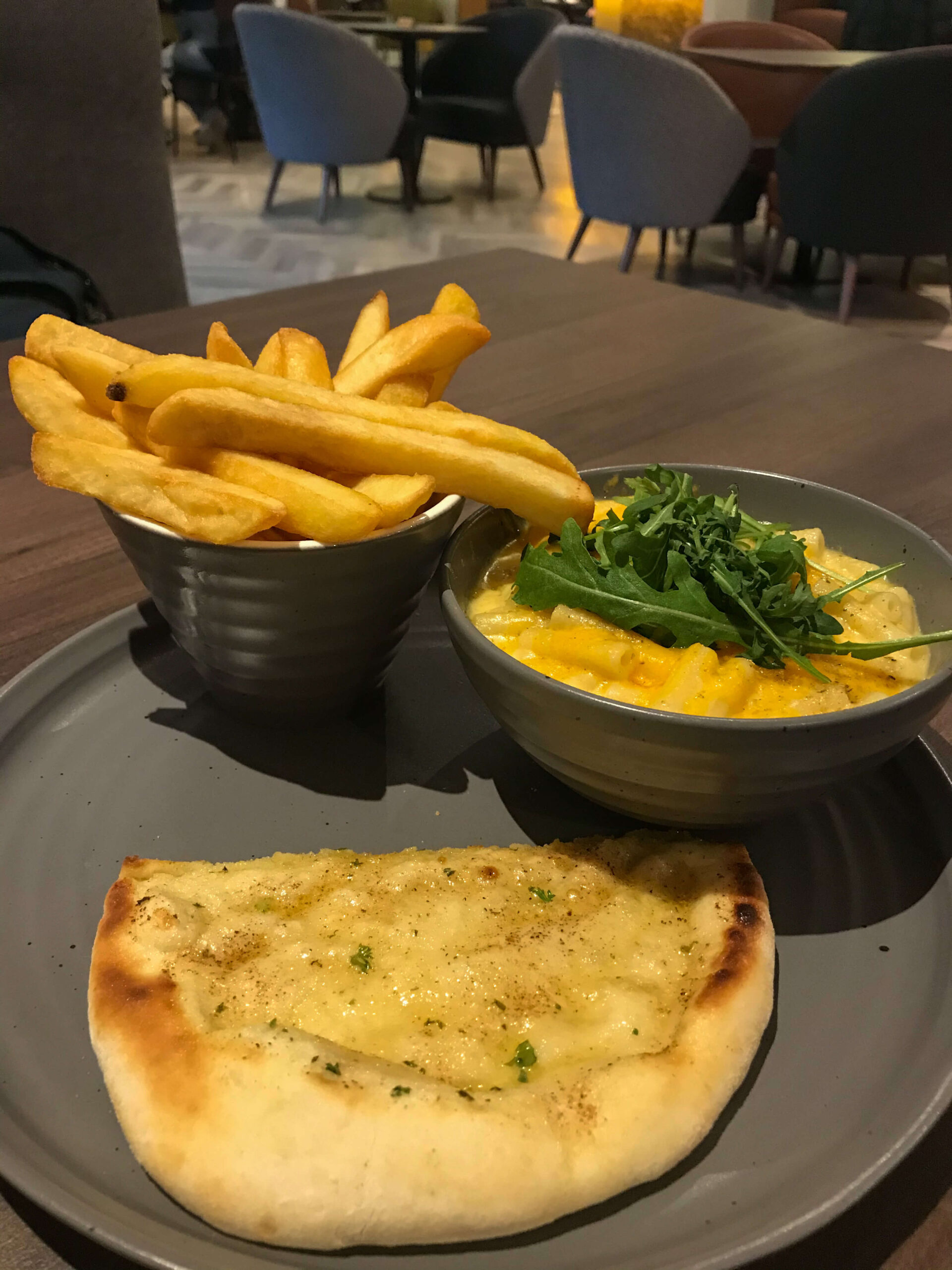 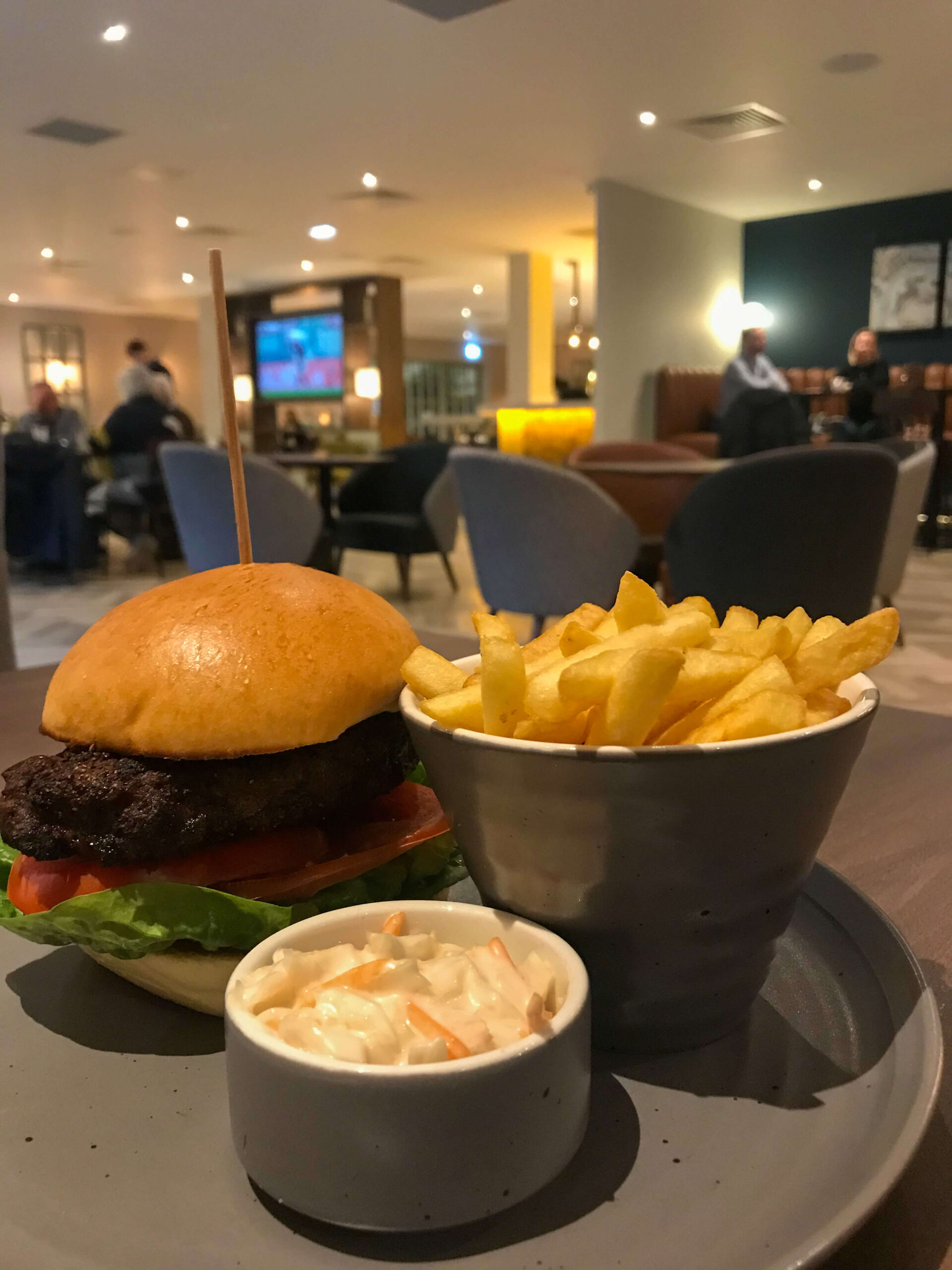 After our food, the lights were dimmed and we grabbed some teas and coffee which were served in Starbucks mugs, another wee treat that I wasn’t expecting. There was absolutely no feeling of rush which was lovely and we continued to work and chat as time passed us by.

I would happily return to try some more of the menu as it was had such a lovely environment and was affordable.

I would recommend popping in you are nearby!