Scotland is world-renowned for its whisky (and of course, the drinking culture to suit), so it’s nice to be writing about one of our other alcoholic contributions, the Isle of Harris gin.

Gin is undoubtedly the drink of the moment. It seems there is no avoiding it and however you like yours, it appears as though everyone is getting in on the action.

With that being said, I am so glad to see that there are so many fantastic Scottish gins making waves in the industry. And better yet, that one of the gins making headlines is from the Outer Hebrides. My home and somewhere I am fiercely proud of.

We recently visited the Harris gin distillery during our last trip home and although not our first time to visit, we did decide to book ourselves on the distillery tour this time around. 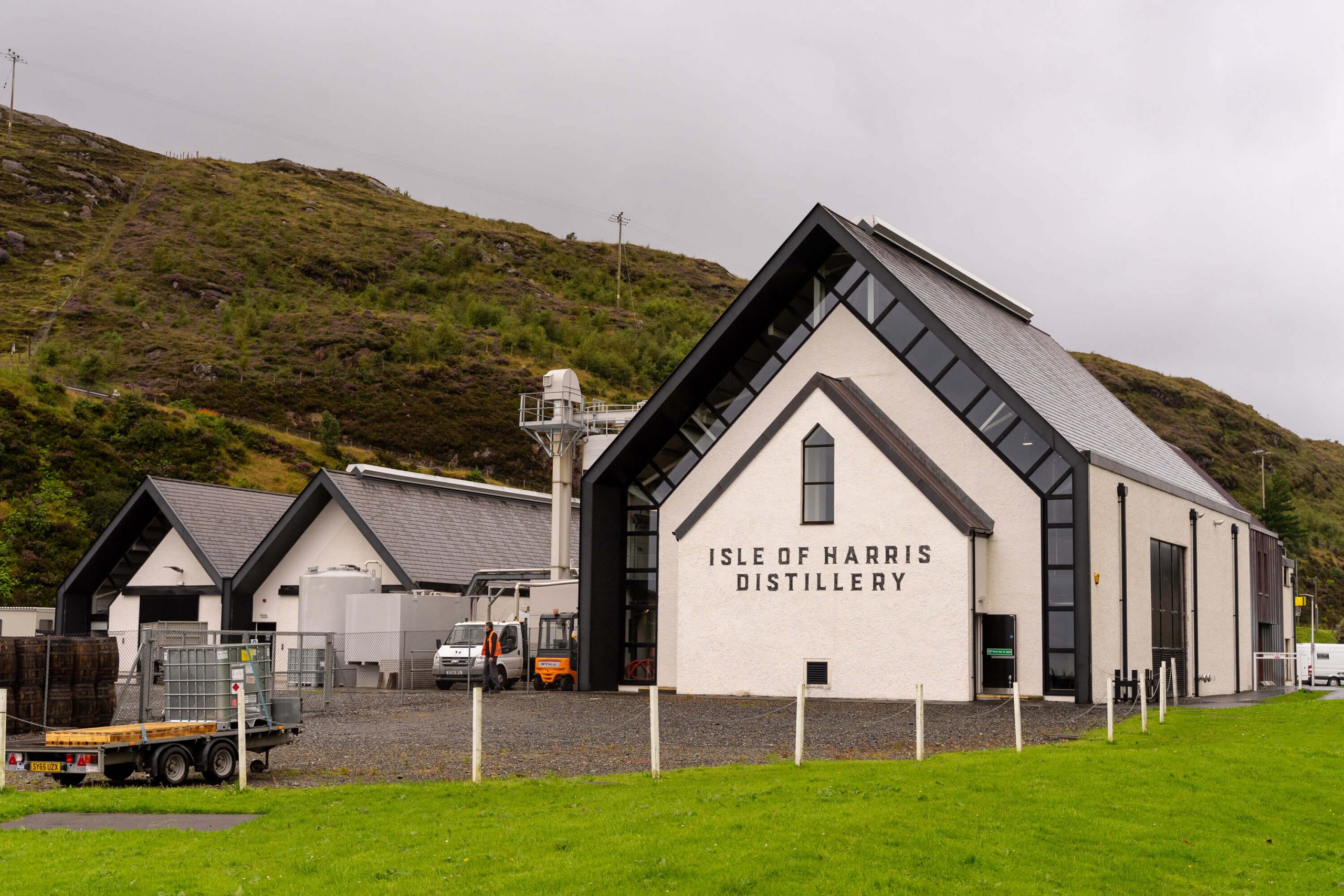 Since opening their doors on 24th September 2015, I believe they had over 90,000 visitors in their third year which is a huge accomplishment for the islands and has made itself one of the main tourist attractions for gin lovers when visiting Scotland.

The Harris gin distillery Scotland has grown from a team of 10 people to 40+ within a short time, 95% of the staff are local which is great for the people on the island as it creates sustainable employment.

In choosing locals to create the products as opposed to curating a team of already experienced distillers from elsewhere, a lot of training was required as many of the staff had no knowledge of this profession but with a lot of passion and care, they are now leaders in their own right. 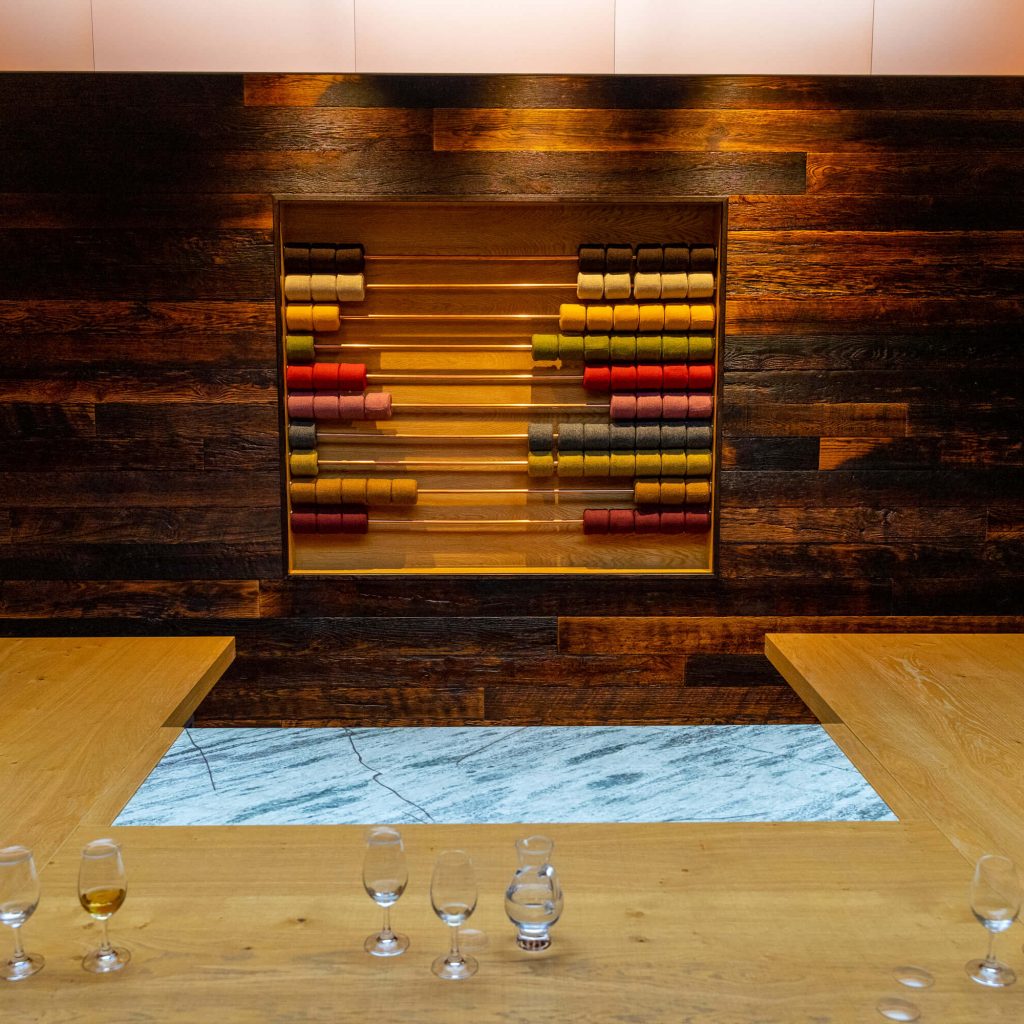 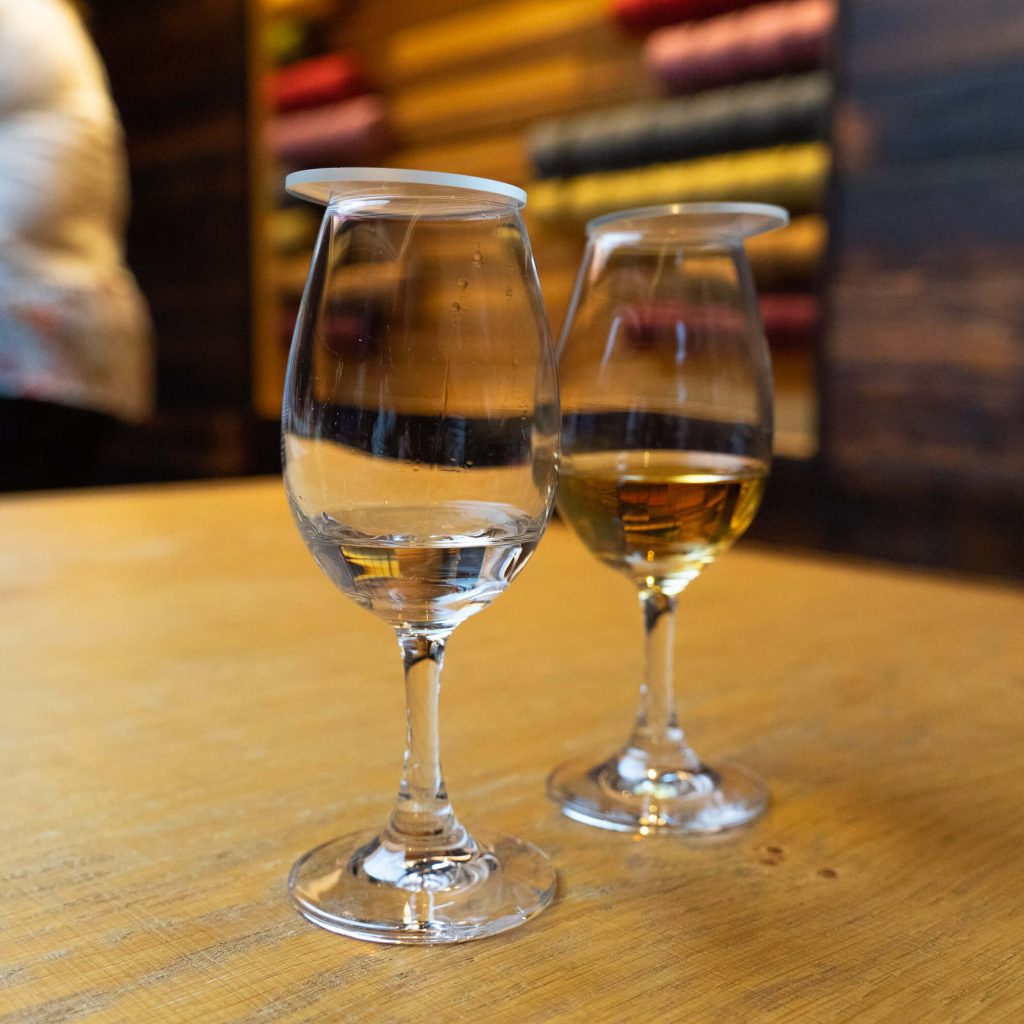 Firstly, I will not give too much of the tour away so we will skim over what you can expect.

The Harris gin distillery tour started with some background information on the brand, the owners and supporters and of the story behind the gin.

We were then told of stories behind the distillery and received some initial tasting of The Hearach single malt whisky along with a number of jellybeans which showcase the different flavours used.

You will get to visit the copper stills in the Spirit Hall including ‘The Dottach’ which was the first small copper gin still used to create the Isle of Harris gin and is named in honour after a small and fiesty local woman from the island who is fondly remembered. 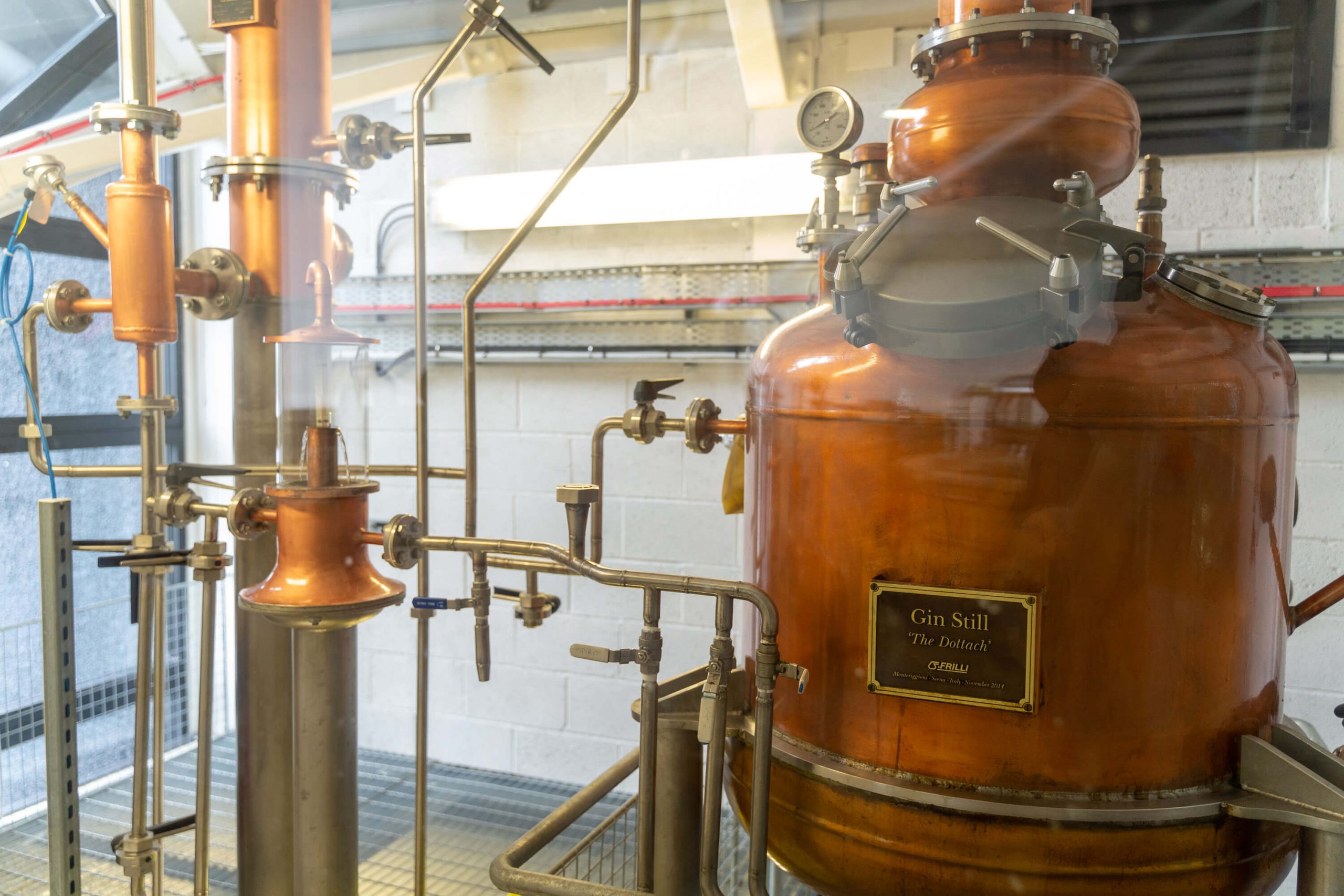 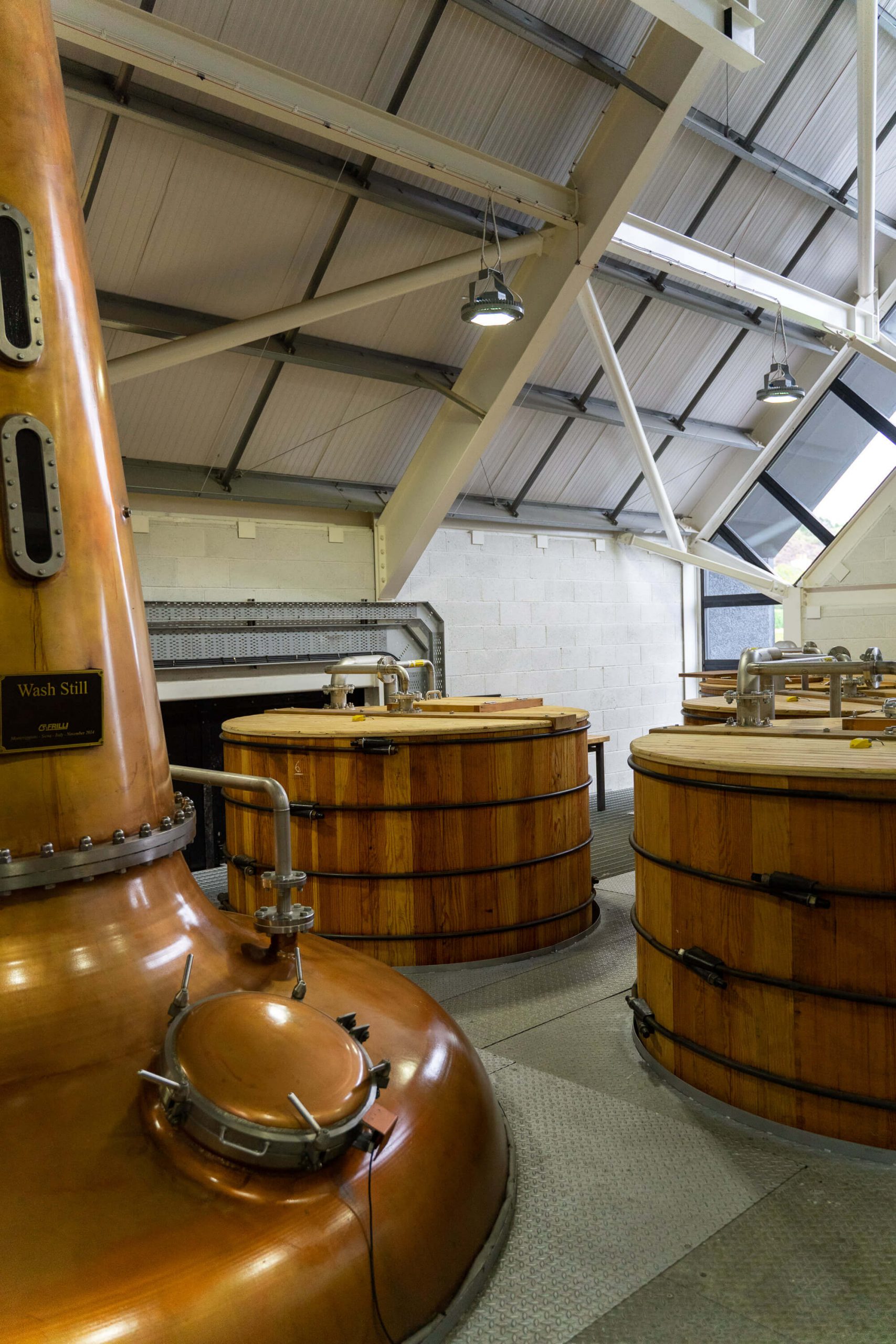 The Isle of Harris gin is created in 72 hours and you will hear more about this process along with some lovely anecdotes and stories during the tour.

Finally, you will visit the private casks and The 1,916 stave wall in their warehouse. You may see some well-known names so keep an eye out for those! 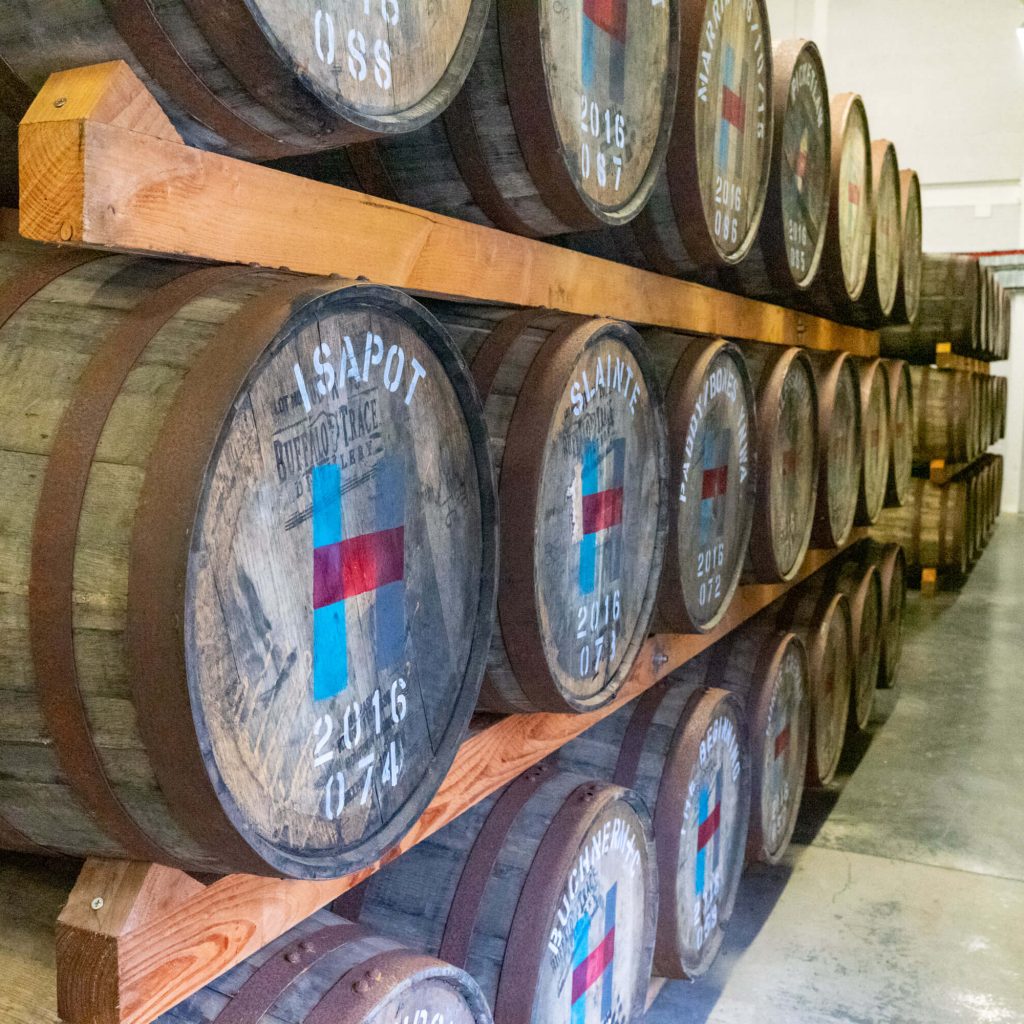 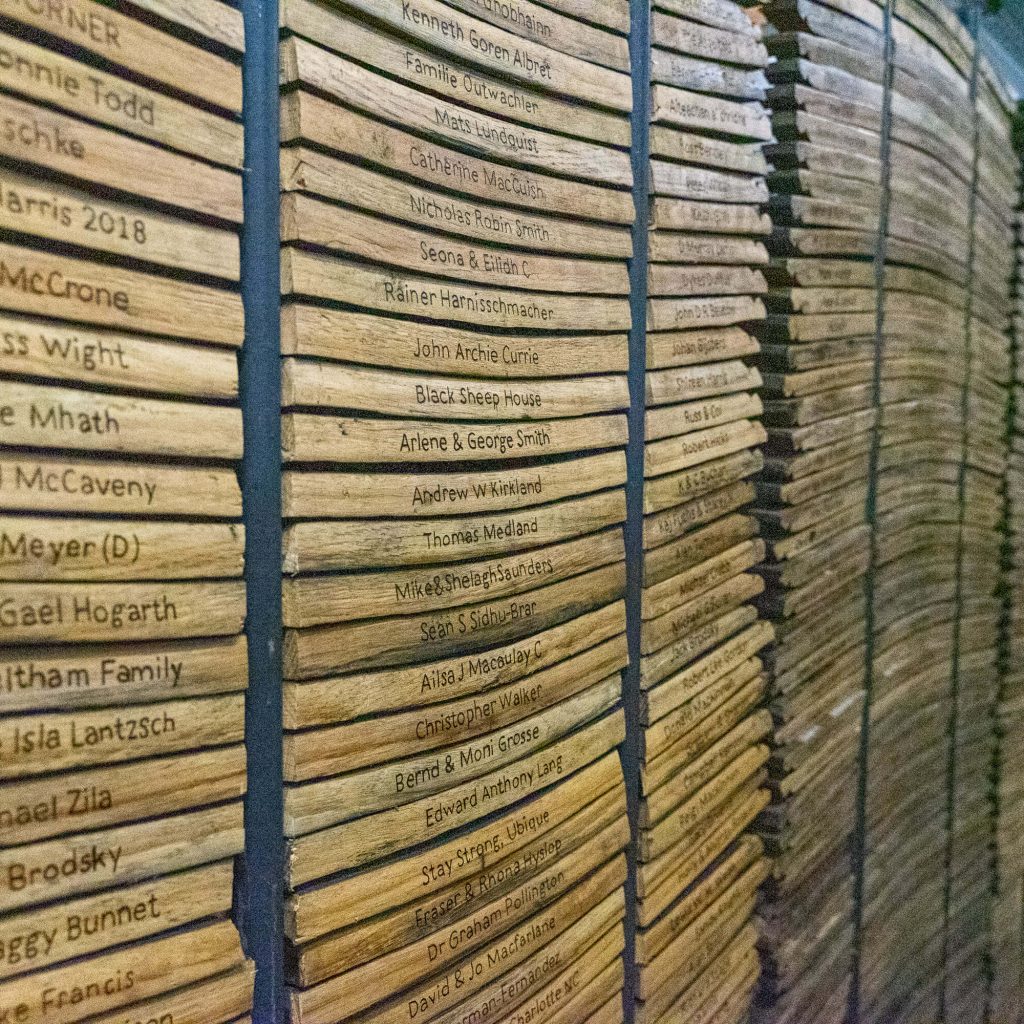 The tour is priced at £12 per person and £6 for children (ages 5-18) and is something I would highly recommend booking in advance to save on disappointment. We had looked into the tour a couple of times before during peak summer season but it was always fully booked, I would advise that it is always best to call ahead and never assume availability.

How long does the Isle of Harris gin distillery tour last?

Distillery tours are limited to only 12 people so this is a very personal and unique experience to have.

The tours last just over 1 hour and are family-friendly. We had three children on our tour and while the adults were provided with gin and whisky tasting, the children received some jellybeans and juice.

All stories and sensory activities were engaging towards the children to avoid any boredom on their behalf but did not detract from the nature of the tour itself.

The Isle Of Harris Gin Flavours

The other and equally important ingredients used are juniper, cassia bark, coriander seed, Angelica root, bitter orange peel, cubebs, liquorice root and orris root along with the use of local low-mineral rainwaters which are some of the softest waters in the UK and help to soften the spirit.

The Isle of Harris Gin Bottle 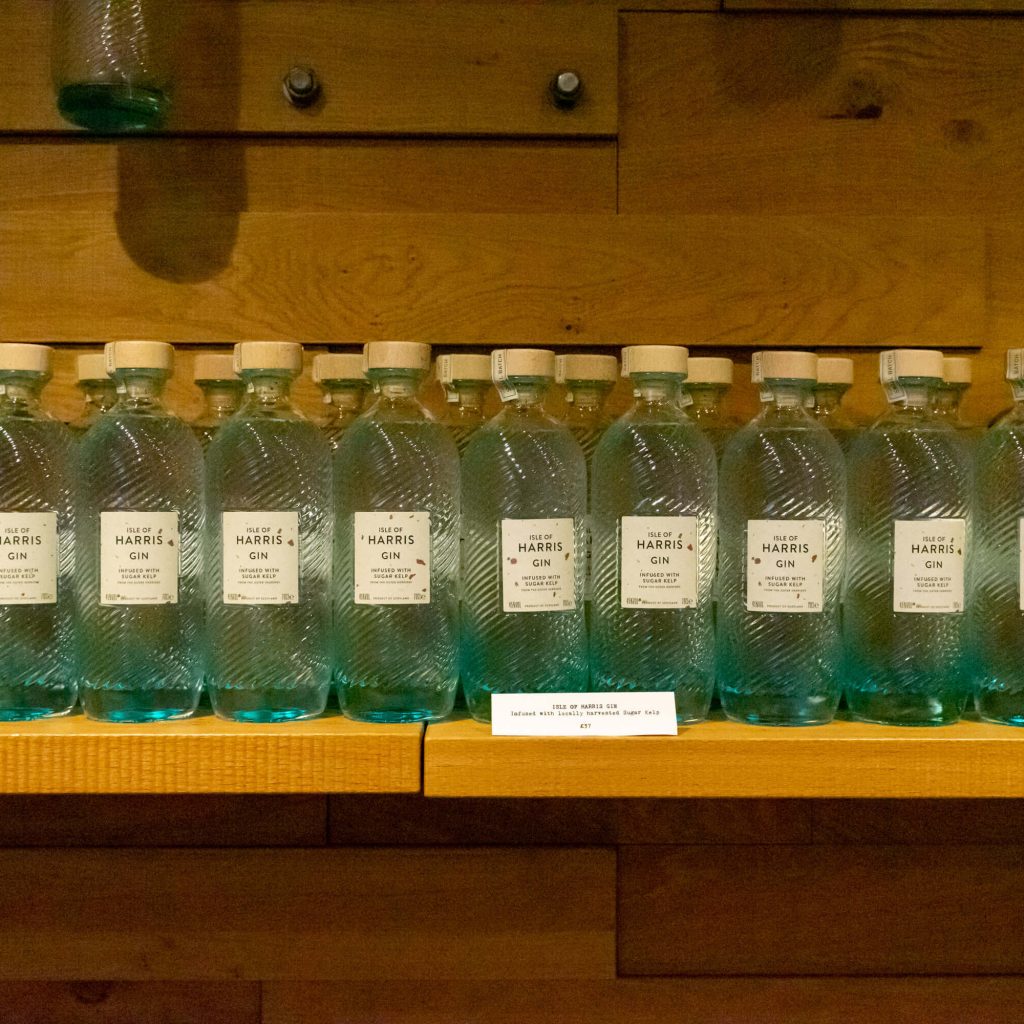 The bottle of Isle of Harris gin is one of the most beautiful spirit bottles I have seen and I genuinely mean that. It’s no wonder they are becoming collector’s items in their own right and often being transformed into things such as lamps or simply being sold as an empty bottle for decoration.

I believe that the bottle of Harris gin is one of the greatest designs I have seen in a long time, with so much thought placed in the details and in maintaining the spirit of the island.

Every gin remains at the roots of the island is distilled and bottled on the Isle of Harris, within the distillery, there is no big warehouse further afield.

The bottle itself is made of thick glass, which is quite heavy to hold but in that nice way. With an aquamarine blue base and ripples up the body which echo the feeling from the waves on the beaches that Harris is so well known for. Alternatively, it may evoke thoughts of the weavers loom and the infamous Harris tweed created on this island.

There are 20 variations of the paper label which have flecks of copper and kelp.

The cork, which is debossed with the Isle of Harris distillers logo is made with great craftsmanship to allow ease of access and sealing of the gin and the label which seals each bottle before sending shows the co-ordinates and postcode of the Isle of Harris which I think is a thoughtful touch.

And as a final touch, on the bottom of the bottle, there is a Latin inscription ‘Esse Quam Videri’ which means “To Be, Rather Than Seem To Be” which serves as a reminder to remain authentic.

How To Serve Isle of Harris Gin

While on the gin tour, we were given a taste and recommendation of how to best serve the Isle of Harris gin.

Now, I know that everyone will have their preference when it comes to how they like their gin but maybe this is one to try.

We were advised to try with a pink/red grapefruit garnish, tonic water along with some of the Sugar Kelp Aromatic Water which should take some of the bitterness away from the original gin description, making it smoother and sweeter to taste.

The Hearach single malt whisky is the latest offering to come from the Isle of Harris Distillery. This will be the first whisky (legally) to come from the island and its release is still hotly anticipated.

The Hearach has not yet been released to the world and we don’t yet know when it will. It will be ready when it’s ready! That’s what we know for now. You can’t rush perfection after all.

So, while we wait for the new bottle to be unveiled (even the staff have no idea what it looks like!), there is very little that we know about this new product.

At the beginning of our gin tour, we were given a little information as to The Hearach single malt whisky that is being made.

Obviously, this has not yet been released and I don’t have full detail confirmation on the accuracy of this at moment but I believe the flavours used are along the lines of the below as this was shown to us using a coloured tweed abacus which matches and highlights many of the tastes and undertones used.

We know that up to 70% of the flavouring and colour comes from the casks and the casks have been carefully chosen and much like the Isle of Harris gin, The Hearach will be distilled and bottled locally on the island.

Described on the website as ‘Medium peated, to evoke the gentle whiff of village fires, it will combine spirit drawn from both our bourbon and sherry barrels in careful balance’. 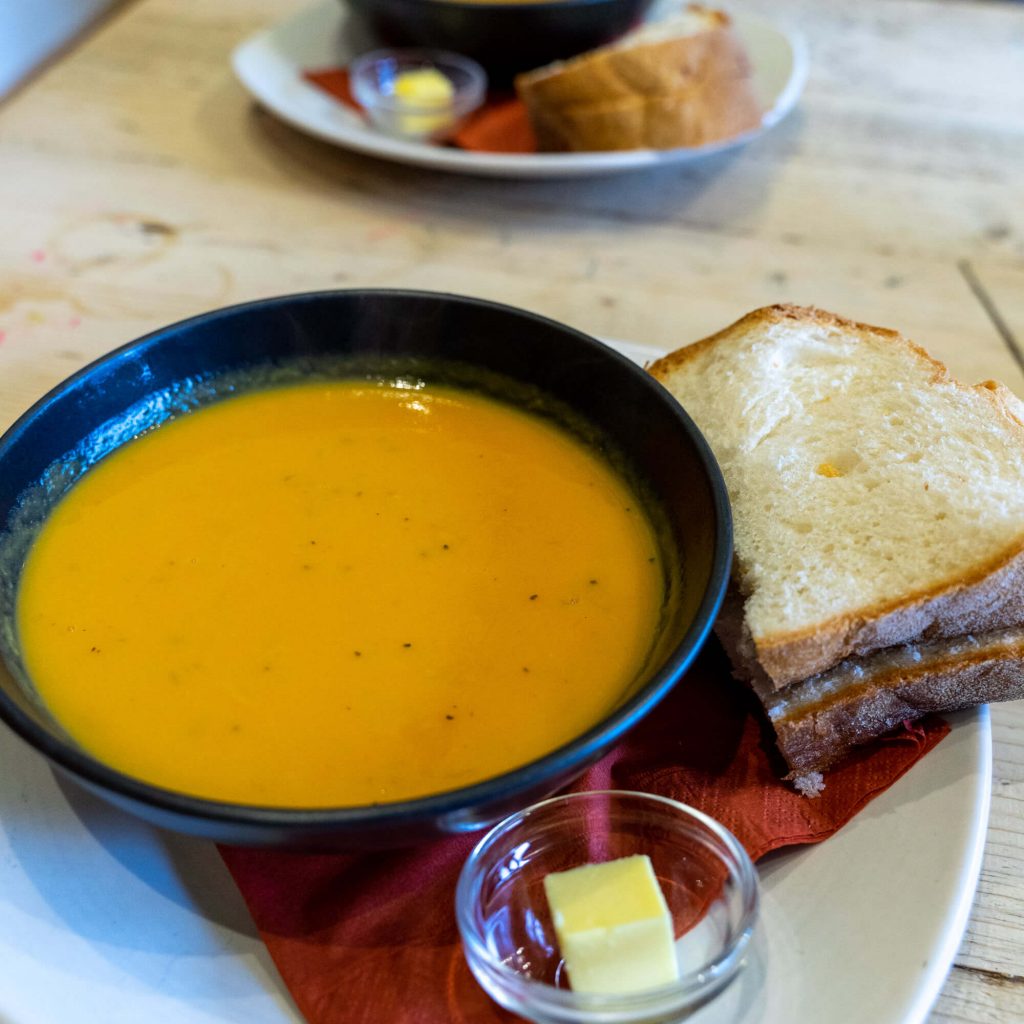 The distillery cafe is not one to miss on your visit, especially when visiting on a cold and blustery day as they do some of the best soups on the island but along with serving delicious hot soups, there are local seafood dishes, cheeses and pâtés or if you are looking for something sweet there is plenty of home baking to try.

You can also take the opportunity to try some craft beers, the Isle of Harris gin or one of the many tea and coffee options available.

The majority of seating consists of large oak benches, alternatively, you could take a drink and sit by the warm peat fire at the distillery entrance.

Once the tour has been completed, or perhaps before its starting, if you are early, you can spend some time exploring the distillery shop. Whether you are looking to buy or share a Harris gin gift of the Isle of Harris gin, Isle of Harris gin glasses which are a similar design to the bottle, gin tea, coasters, postcards, skincare products or even a Harris gin candle.

The shop may not be large but there are plenty of items on offer for purchase to remember your visit to the Isle of Harris distillery! I love the Harris highball and the Harris martini which come with two glasses and a bottle of the Isle of Harris gin in a beautiful gift box. This would be a gorgeous gift to yourself or a loved one.

Where Can I Buy Harris Gin?

The Isle of Harris gin can only be bought directly from the Isle of Harris so head on over to this Scottish gin distillery! Not quite. But you will not find it sold in supermarkets although you may find it being sold in some shops and this irks me on your behalf but we’ll get to that.

There are a couple of options available for the purchase this, you can order online from the distillery website itself and this will be delivered to you within 3-5 working days as it comes straight from the source.

Alternatively, if you require something quicker, there is the option of a pick-up in which selected stores are Isle of Harris gin stockists, you pay online at the official Isle of Harris distillery website and select your preference of click and collect store. This can be collected almost immediately.

What irks me is that I have seen many stores who are selling the gin off the shelf for a much higher cost which I feel it’s disrespectful to the brand who have chosen not to sell in that way and want to maintain the selling rights of this to the island.

But for your sake, do not be duped into paying a much higher cost for this and please use one of the methods above to support this brand and save yourself a little money!