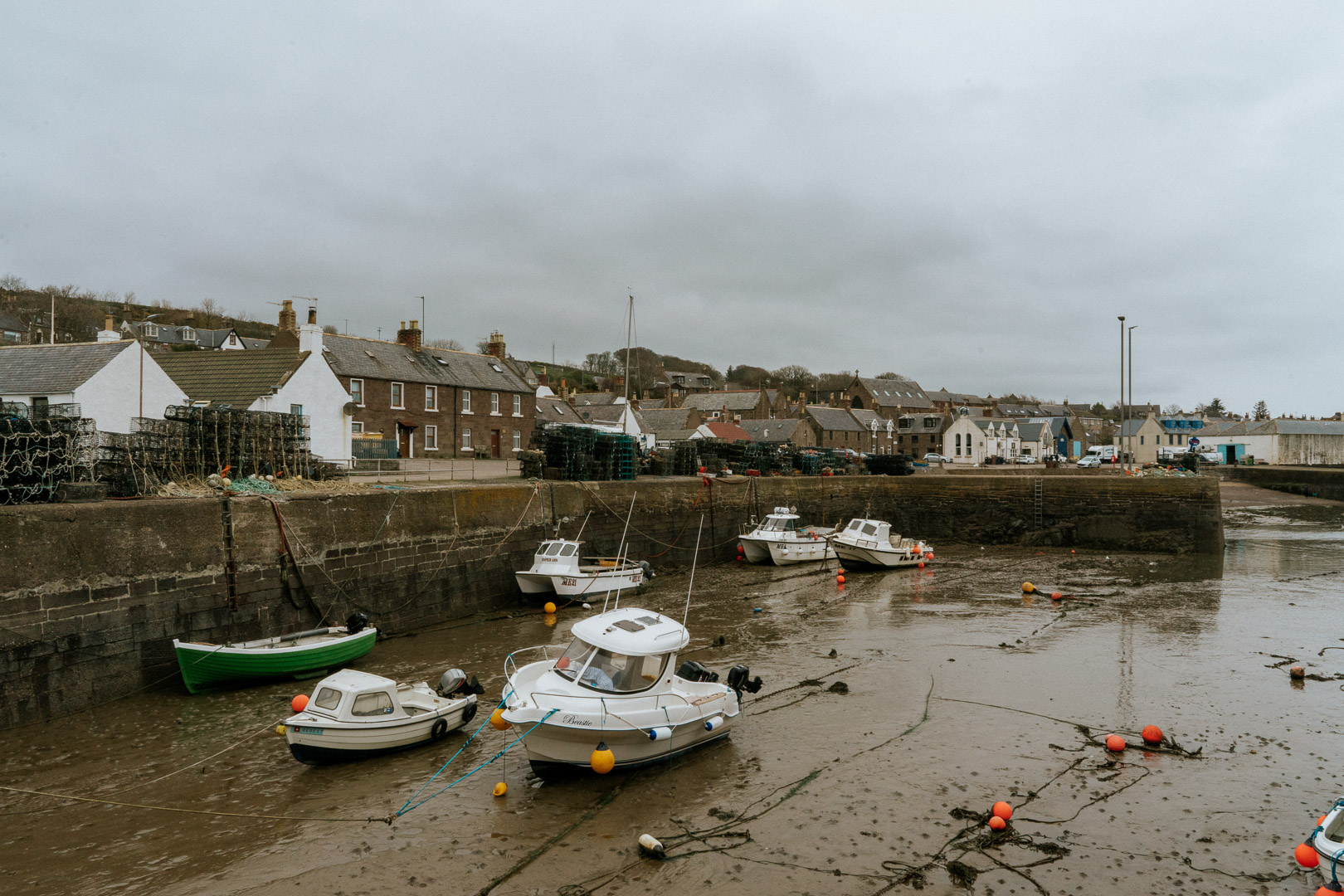 Johnshaven is a lovely coastal fishing village in Aberdeenshire, Scotland. You can find it, along with the nearby villages of Gourdon and St Cyrus, around 30 miles south of Aberdeen city and 10 miles north of Montrose.

Until recently, I had only visited once before, and it was an awful day for it, a really poor decision on my part. So, I knew that I would have to return and see it in a better light, and I am so glad that I did!

Johnshaven is a fishing village and it’s clear to me that the fishing industry is still a focus in the way of life here.

There isn’t an awful lot in terms of things to do in Johnshaven, but there is certainly no shortage of appreciation for this picturesque village. The locals are friendly, there is a strong community spirit and it’s definitely somewhere to sit back and enjoy the slower pace of life.

When we returned for our second visit, admittedly, it was with the sole intention of visiting The Lobster Shop but we couldn’t help but want to find out a bit more of the Johnshaven history while we were there. 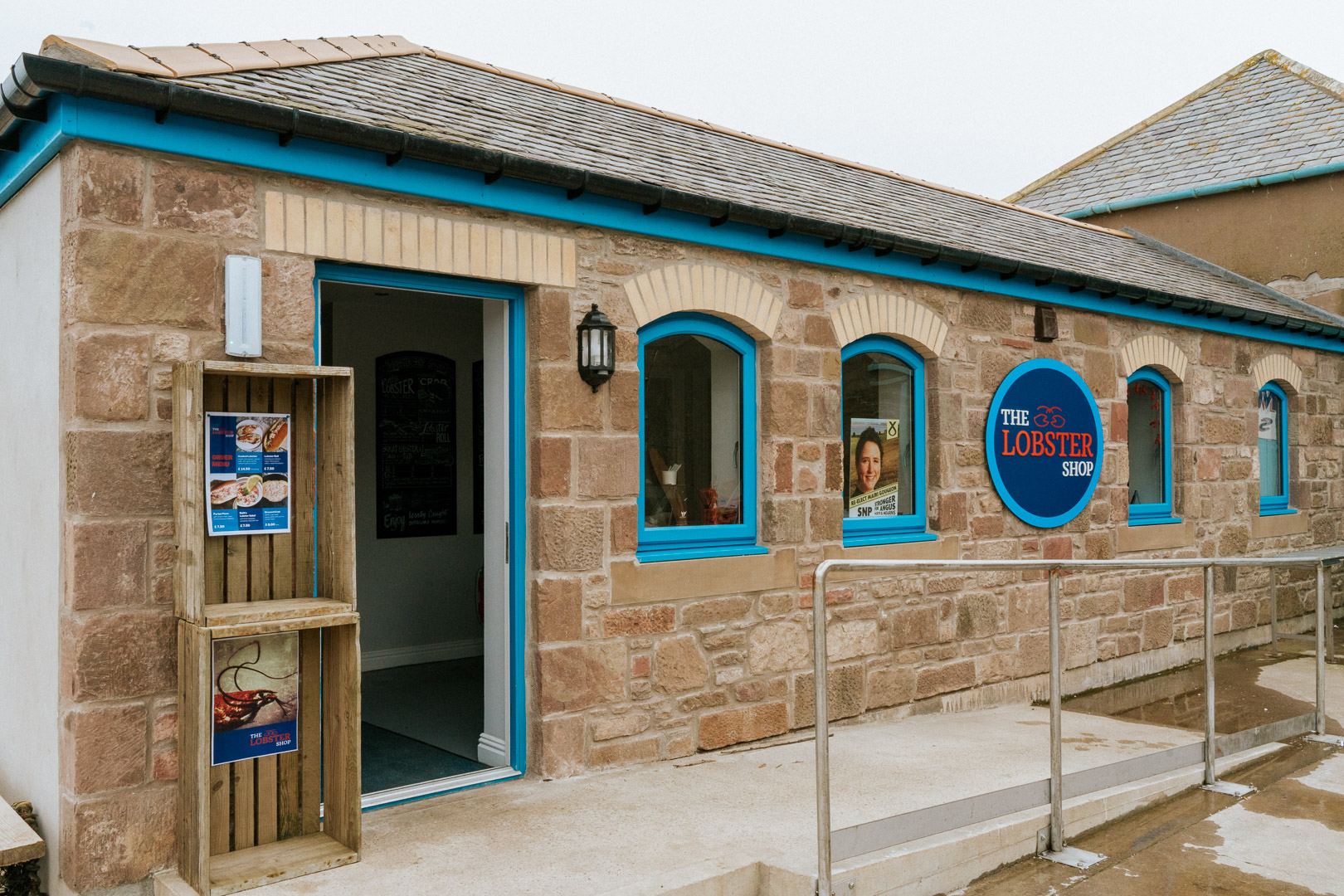 The Lobster Shop can be found just along from the Johnshaven harbour, still on the waterfront and it will definitely pull in a crowd once more people get wind of the incredible food on offer.

Whether that’s fresh and locally caught seafood to take home and cook yourself, or some delicious seafood to enjoy whilst taking in the views of Johnshaven beach as we did, it is a must-visit!

We ordered the fresh lobster rolls, which I have to say, were even better than I had hoped.

Filled with saucy lobster pieces, with the added crunch of celery. It was a little messy to eat (could just be us), but we took the opportunity to sit by the water and devour our rolls and safe to say, I have not stopped raving about them since.

I was initially a little disappointed when it came to ordering, as they were out of the fresh crab rolls (but this just goes to show how well received they are!) and I am much more of a partan/crab meat fan. Once we received the lobster roll, I was so impressed and honestly, I think that I would now have to second guess which to order next time!

It was £7 for the lobster roll which was filled with a high-quality product. It was really delicious and was well worth the money in my opinion.

If the roll isn’t your thing, I believe that there were dressed crab and lobster salad options available at a slightly lesser cost.

As always, after eating, I find myself looking for something on the sugary side. I am a cake fiend and upon finishing the lobster rolls, I was quickly seeking a tasty sweet treat to top it all off.

That wasn’t hard to find as I could see a queue outside of the Hidden Treasures Cafe just across the road from The Lobster Shop. Queues tend to be a good sign from my experience, and so I decided to follow suit and make a visit.

Consider this an alternative to visiting The Lobster shop for a light lunch if you are less of a seafood fan, as you can pick up soup and sandwiches. Many people were buying ice creams for the family, which looked great but I definitely had a hankering for some cake.

The Hidden Treasures Cafe had a selection of fresh bakes behind the glass on the counter. I took a lot longer to choose which I would like, a conundrum when so many look appealing, but I eventually made the decision and picked a cake that I would never normally choose, or even consider. Perhaps, following on from the lunch option that I would not normally choose, but I chose the coconut slice along with a cup of tea.

And again, it exceeded all of my expectations. I thoroughly enjoyed it, so much so, I actually didn’t share. Ok, maybe I offered a taster to ‘prove’ how nice it was (does anyone else do that?), but no more.

The Anchor Hotel Johnshaven was not open at the time that we visited but is somewhere that I am very keen to visit soon. I have heard many good things about the food served and after having a look at their website, I think this is a great option for larger meals.

Looking at the extensive menu online, there is still a heavy emphasis on fresh and locally caught seafood but you can also opt for burgers and your usual (although they sound elevated) pub-style foods. I know that this is a popular drink area and destination for locals.

Even better, and for a slight discount, you can order from The Anchor Johnshaven pub and food to take away and eat at home or again, by the water if that takes your fancy. 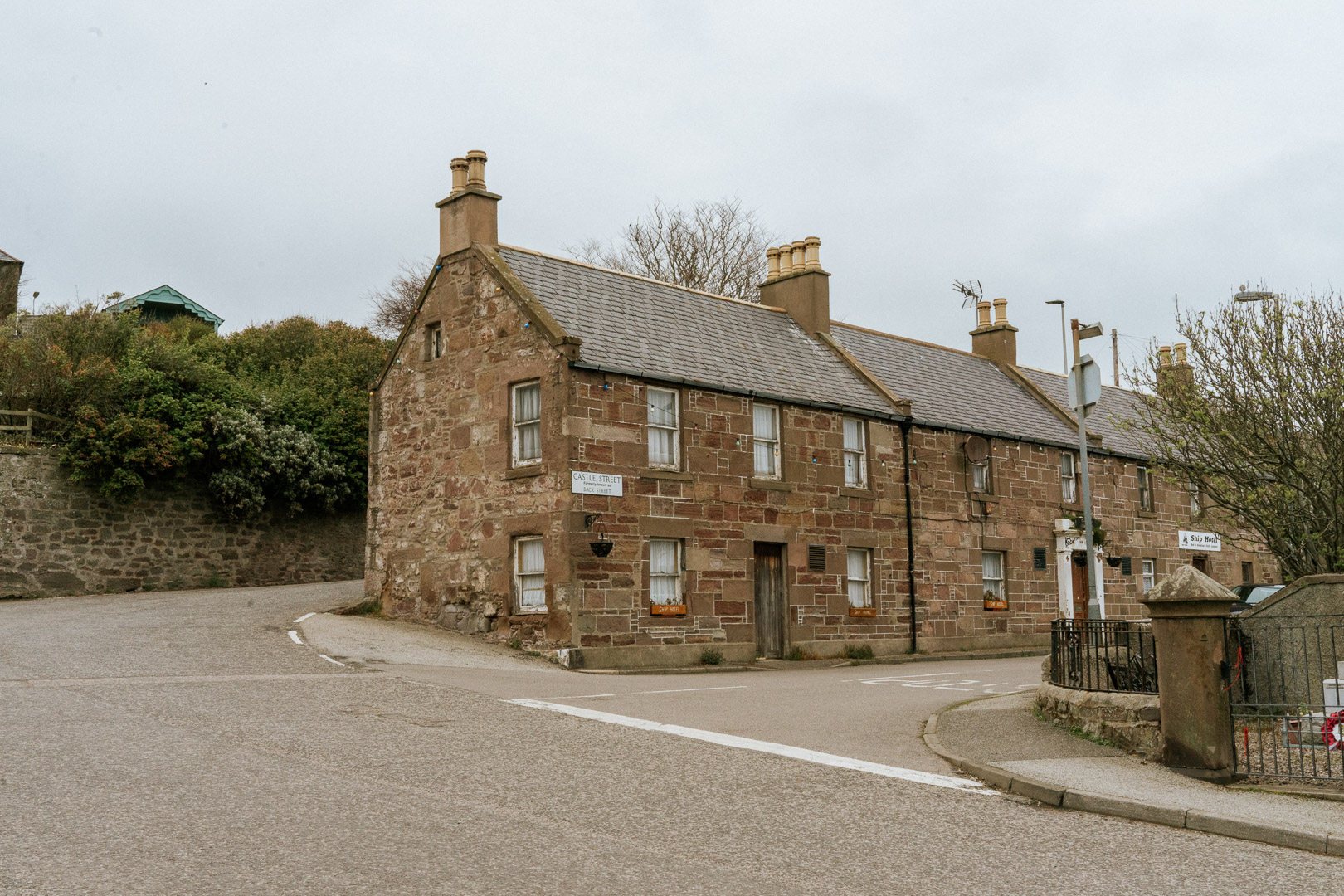 Another Johnshaven hotel is The Ship which has one of the oldest pubs in Aberdeenshire.

It may look closed from the outside, but it has a warm and welcoming atmosphere inside with music, a pool table, dartboard and more to keep you entertained.

Ideal for a quick drink or a long afternoon to while away the time.

In terms of accommodation, when visiting Johnshaven, if you are not looking to stay in a hotel, there are several self-catering options to choose from. There are also bed and breakfasts and of course, the Johnshaven caravan park.

The campsite and caravan park has a range of sporting activities such as football pitch, tennis, play park, bowling and 18 hole putting. It also benefits from showers, toilets, laundry room, food preparation area and a disabled toilet making it a great location for visiting families. 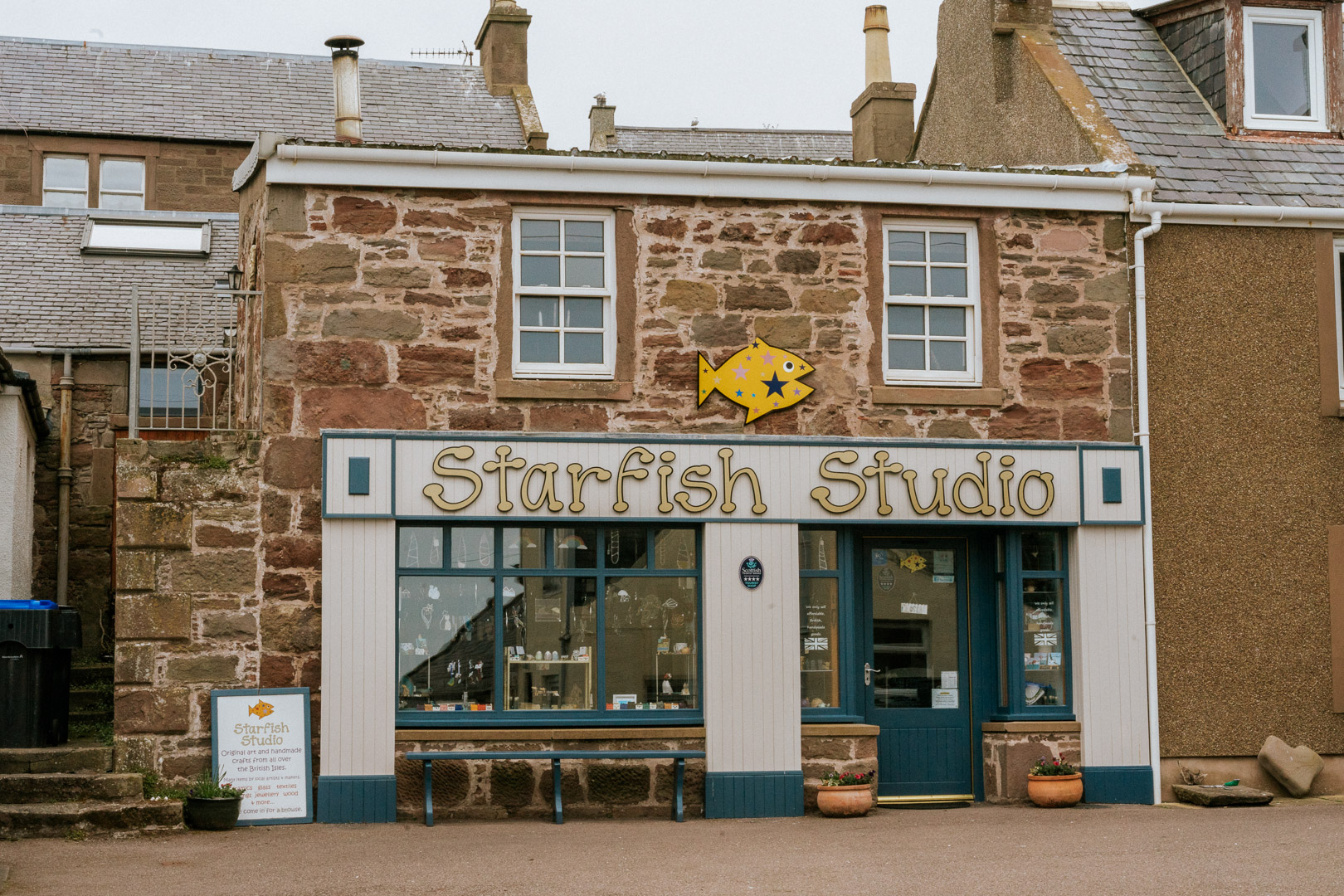 Johnshaven is a wee place and I don’t think it’s somewhere that you would visit with shopping in mind.

But in saying that, while looking for some Johnshaven shops other than the newsagents and eateries, I did spot one very lovely store: the Starfish Studio that sells many locally made arts and crafts items.

A great spot for some nice homeware trinkets or gifts.

They also hold several craft workshops over the summer months which is something to keep an eye out for!

I have passed through the village during the time of these popular events but it was far too busy to stop, so I’m sad to say that I haven’t experienced them personally but, I feel that the annual Johnshaven Fish Festival and Fireworks Display have to be mentioned nonetheless.

They are clearly notorious among locals and visitors alike and I have only heard good things, which is why I had hoped to stop by one year but parking wasn’t even a possibility!

The Fish Festival is held in the harbour area, usually within the first two weeks of August. Here, you can find stalls selling local produce, listen to live music, sample a variety of foods and enjoy the overall atmosphere before watching the annual raft race!

The Fireworks Display, on the other hand, takes place towards the end of January and is funded by collections made throughout the previous year. Weather dependant, this is a wonderful display to be enjoyed overlooking the harbour waters.

Johnshaven is a lovely village to visit (especially now that I have discovered The Lobster Shop) and is definitely worth a visit if you are in the area!