Do you know those videos that often pop up on Facebook or Instagram that shows you unadulterated images of hot, melted cheese which make your mouth salivate and provides its own unique source of pleasure?

Well, that is the only way I know how to describe Melt, the first grilled cheese restaurant Aberdeen had the joy of experiencing.

Melt owner, Mechelle Clark originally opened the Aberdeen cheese shop on Holburn Street in 2016 after being made redundant from her Oil & Gas job during the infamous oil downturn. If you are local to the city, you will know what a terrible and devastating impact this had on a lot of people working in the industry but it turned out to be a fantastic opportunity for Mechelle to take a chance on something different and create a job of her own.

The Holburn Street shop and original Melt Aberdeen menu primarily focused on takeaway soups and a selection of the grilled cheese toasties for which they are now so well known, along with its eclectic decor of many mid-century and 70s influences.

Holburn Street is a great location as it is near many business’ and schools so I’m sure that this footfall was great for many reasons and allowed the business to grow and quickly outgrow this shop. I feel the Melt Aberdeen Belmont Street location was the perfect move for them to progress and open the Melt 2 cheese restaurant.

The premises of Melt 2 (for which it became known during the transitional period) is a great upstairs/downstairs location which has been home to many cafes and takeaways previously. Downstairs there is a separate and designated area for those ordering takeaways alone and upstairs is where you will find the Melt 2 Aberdeen restaurant. 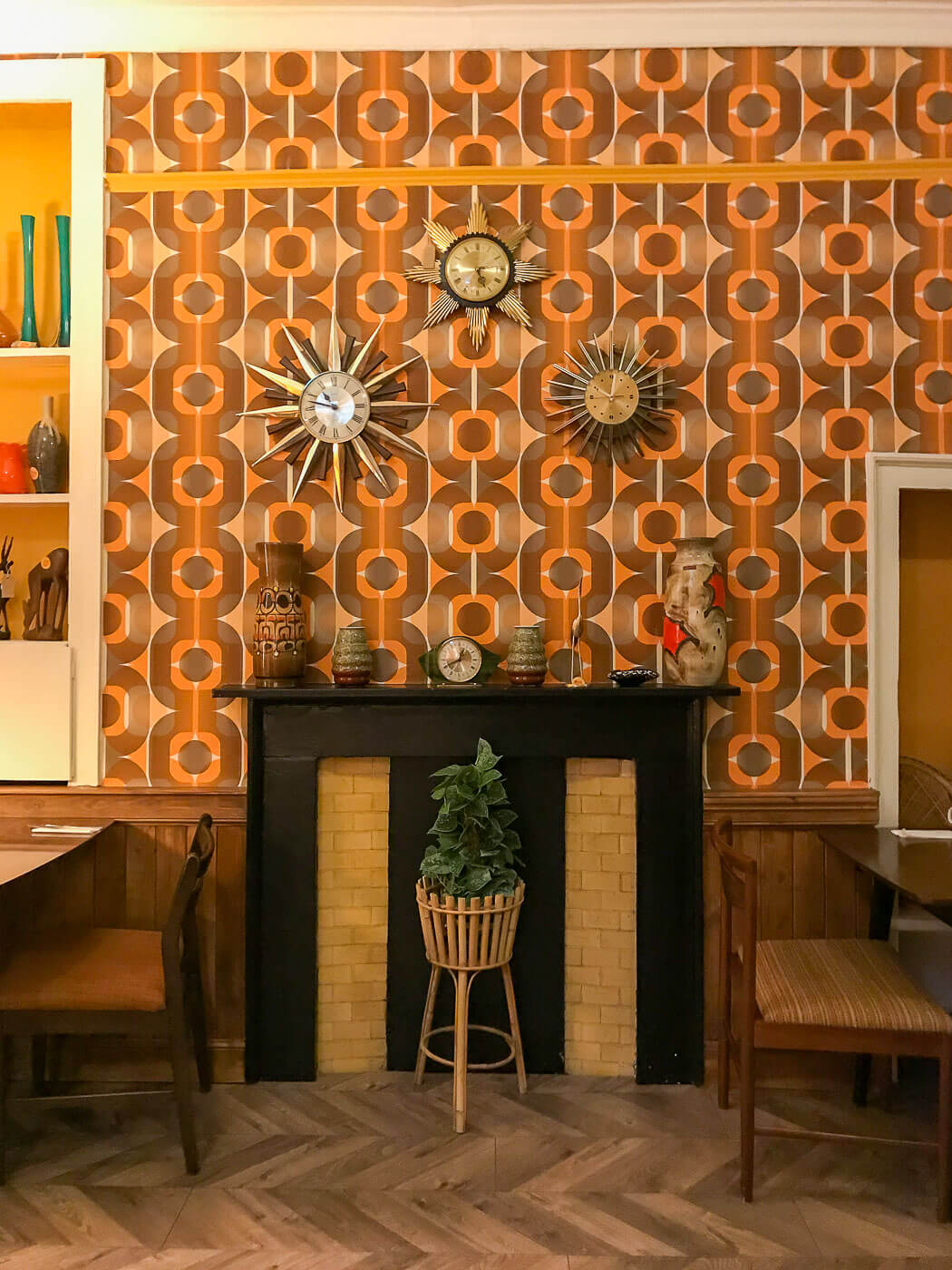 I was so pleased, and I did not doubt that they would but I was happy to see that they took the incredible decor to the new building. I am such a lover of mid-century styling and it’s something that I try to incorporate into my own home as much as possible.

Safe to say, my home is not on the same level but I have a huge amount of appreciation for it as I know many other people do. It feels as though you are taking a step back in time and if you are of a certain age, as with me, I’m sure it will evoke memories of visiting some older relatives house whose style never seemed to move with the times.

Perhaps there is a sense of irony there, as that is very much me now.

Upstairs, you really experience the Melt restaurants full aesthetic. And I adore it. Another thing to look out for is the price tags on many of the items as they have collaborated with a local vintage store, so you could walk away with more than a full stomach on your visit!

I was excited to visit the restaurant after such a long time of meaning to. We went along on a Wednesday evening and I thought that it had a really nice atmosphere. It was not exceptionally quiet, which often gives me anxiety but there were a couple of larger groups along with some pairs seated as we arrived. 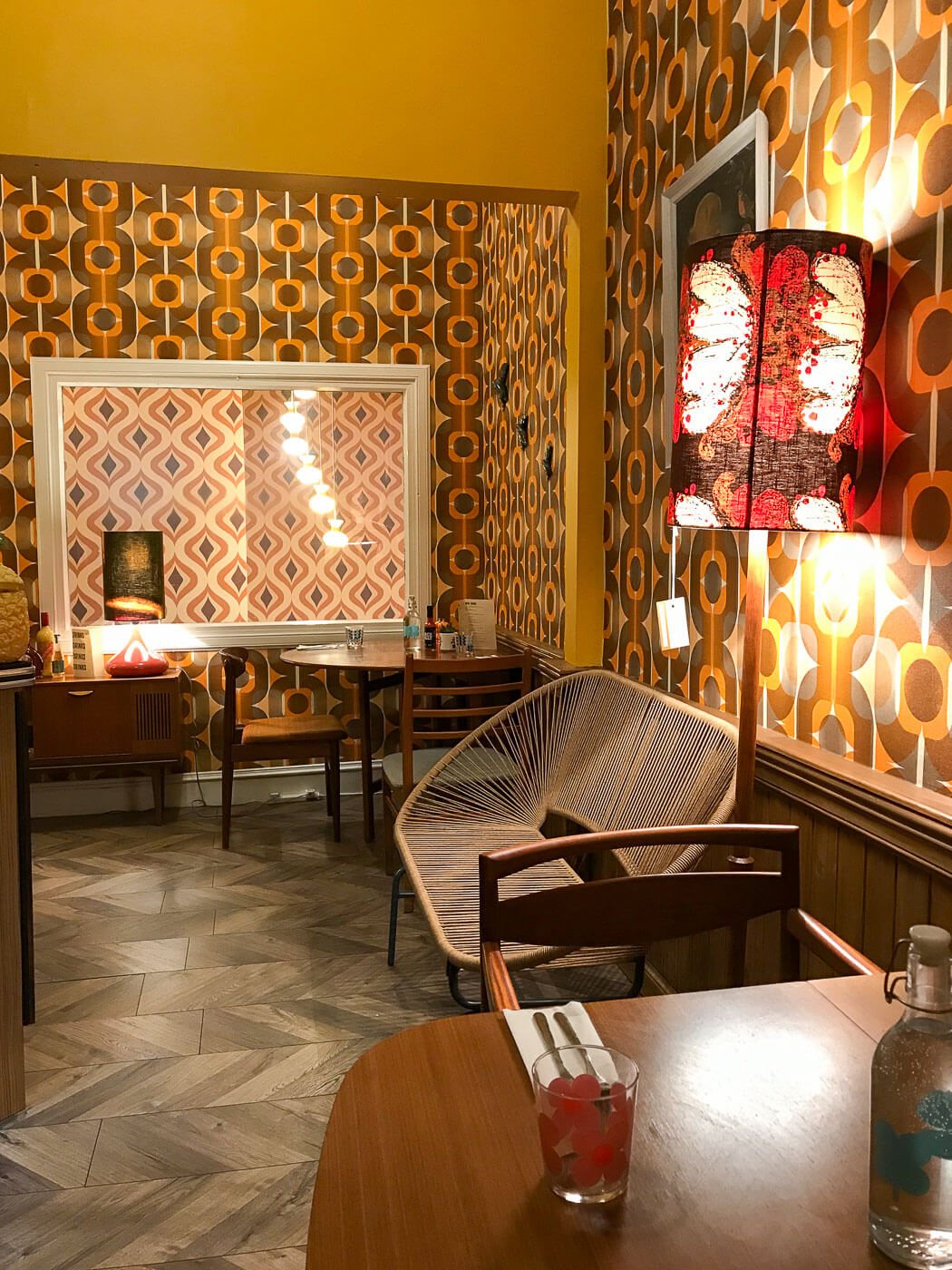 We were seated in the corner by the fireplace and provided with some menus. I am one of these people that looks at the menu online before visiting so I already had an idea of what food was on offer and what I would be looking to order.

I found the staff to be friendly and we were left for a little while before having our order taken but not for such a long time that we felt forgotten in the corner. It was nice to look at the whole menu together and comfortably fall into the beginnings of a conversation without feeling rushed.

As you can imagine and probably as you would hope, there is a lot of cheese on the restaurants Melt 2 menu! We opted for starters or, smaller plates as they are listed on the menu and then mains but as much as I love it, cheese is incredibly filling so, unfortunately, we could not stomach any more food by the time it came to dessert. That pains me because desserts are my thing but it’s just an excuse to go back!

From the menu, we ordered ginger beers to drink, I love ginger beer but in my head, I’m not sure if it was partly to do with the decor but I was having a Famous Five moment so there was no alternative and if tinned peaches had been on offer…

Anyway, I digress! To start we ordered the Sweet Halloumi Stacks and the Cam & Bert.

I am not a huge fan of halloumi so I only ate a little bit of this but it was delicious, I just couldn’t ever eat a substantial amount of it. I love that it comes served with a yoghurt dressing and some pomegranate seeds. Pomegranate is something that I think is underrated but goes brilliantly with cheeses and salads, especially feta so I enjoyed this way of serving. 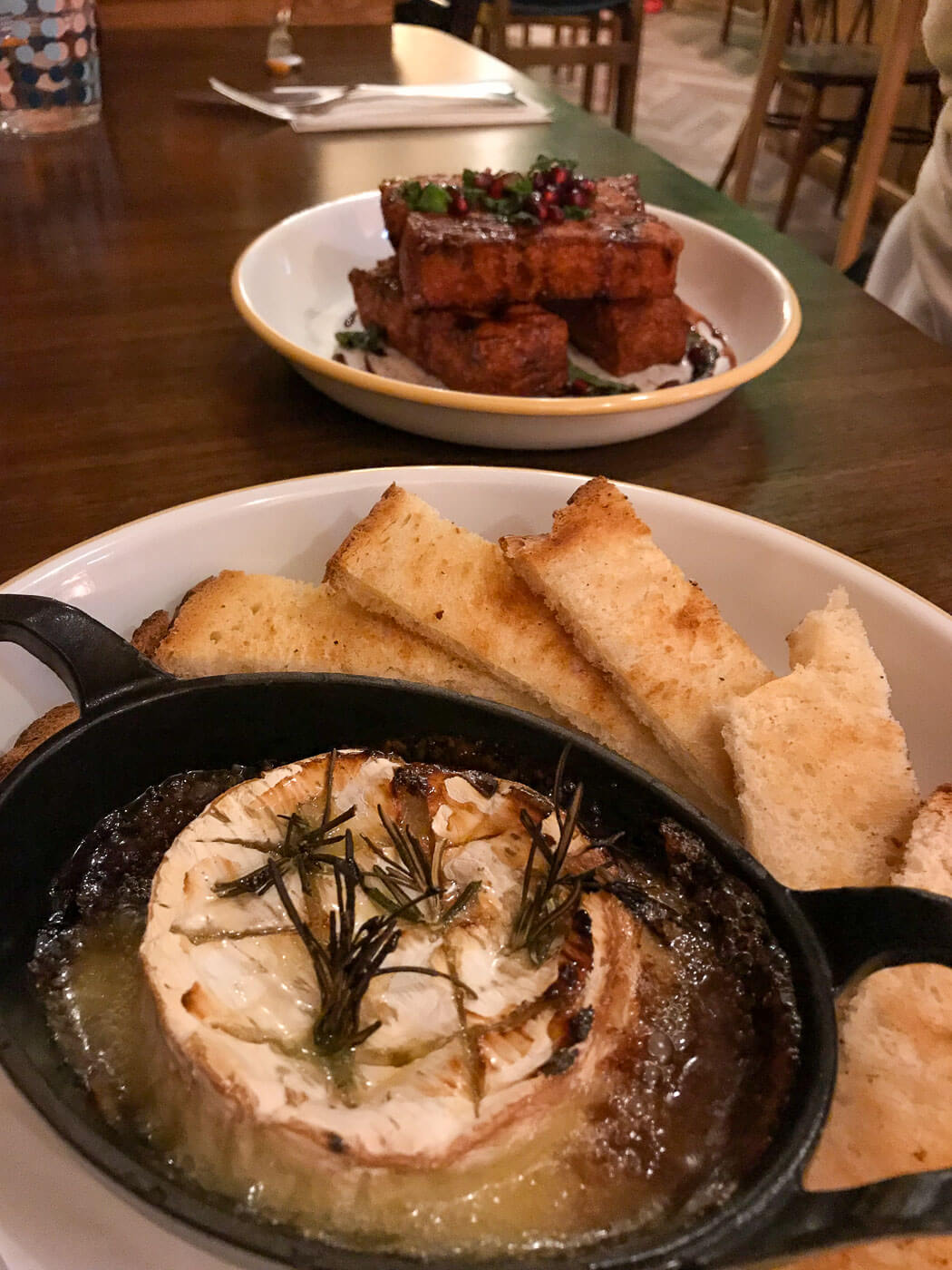 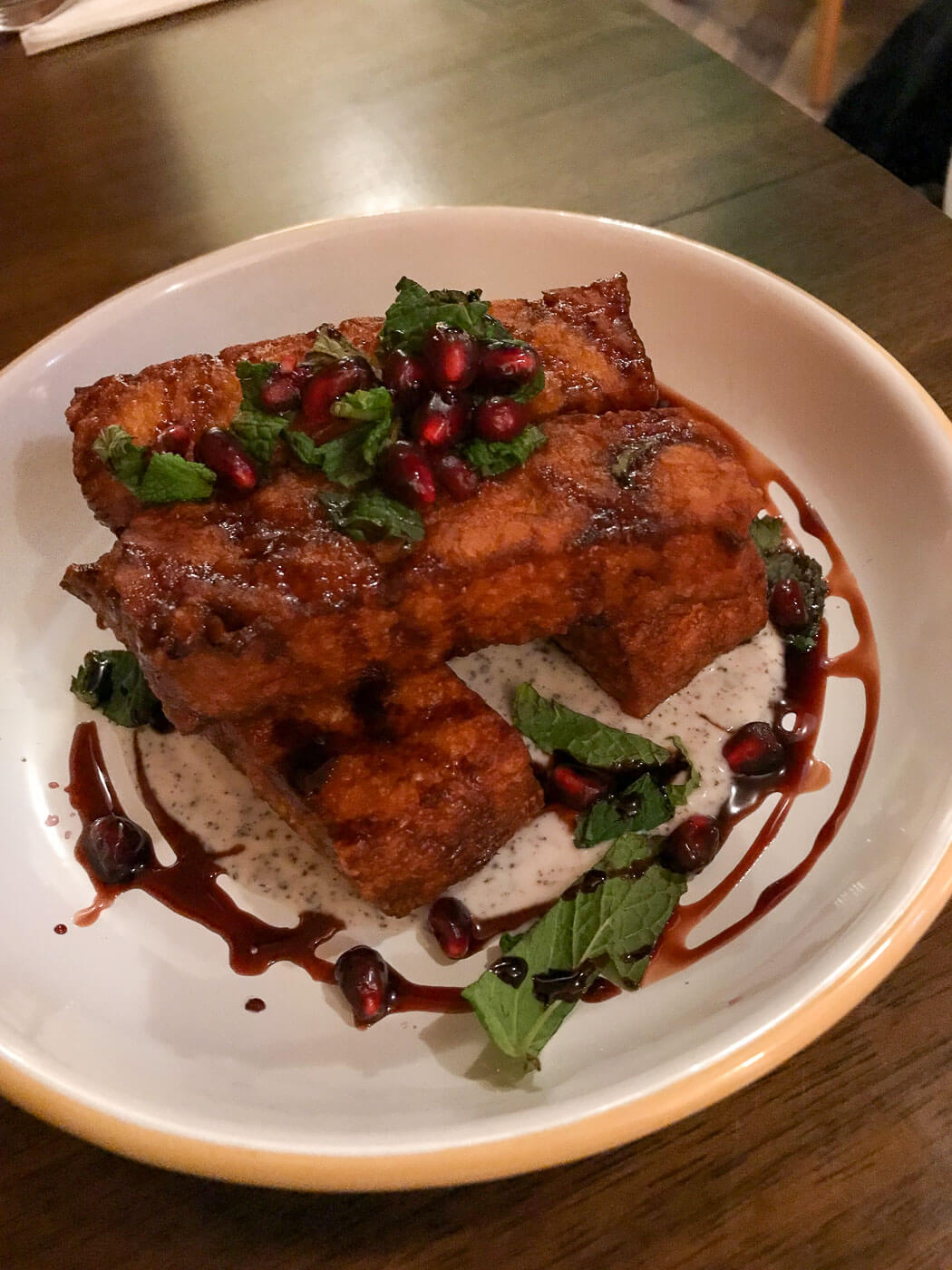 The camembert was served with toasted bread and a drizzle of honey. I love camembert cheese, I think it’s a great sharing dish and generally considered quite a safe crowd-pleaser but it’s rich, smooth and buttery taste can be a little too much for some people. I found it delicious though, I could have done with a little bit more honey but that is just personal preference. This is a great starter option.

The other smaller dish that tempted me was the Mac and Black. This is mac and cheese topped with a panko crumb and Stornoway black pudding. I’m from Stornoway, I have mentioned it in many posts before and the mention of Stornoway black pudding anywhere on a menu ignites something in me and I am always tempted to order out of some sort of pride and sense of loyalty or affinity. I didn’t this time, but I will be back to try this as it sounds delightful. 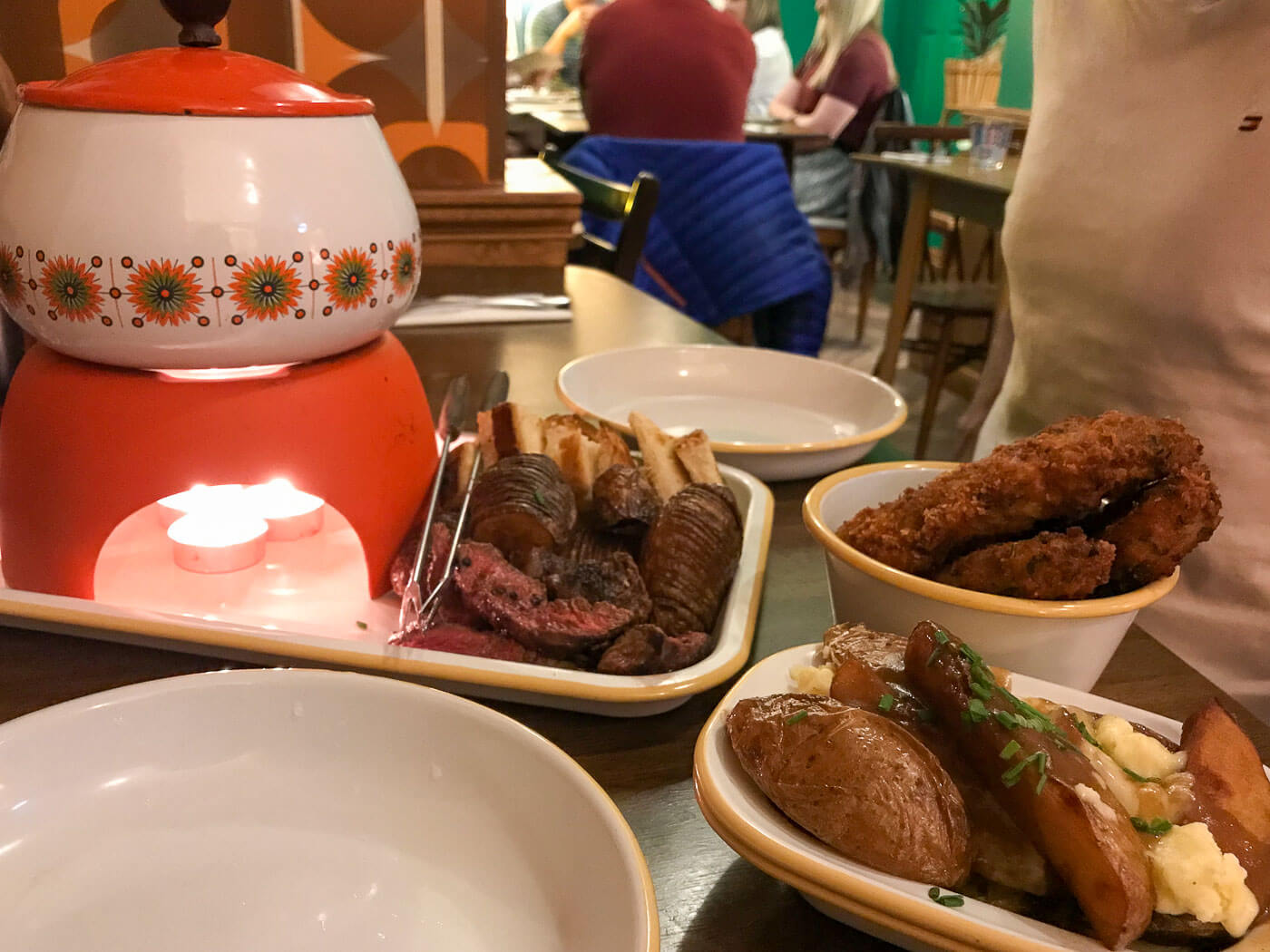 For the main, we ordered the Fonduel which is essentially a sharing fondue for two people with a selection of foods for dipping. Out of everything on the Melt 2 Aberdeen menu, the Fonduel was always going to be my first choice as it was a little bit more fun, engaging, not something I have at home and I love picking at different foods.

If fondue is not your thing then there are the options of burgers and Steak Frites which may be more to your liking. Vegan and vegetarian options are also available.

With the Fonduel, which is an Emmental and Gruyere with white wine mix, you are given toasted bread, flat-iron steak (which you can swap this for vegetarian sausage), pickles and Hasselback potatoes. We also chose to order mini poutine and frickles (fried pickles) on the side. We were a little unsure about how much food we would receive with the Fonduel so we decided that more was better than not enough.

When the main arrived it was served in a lovely vintage 70s set and I was pleasantly surprised at the amount of each option that came with it but I would say when eating with a man that I think the extra sides were required.
I found the steak to be a little bit chewy and maybe that was just the cut that we received but the rest of the food was incredible and the taste of the cheese mix was perfect. I really, really enjoyed it a lot! My only downside is that if you are talking and eating and treating it very much as a social situation and not simply a chow down, the cheese does feel quite overwhelming to eat once it begins to cool down and thicken.

Needless to say, the food was delicious and I really enjoyed the frickles which I wasn’t sure would be to my taste. It’s nice to try something new and a little bit different sometimes.

I have looked at the dessert menu, of course, and I am very tempted by the sound of the Sticky Toffee Brownie Pudding which is treacle & Nutella brownie with thick caramel sauce served with Mascarpone ice cream. It sounds heavy but I think that I would love to visit the Melt restaurant again for perhaps a small plate and then dessert and coffee. In saying that, I am also very intrigued by the breakfast menu and would love to try the banana bread. 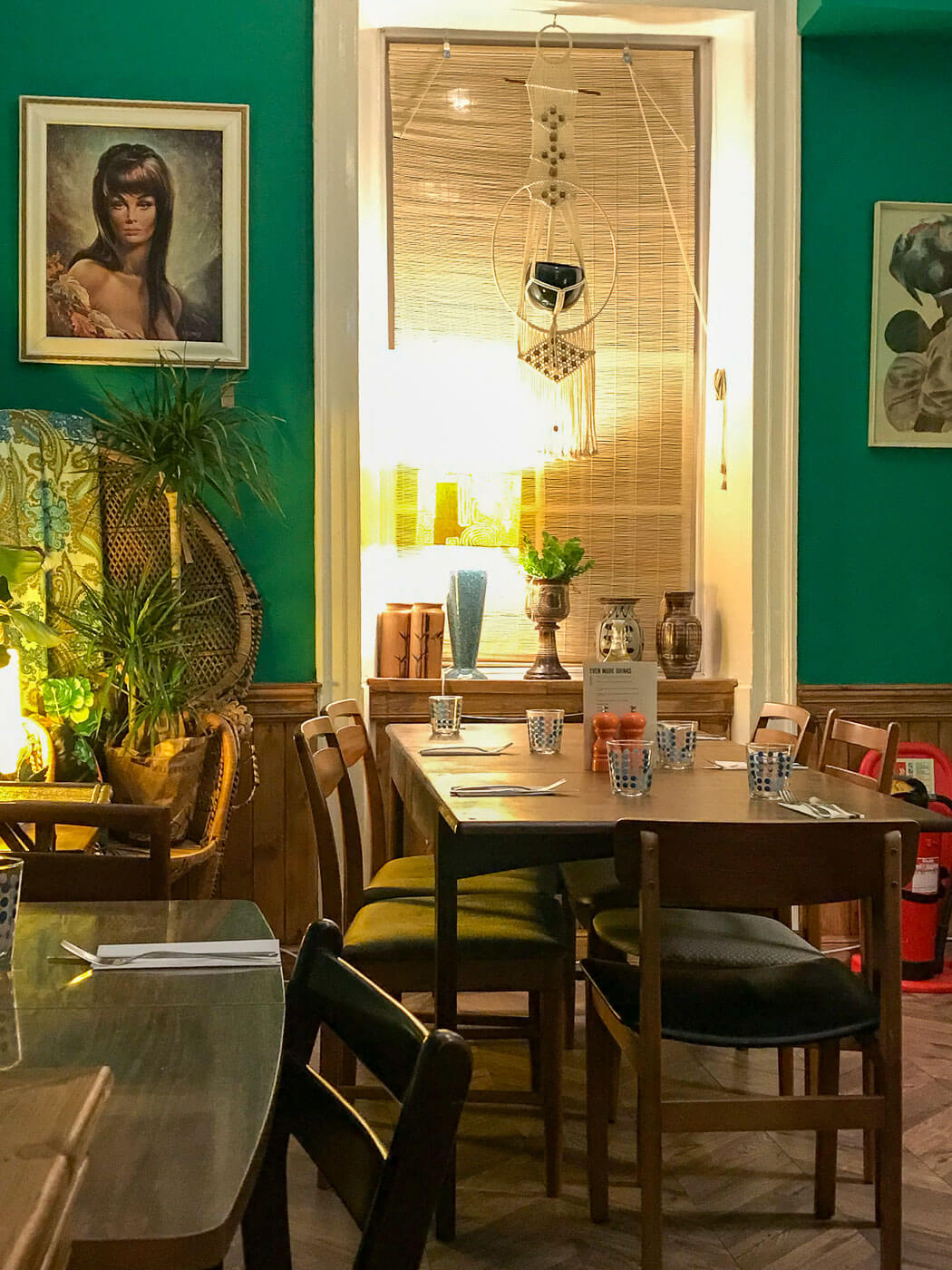 Melt is a cheese restaurant making it unsuitable for many but there is a FULL vegan menu alternative. We are so used to seeing one or two of the same vegan or vegetarian options which are thrown in to accommodate those on plant-based diets but this menu looks fantastic. It is essentially the same menu but with no meat but instead using meat and cheese substitutes.

I would highly recommend visiting the Melt Aberdeen restaurant for any occasion (or ordering on Deliveroo Aberdeen if you don’t fancy heading out), I think it would be great for a date, meeting friends or a celebratory meal. I found it to be reasonably priced with small plates being priced around £8, the Fonduel at £20 and sides for an extra £4/5 each.

If you have been, let me know any food recommendations that you have!