The North East of Scotland is lucky to be surrounded by so many infamous castles, one of those being the ruins of New Slains Castle, found on the coast of Cruden Bay in Aberdeenshire.

I’m going to offer a quick run-through of the history which will hopefully provide a little insight as to Slains Castle before ruin, as we see it today.

It remained within the Erroll family for many generations and if you look at the Slains Castle old pictures online, you will see that over time (and many reconstructions) it was transformed into a 19th century Scots Baronial Mansion with extensive gardens, and it was quite spectacular.

Although, it’s hard to believe when looking at today’s ruins, that this is the same structure.

And if you wonder why it is referred to as New Slains Castle and not just Slains Castle.. well, you can also visit the ruins of Old Slains Castle, which lie not too far from nearby Collieston.

Old Slains Castle was a 14th-century tower house but is now little more than one section of wall. It was destroyed by James IV after the Earl of Erroll backed a plot against him and rather than rebuilding the castle, the Earl of Erroll chose to replace it around 6 miles from Collieston, in Cruden Bay.

It’s these days as a Baronial Mansion that put it on the map. It was a time where many guests and celebrities would visit the area, the most notable of these being the author Bram Stoker who, of course, wrote the Gothic novel, Dracula.

Bram Stoker visited the area of Cruden Bay for many years and it’s been said that Slains Castle played a big part in the inspiration and creation of Dracula. Along with the views of the windy, rocky cliffside and the stormy North Sea waters, it is almost as though Dracula appeared from the depths and shadows of his mind whilst taking in the views before him.

Sadly, the 20th Earl of Erroll gave up Slains Castle, leaving the family after 300 years and it was eventually sold to Sir John Ellerman, a shipping magnate. And in 1925, it was abandoned, the roof was removed to save on paying taxes that were introduced and it ultimately leads to the castle ruins that we see today. 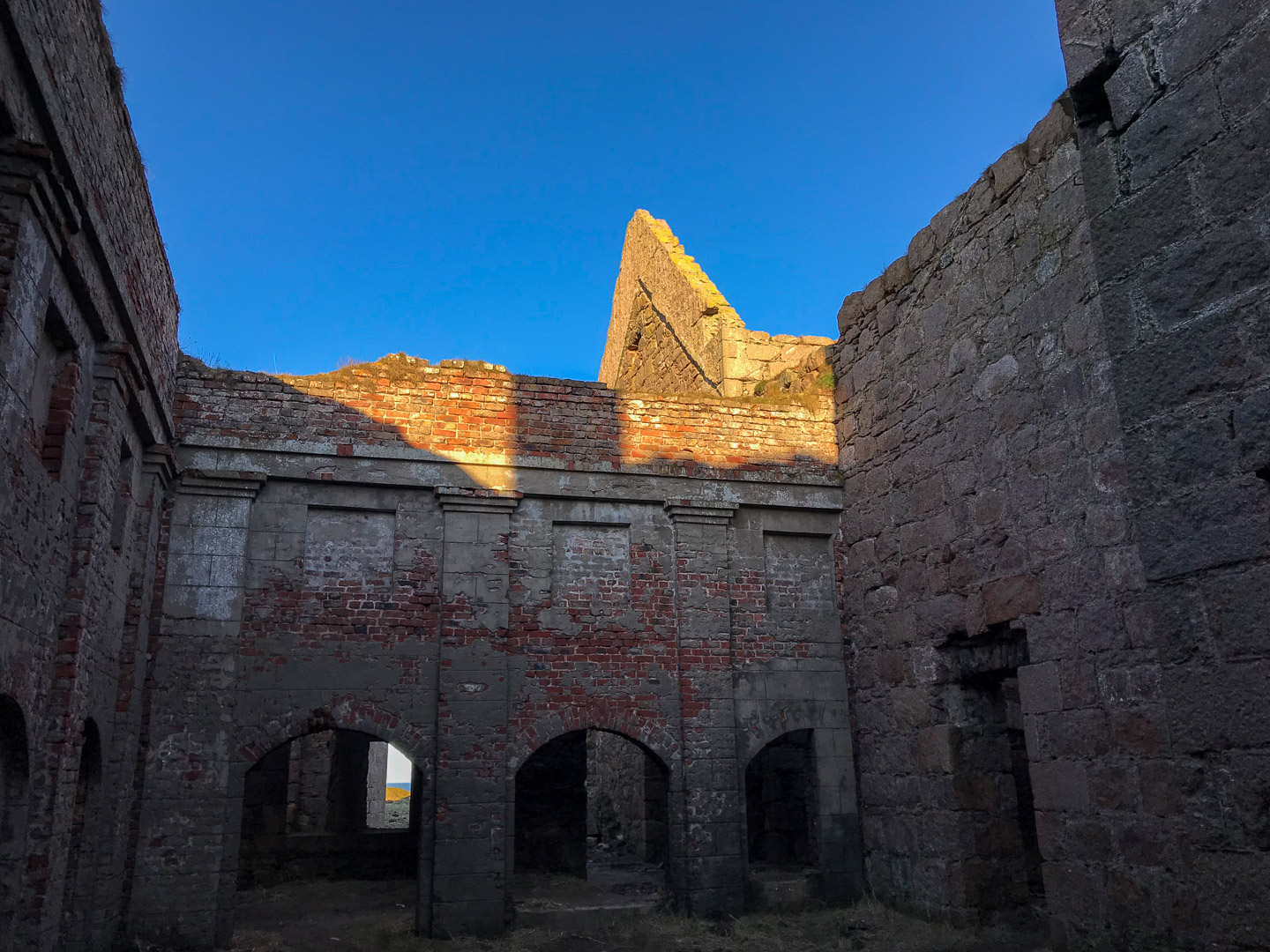 In recent years, the castle has been awarded Historic Environment Scotland listed status which will hopefully offer it some protection and care from further ruin but from my experience, it is not actively maintained.

I know that there have often been talks of turning the site into apartments or holiday homes and while I have no doubt that it would create an incredible place to live and in some respects, restore and bring back the property… I hope they don’t.

There are two camps in what people think should happen with Slains Castle. We live in an area with over 200 castles and many don’t see the significance of yet another ruin, but I also see something so haunting and unique in New Slains Castle. I don’t know. 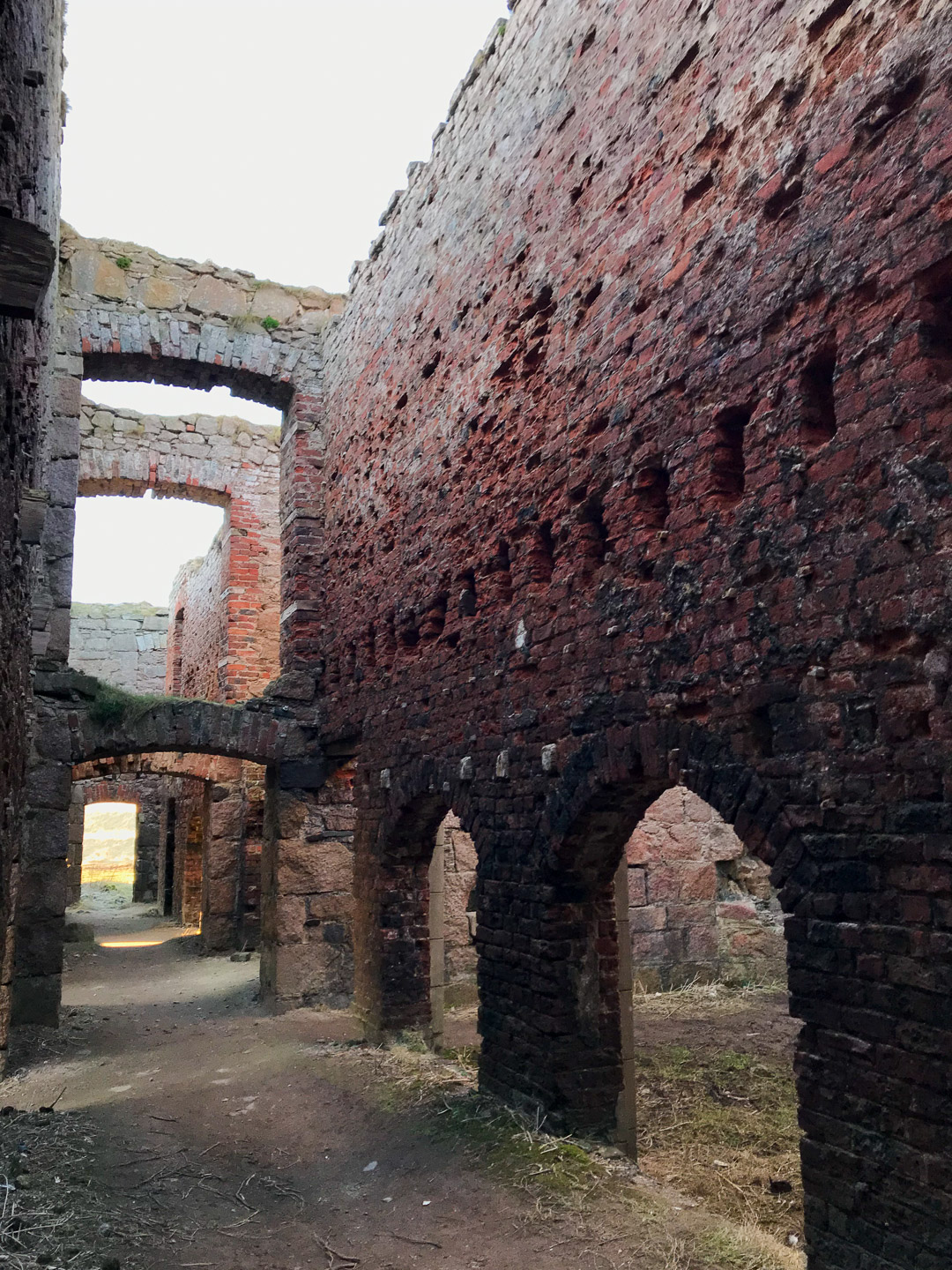 I really enjoy visiting the ruins as they are, I love wandering around the building, an empty shell to some but with imagination, you can really picture what it could have been.

The castle as it stands comprises a large number of interconnected rooms. There aren’t really many distinguishing features to note. The castle is very much desolate although I do still think it’s interesting to walk around. There are some spiral staircases but they do not lead anywhere, you can see outlines of where walls or fireplaces may have been. There is no grand entrance and there is nothing surrounding the grounds to allude to much more. 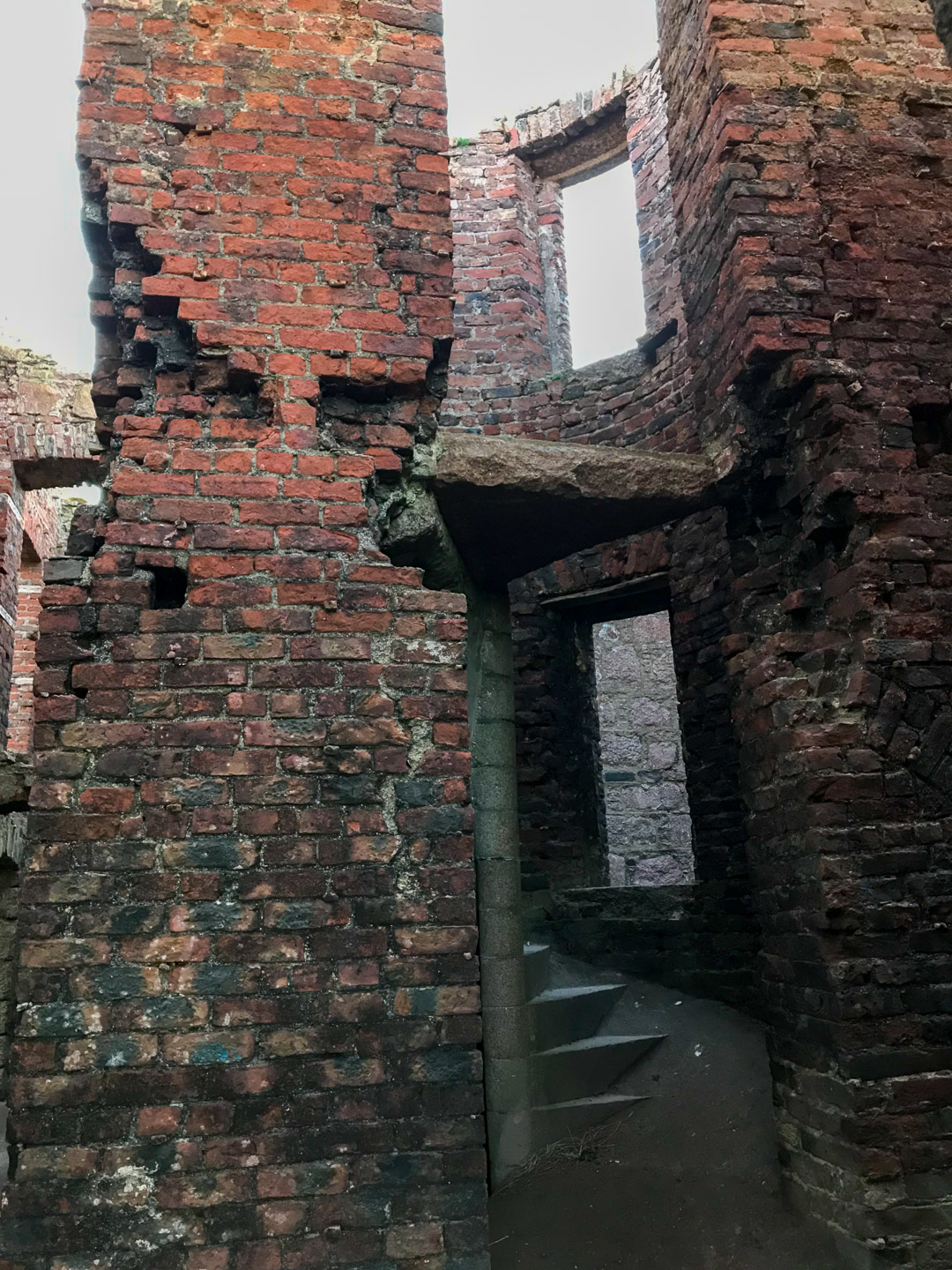 However, as you make your way around the walls, there are so many glorious large window frames that look out towards the sea. What a view it would have been from the safety of your home but these days, some of the walls really do lie on the precipice of being lost to the waters below. It is treacherous.

You are exposed to the elements, it’s very windy as you look out to sea or walk around the castle but you are sheltered within the walls. I think you could spend an hour or so just wandering. 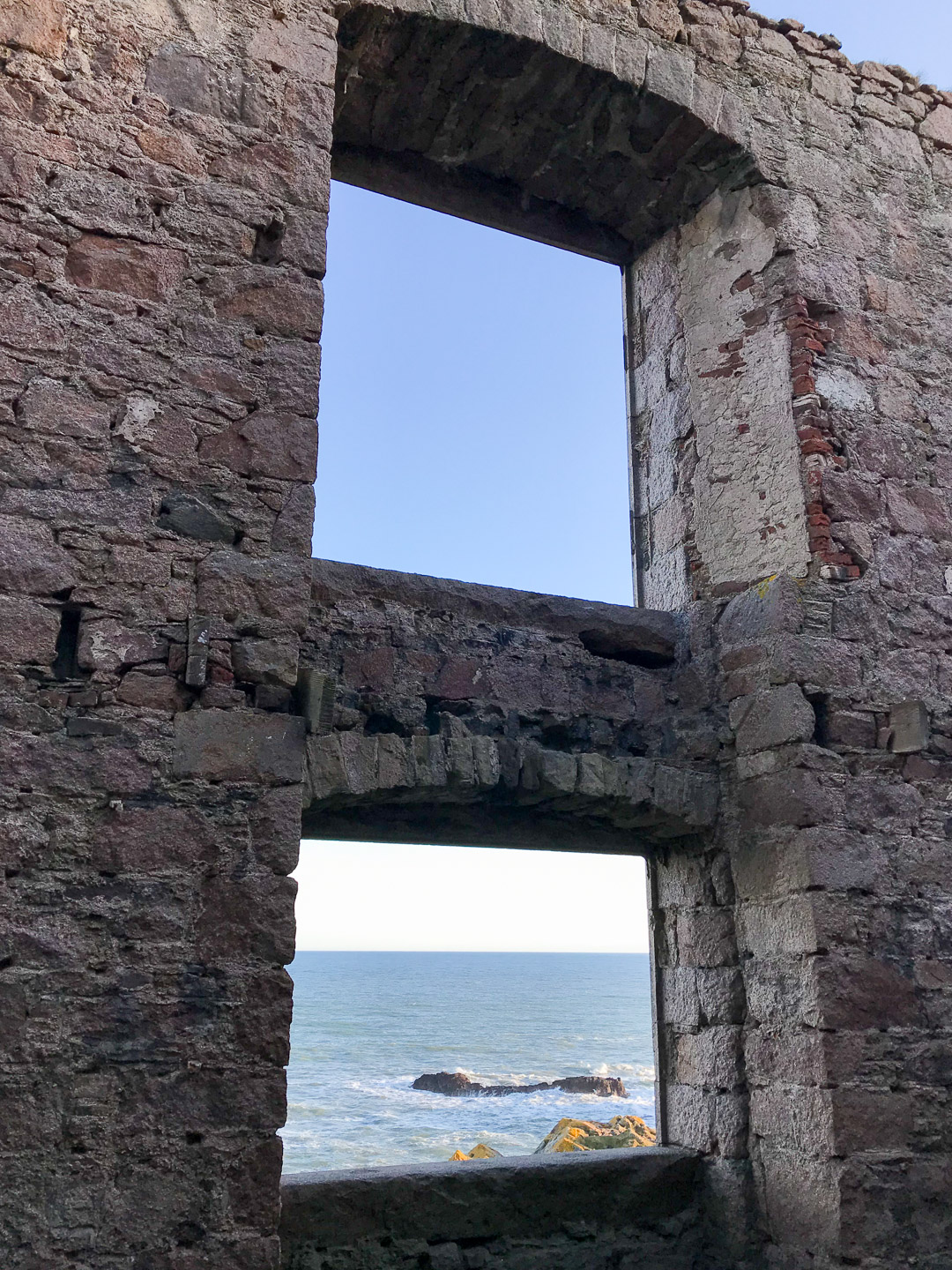 As with any old building, there are, of course, rumours of a Slains Castle Ghost. Either sightings of the 20th Earl of Erroll or sometimes it’s soldiers. The building definitely has an eery feeling about it, you may even see a murder of crows which adds to the creepy atmosphere and plays on those Gothic, haunting vibes.

I am not sure if there are any official tours of the grounds but I think you can enjoy it of your own accord.

I have no doubt that over time, some of the grounds have been lost to the water and it is definitely somewhere that you have to take extreme care of when visiting. Sadly, there have been several Slains Castle deaths, where both people and animals have tragically fallen victim to the cliffs.

There are often reports of the coastguard being called out to the area and I would just advise, even when the weather appears to be calm, it is quickly changing in these parts. 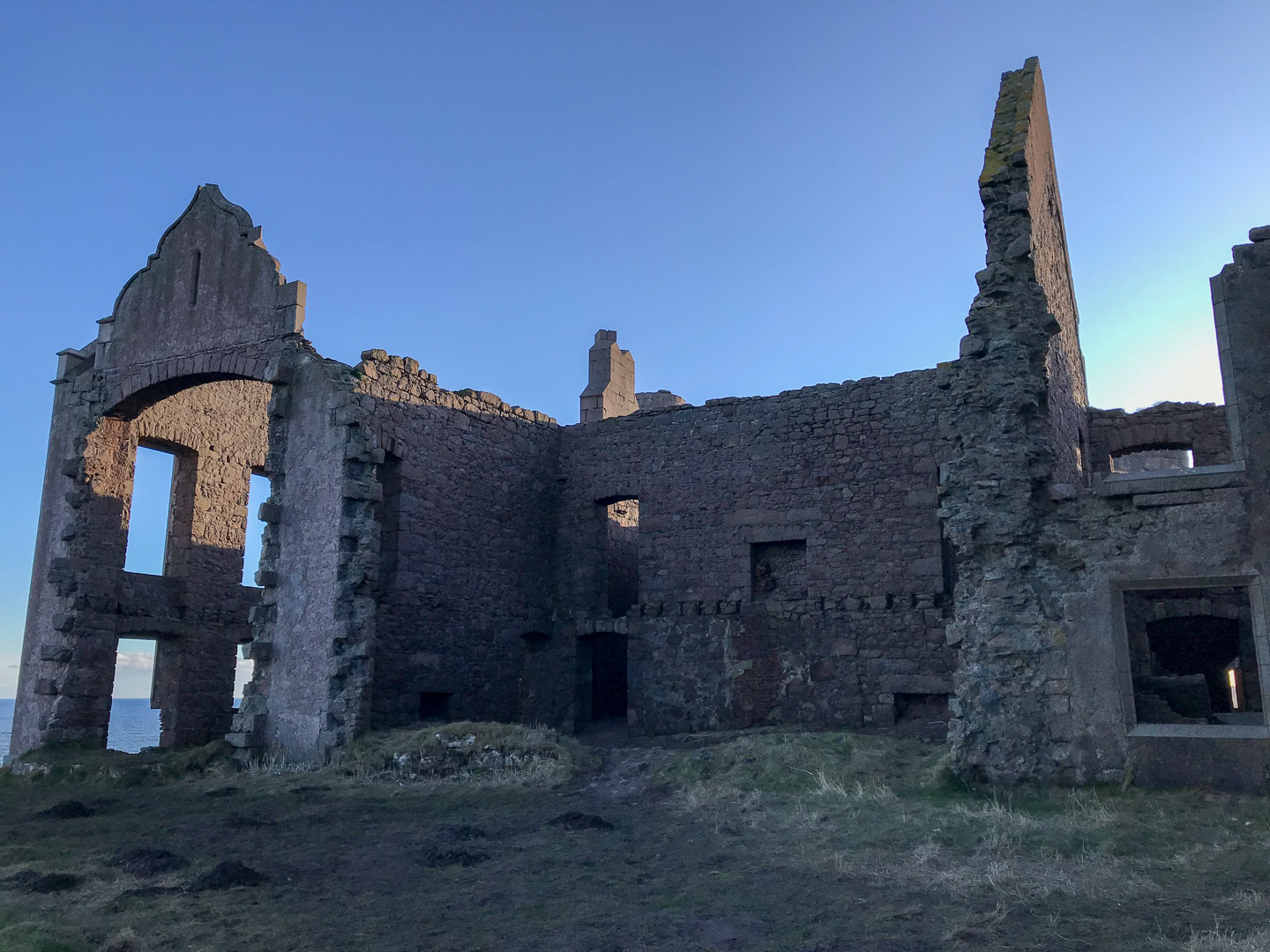 Parking at New Slains Castle isn’t clearly signposted for those that aren’t aware of the area but there is a small, free car park nearby that you can use. Otherwise, you can park near The Kilmarnock Arms Hotel in Cruden Bay and take more of a coastal walk to the castle, this should take around 15 minutes to reach.

On another note, if you are looking for somewhere to stop, or perhaps grab some food, The Kilmarnock Arms offer a wonderful menu. You can always opt for the more informal burger and chips style offerings or you can be seated for more formal meals.

It’s definitely somewhere that we always choose to stop when visiting the castle and the village of Cruden Bay.

If you’re in the area, then check out more things to do in nearby Aberdeen.