I was very lucky to have spent my birthday with an overnight stay in Dundee this year and in a fashion that is very unlike me (as I can admittedly, be a little neurotic), I like to forgo all planning on my birthday and simply enjoy the company I am in and try to submit myself to the unknown for just one day.

And as they say, breakfast is the most important meal of the day. It sets you up for what’s to come and to be honest, I think people are right as this is the meal that I look forward to most and of all the food and coffee breaks you might have during a trip away, this is the one that I want to get right.

Always keen to try somewhere new, when the suggestion was made to try The Bach breakfast (pronounced batch), I instantly agreed. I quickly Googled the menu, read some reviews and got a taste for what was on offer and we went happily on our way.

What is The Bach?

The Bach is a term in New Zealand often used to describe a modest holiday home. A popular part of the countries culture which plays focus onto that beach home lifestyle where families would often return year upon year for the holidays to get away from the fuss of the normal daily routine.

Where is The Bach?

Previously located in an old flour mill, The Bach is now to be found by the McManus Gallery where all food at is scratch-made with plenty of vegan, vegetarian and gluten-free options available among the meaty dishes on the menu. The menu has a great variety of choice and as the food is scratch-made, meaning that all dishes are prepared using fresh ingredients and that all burger patties, sausages, granola, cakes and sauces are made within the restaurant and this provides them with the freedom to change the menu up now and then and try something new and taste some new flavours without taking away any of the firm customer favourites.

This is a really large building and at the time of visiting it was quite quiet and there was a lot of unused space but I’m sure that this becomes busier throughout the day. The Bach is a dog friendly restaurant which is great news for the city centre and will be very popular with dog owners looking to catch up with friends. I felt as though we were all seated by the front door which I can understand as it is closer to the bar area and easier for staff to manage but due to the size of the building, it was a little cold, although radiators were on which did help with that. The tables are close to one another but without being so close that you feel that you are encroaching on other peoples space and conversations.

Along with the Kiwi/Scottish inspired food menu, the other speciality that The Bach has to offer is the coffee. As members of the Specialty Coffee Association and also being listed in the Independent Coffee Guide for Scotland, The Bach knows a thing or two about coffee. There is an extensive coffee menu and the thing that I thoroughly appreciate about this menu is the fact that it provides a description detailing the brewing methods behind the names and what you can expect to be served.

I’m not sure if this is something that other people can relate to but I am by no means a coffee connoisseur and can find menus detailing a choice of brewing methods and coffee beans quite daunting to choose from but this menu was thoroughly informative as to what coffee methods were on offer, what they meant along with tips on how to achieve the best taste on arrival.

Breakfast at The Bach

When it came to choosing from the brunch menu, there were so many delicious options available and it took a little time deliberating what to order. Some of the choices available were eggs benedict, French toast, breakfast tacos and corn fritters. In the end, I chose the mince on toast. This may sound like an odd choice for breakfast as we normally associate mince as part of an evening meal here in Scotland but once it was in my head, there was no getting away from it. 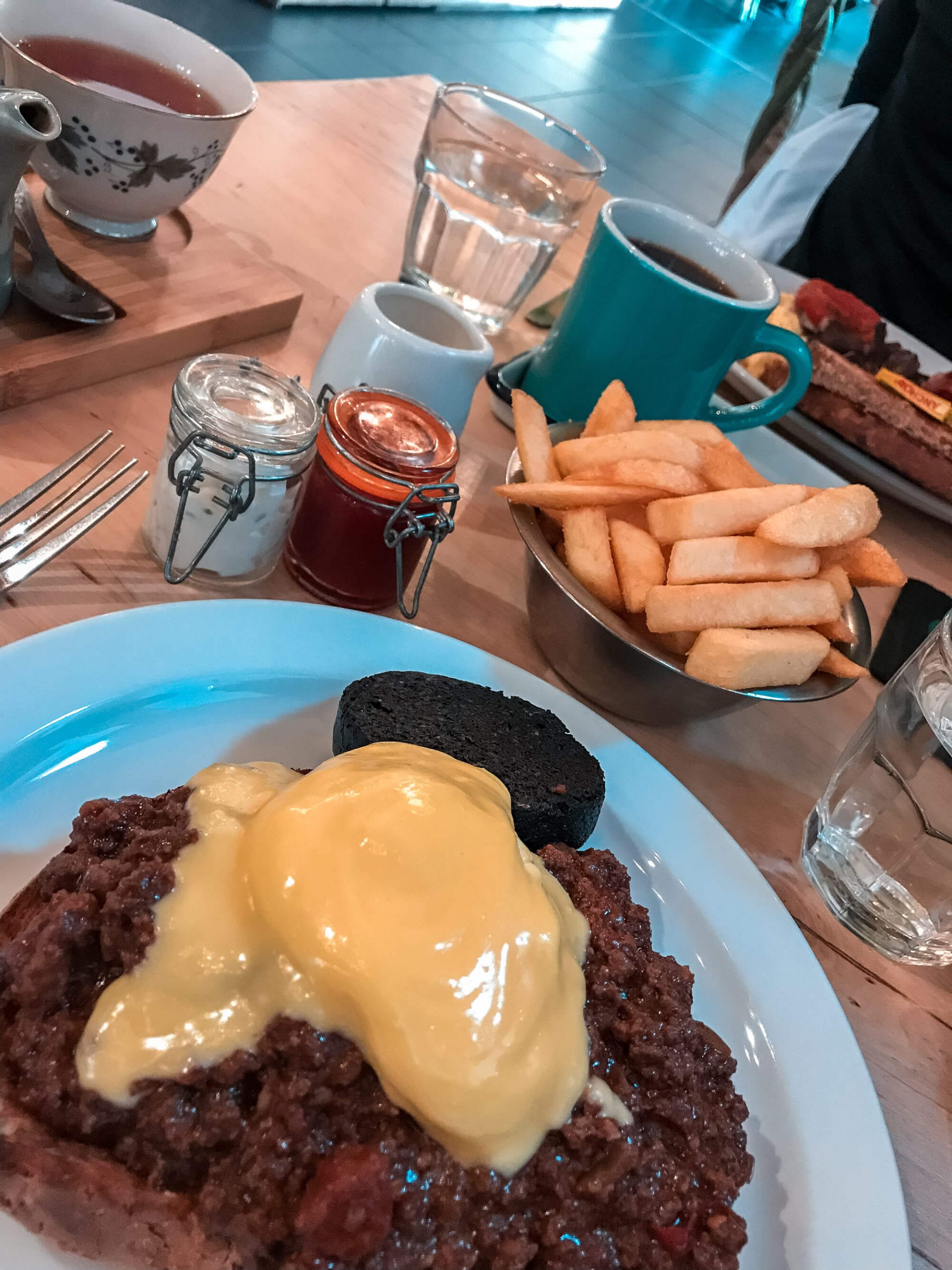 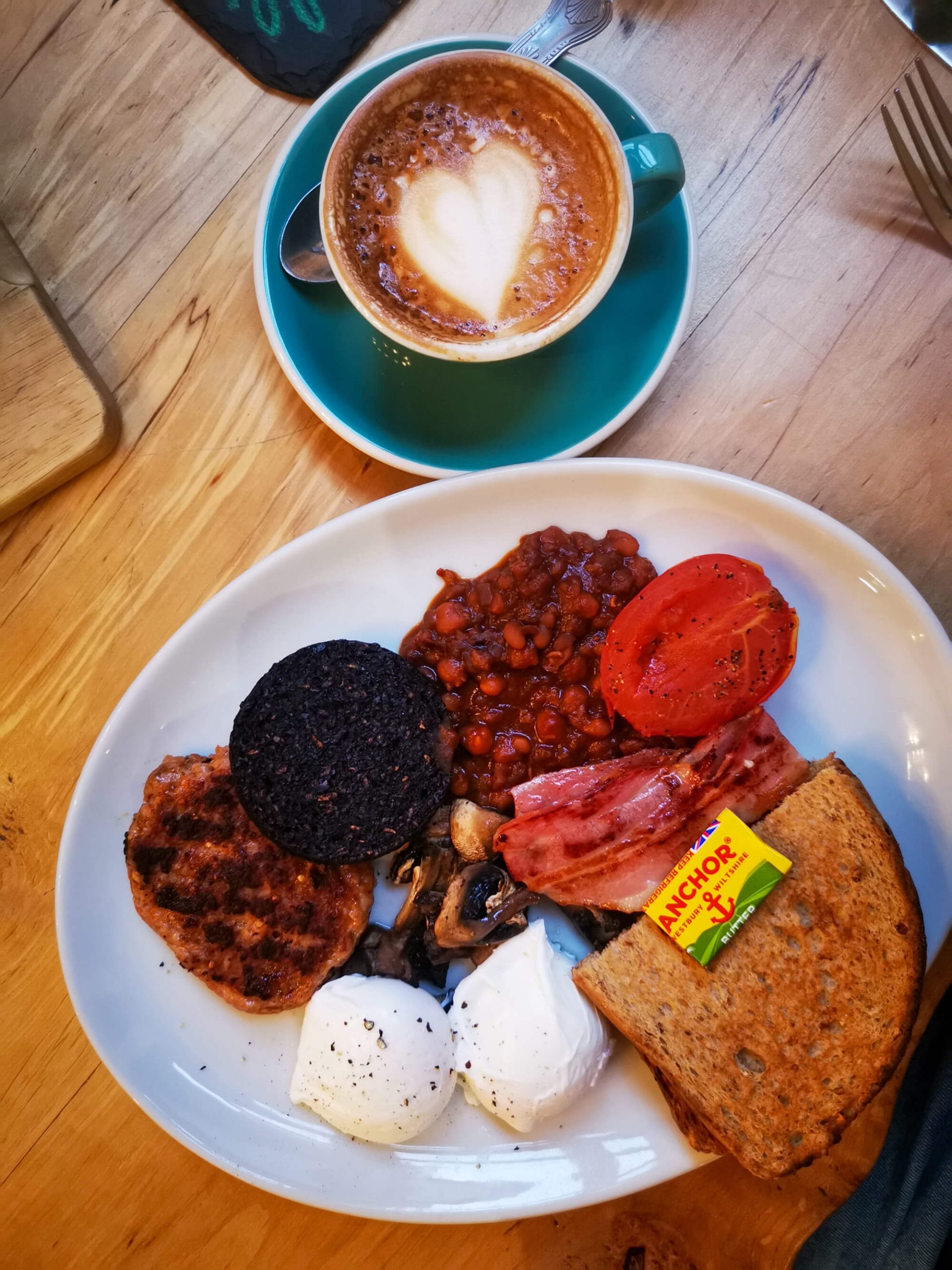 The ‘Mince On Toast’ arrived and could be considered as more of a bolognese consistency. Described on the menu as a ‘rich spicy beef mince on toast topped with a poached egg and hollandaise’, I opted for the additional side of Stornoway black pudding to accompany this and it tasted just as I had hoped. The mince had a little bit of a kick to it but it wasn’t overwhelming for an early morning breakfast choice and the poached egg had been cooked perfectly and was runny when cut open.

Peter ordered the ‘Son Of The Bach’ breakfast which is ‘bachmade sausage, smoked streaky bacon, Stornoway black pudding, bach beans, slow-roasted tomato, mushroom, two organic free-range eggs your way w/ toast & butter’. He really enjoyed the overall meal but he was not entirely convinced by the bachmade sausage which is served as a patty as opposed to the traditional link sausage. It wasn’t the shape of the sausage that he found slightly unsavoury, it was the texture that he couldn’t quite get on board with but other than that he enjoyed everything else that was on the plate.

Because it was my birthday we also indulged in a portion of chips along with two of The Bach cafes sauces which can be ordered for a small added charge. We chose the chilli jam and garlic mayo, the jam was very sweet and the mayo was very garlicky and I thoroughly enjoyed both.

I found the breakfast to be filling, the portion size was perhaps even a little too much food for me but I don’t have the largest appetite and Peter had no complaints as to the amount of food provided. The general costs of breakfast items are between £8.50-10 which I think is reasonable in comparison to other establishments but also more than justified for the quality of food that we received. The service was incredibly friendly and enthusiastic and the general atmosphere of The Bach restaurant was very laid back, along the lines of their business statement of this retreat from the hustle and bustle where you can simply relax and it felt as though the staff believed in this.

Having looked at the lunch menu I can see that many of the brunch items are offered throughout the day but with some added items such as wraps, tacos, banh mi and burgers which are in the £7-13 price bracket. If you choose to visit from noon onwards then you may also be interested to order one of the craft beers, ciders or artisan wines on the menu, however, there are also plenty of Kiwi soft drinks on the menu to try which I think would be fun to try. 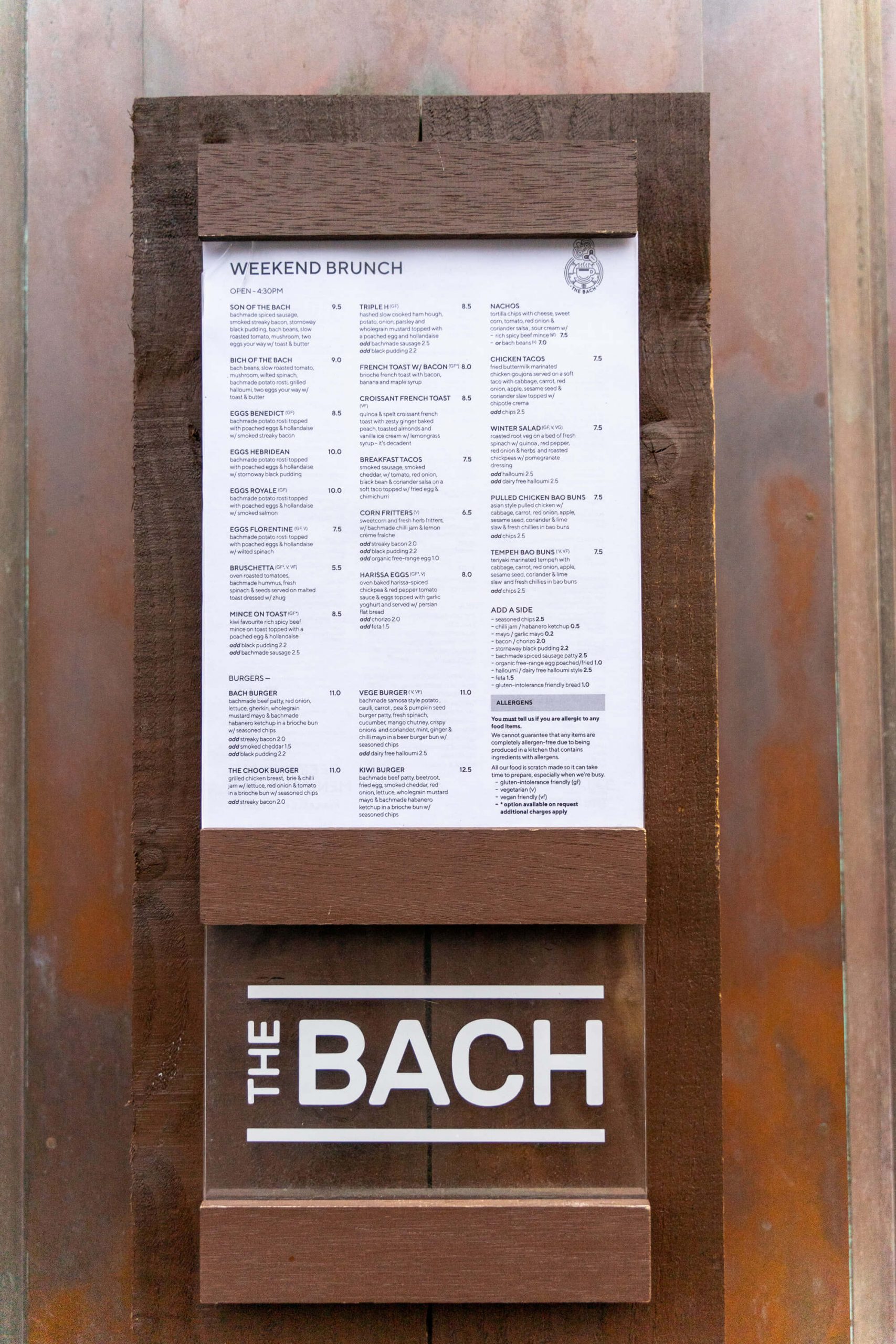 Visiting The Bach for breakfast was fantastic and I would highly recommend this as one of the best places to eat brunch in Dundee city centre that I have experienced so far and I would like to return and try more of the menu, perhaps visiting later in the day for some lunch.