Let’s start by being honest, the thought of spending a couple of hours getting lost in the depths of a subway station, particularly when in an unknown city or country has never appealed to me.

In fact, it’s a situation I can confidently say that I do my best to avoid and that I am more than willing to spend time pre-planning all the required stops and rarely deviating from the plan to ensure that, to the best of my ability, this situation does not happen. Especially while on a city break when time is so valuable and limited from the get-go!

Well, that was until I went on Pinterest searching for things to do when visiting Sweden and saw the HandLuggageOnly pictures of the Stockholm metro art.

I was aware that some metro stations around the world had been designed and become an art gallery in their own right but I had no idea that Stockholm was one of them. It turned out to be a welcome surprise to add to the itinerary and as I now know, Stockholm metro station is the worlds longest art exhibition covering 110km/70miles so it’s something I would have been so disappointed to have missed out on. 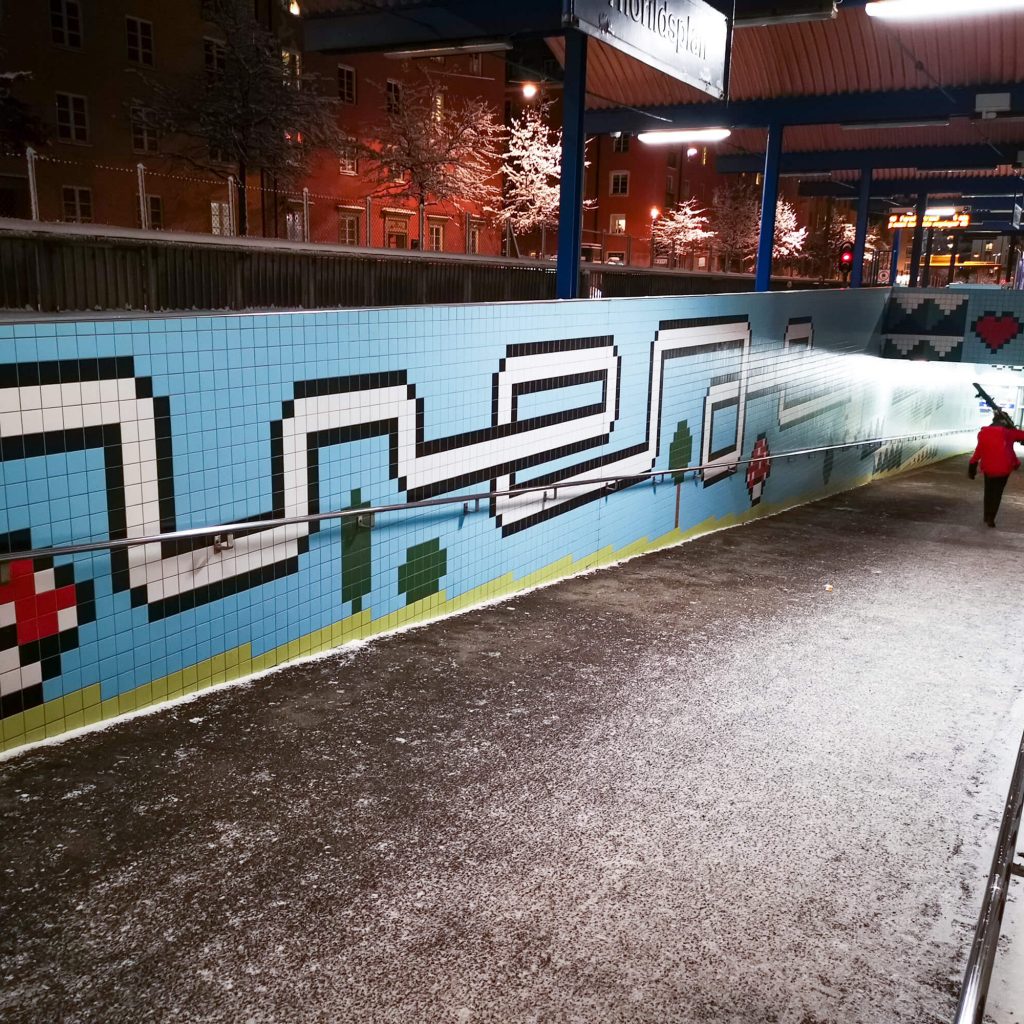 The Thorildsplan Station is one of the only stations in Stockholm made up entirely of tiles.

The artist was given free rein of design and drawing inspiration from the surrounding area which features elevated sidewalks and many crossings, the artist created a pixelated piece of artwork inspired by video games. 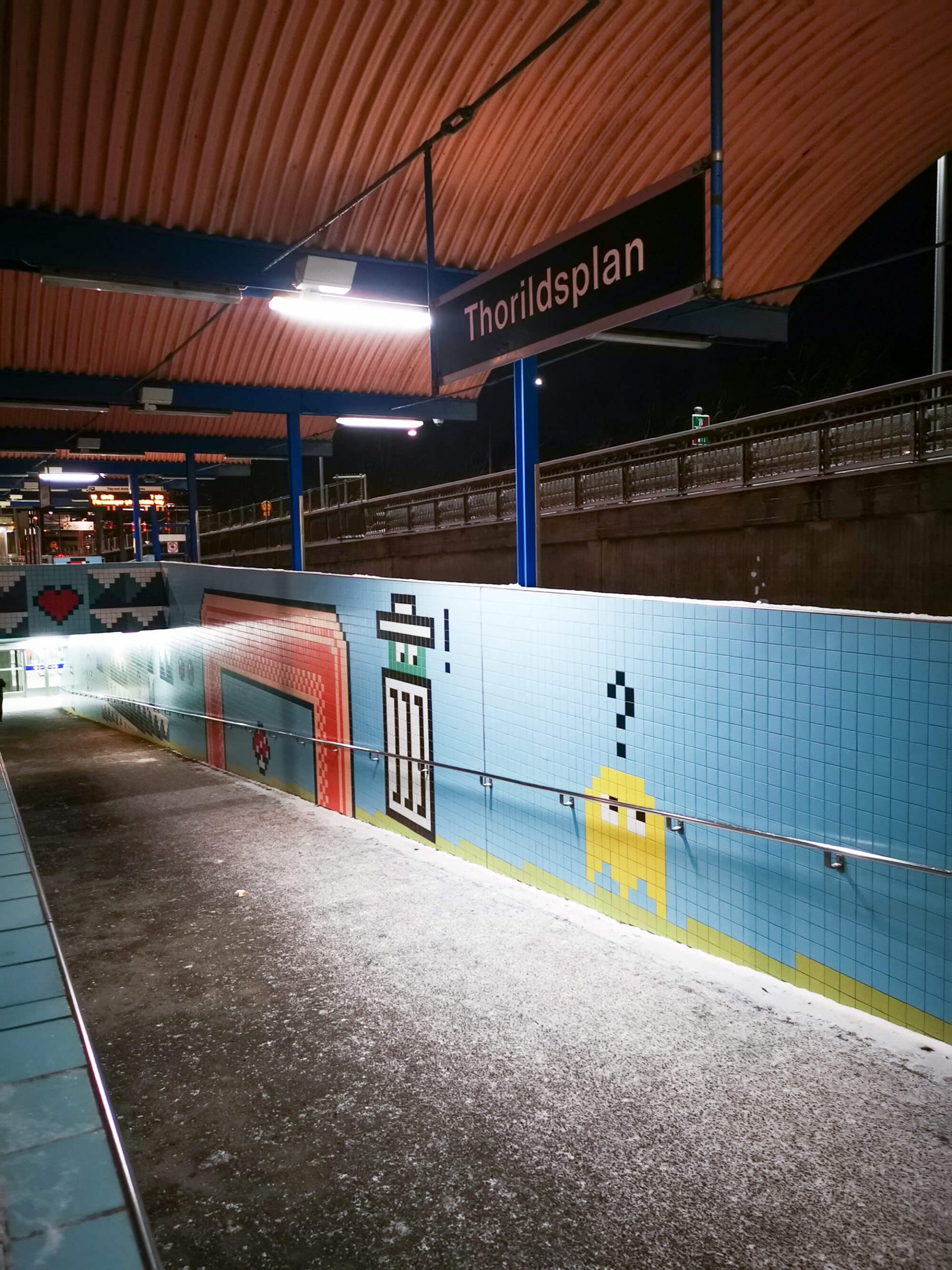 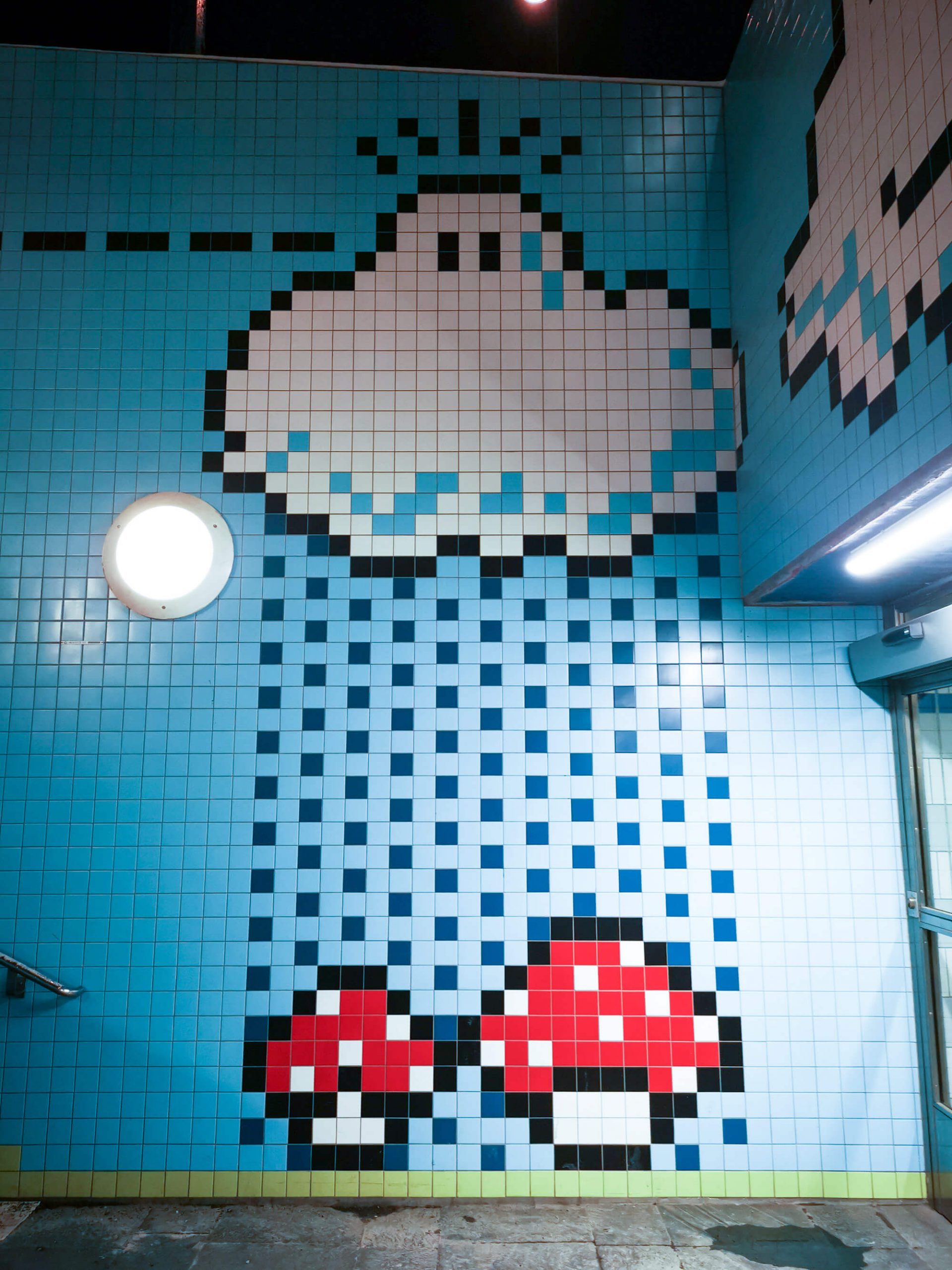 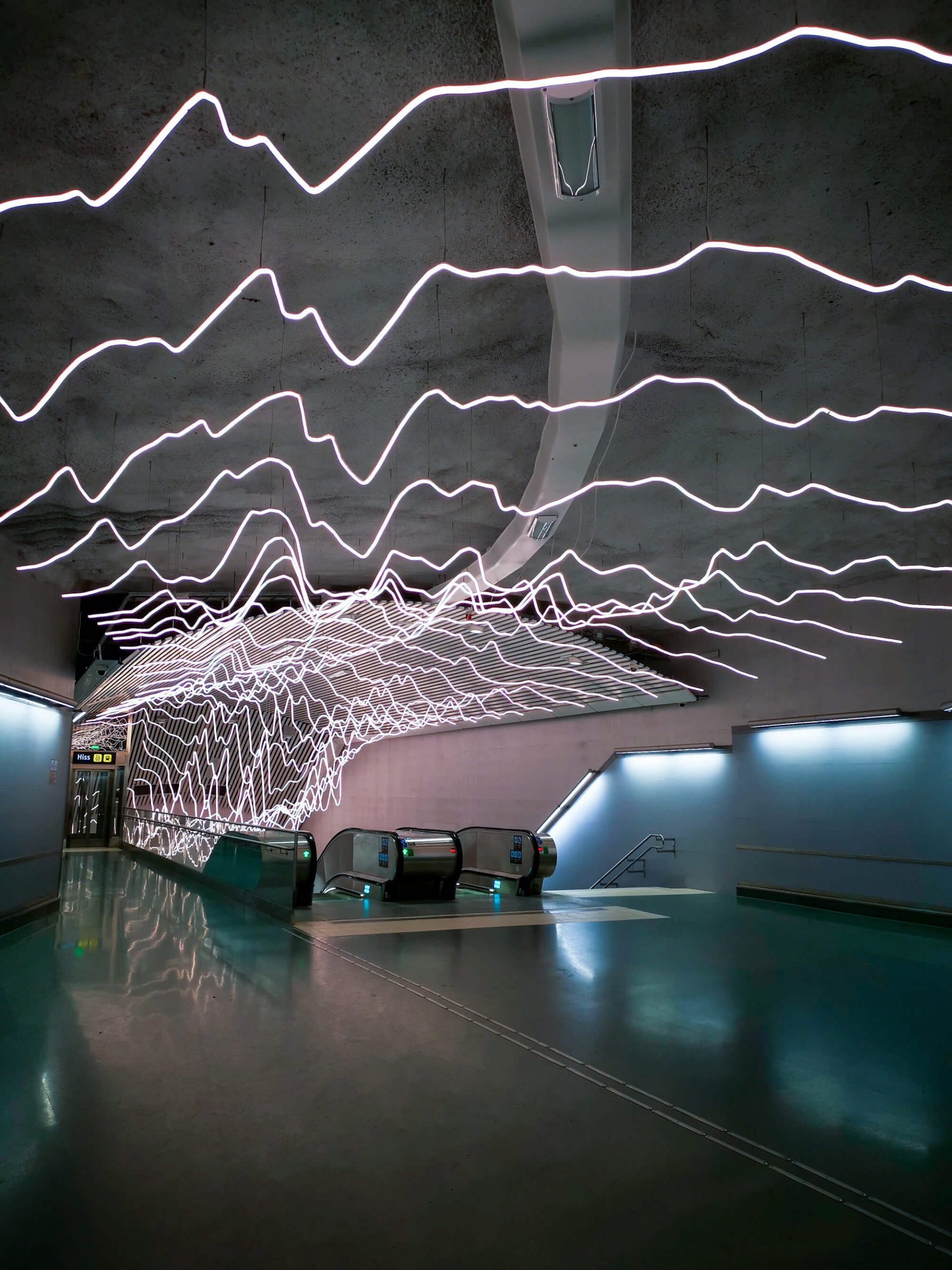 This was the toughest station for us to find but I was determined to because the pictures I’d seen looked like a jolt of electricity running down the tunnel and it appealed to me.

Citybanan is a new track for the Stockholm commuter trains which connects T-Centralen directly to Odenplan so that is the direction you want to travel in to find this piece of art which is called “Life Line” and was inspired by the heartbeats of the artist’s son shown on the monitor during childbirth. Ahh!

Other Stations to visit on The Green Line
Hötorget
Bagarmossen
Fridhemsplan 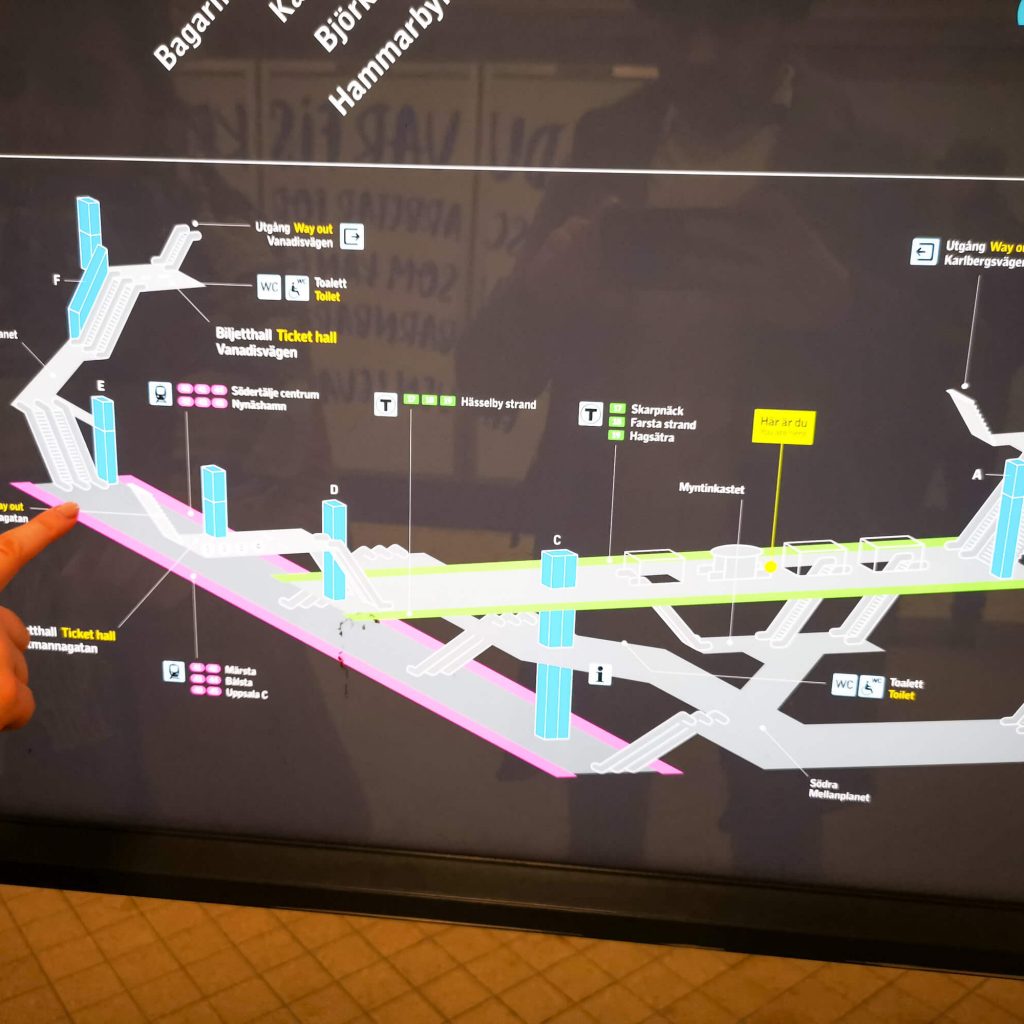 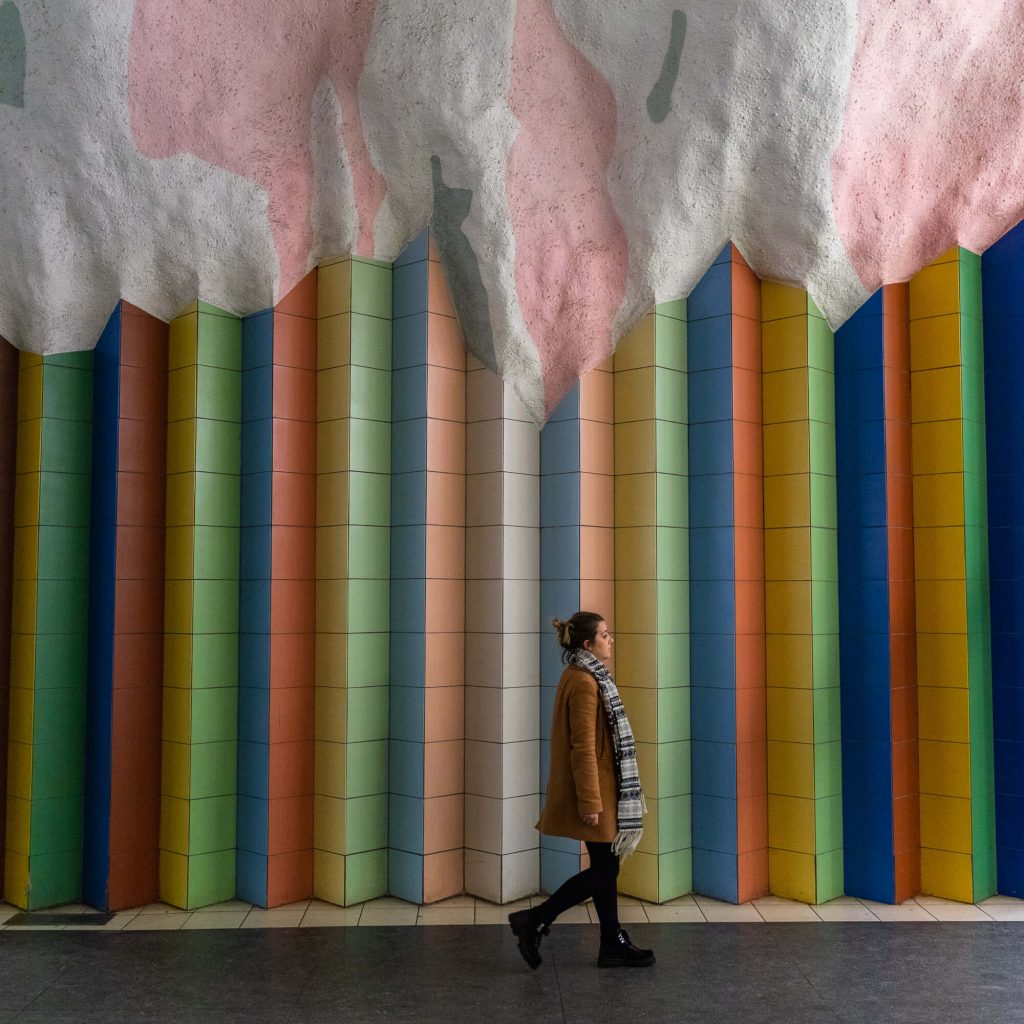 I spotted the Mörby Centrum Station on a round-up post of someone’s trip to Stockholm and thought it was so pretty so I had to add it to the list.

It is much smaller than many of the other station designs but this tiled artwork is an optical illusion depending on where you stand, showing either pastel hues of pink and white, to shades of greyish green.

This artwork is to highlight the changing landscape while on a journey.

Kungliga Tekniska Högskolan which is the KTH Royal Institute of Technology now has its own station to help students get to class. With famous alumni like Dolph Lundgren (I had to get his name in there).

This station is focused on the educational and in particular, this award-winning station is a celebration of scientific advances and discoveries. 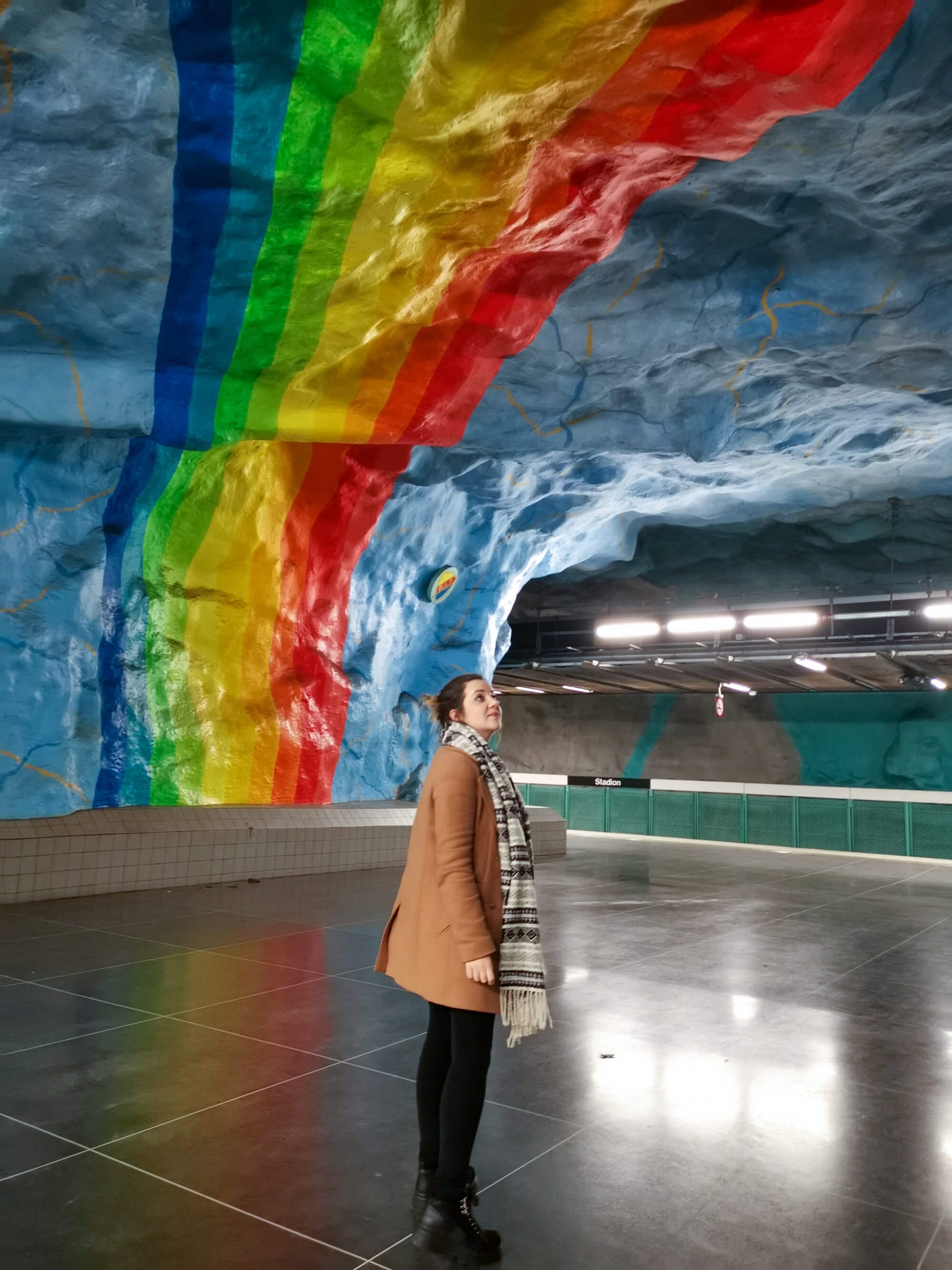 The wonderful, bright and colourful rainbow design of Stadion Station is really eye-catching.

The nearby area of Östermalms is the main location for Stockholms Pride festival and by coincidence, the rainbow design at Stadion, which is the closest station, shows a warm welcome to festival-goers.

However, that is not the purpose of the rainbow artwork. It is believed that there were concerns when building, that travellers would associate these underground cave stations with negativity and darkness and the clear blue sky and rainbow artwork serves as a reminder that there sky not too far above.

Other Stations to visit on The Red Line
Östermalmstorg
Universitetet 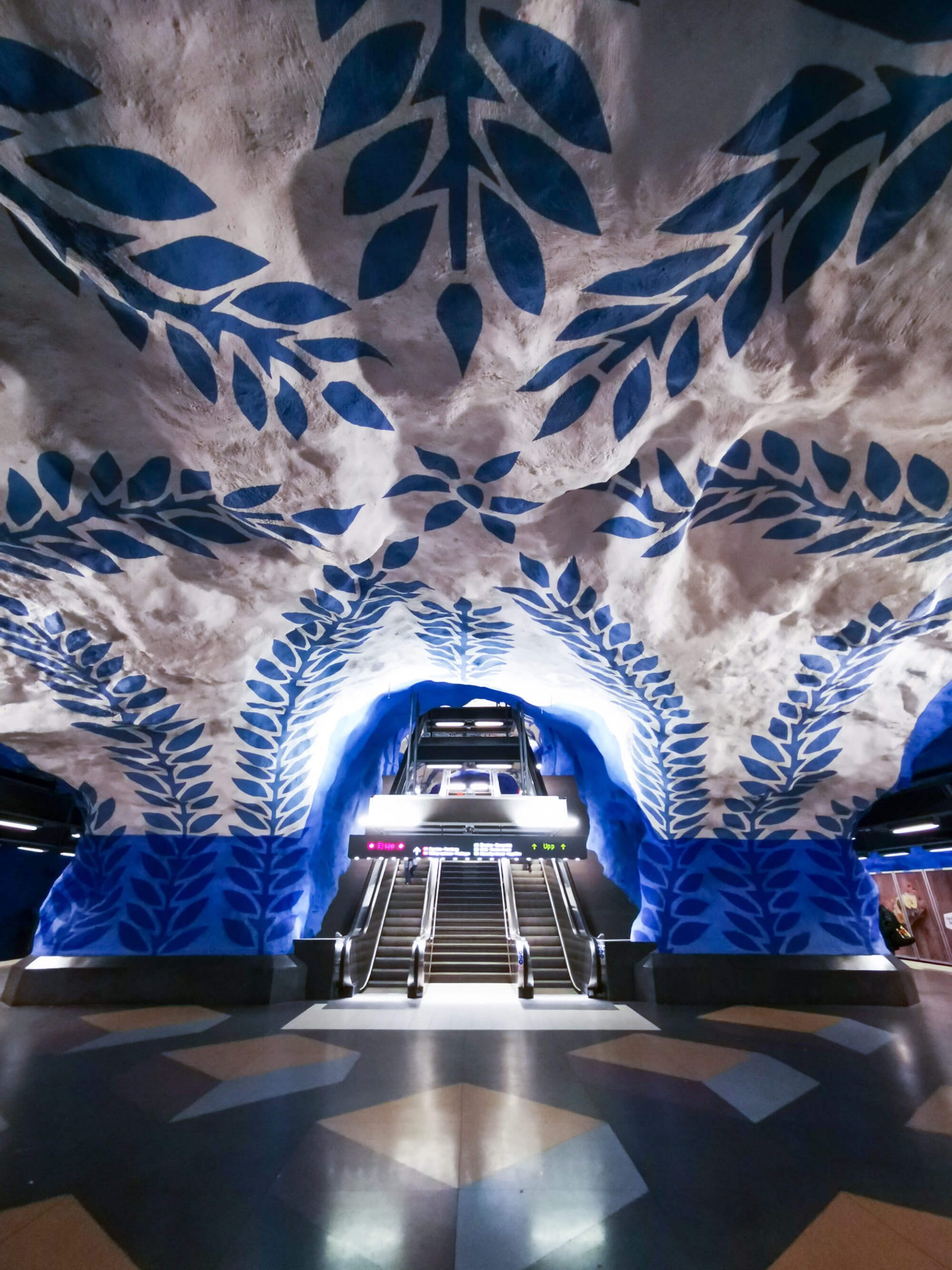 T-Centralen was opened to traffic in 1957 and as the hub of Stockholm’s subway, was the first of the stations to feature artwork which was completed years later, in 1975.

As the hub of the subway, the Blue Line Platform as it’s known is completely painted in shades of blue. This may seem a little obvious and lacking creativity in terms of design but it is considered to have much more thought behind it and since reading this idea, I think it’s something very clever and looking back, it worked on me.

So, I believe the concept of using the blue shades was to create a calming atmosphere for those in a hurry. Not only is the colour aesthetically pleasing but as the busiest of the stations, with many connections to other metro lines and commuter trains, can have a relaxing effect. This station has been kept quite simple with stylized flowers but I also consider it one of prettiest stations. A phrase I didn’t envisage myself using, but there we go. 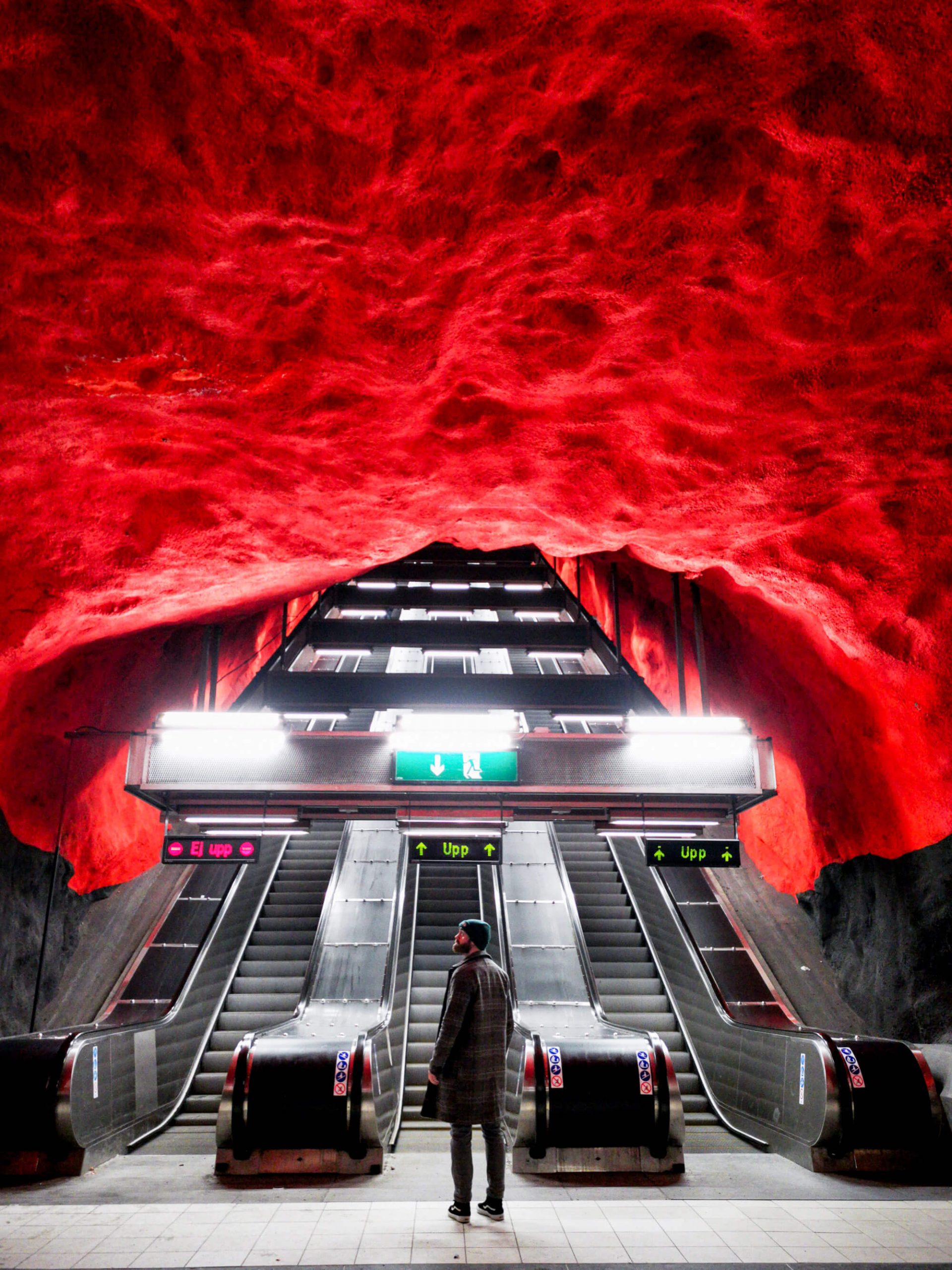 As well as T-Centralen, the Solna Centrum Station has to be one of the most recognisable of the Stockholm subway stations and since our visit, this is the station that I now see pictures of everywhere, which I think it’s largely due to that standout hellfire red.

And I have to say that as I stood there looking at it, it did make me feel as though I was in the centre of the earth surrounded by molten lava. It’s quite awe-inspiring. But, although the majority of pictures seen online show the escalator area which features only that deep red colour, that’s not actually what this station is about.

The Solna Centrum Station became a political art piece and is one of only a few stations to have artwork showing 70s societal issues. The green colour is to signify the forest and with that red colour previously mentioned, signifying the setting evening sun. The illustrations were added at a later date and show debated issues such as the environment and over logging of the forest. 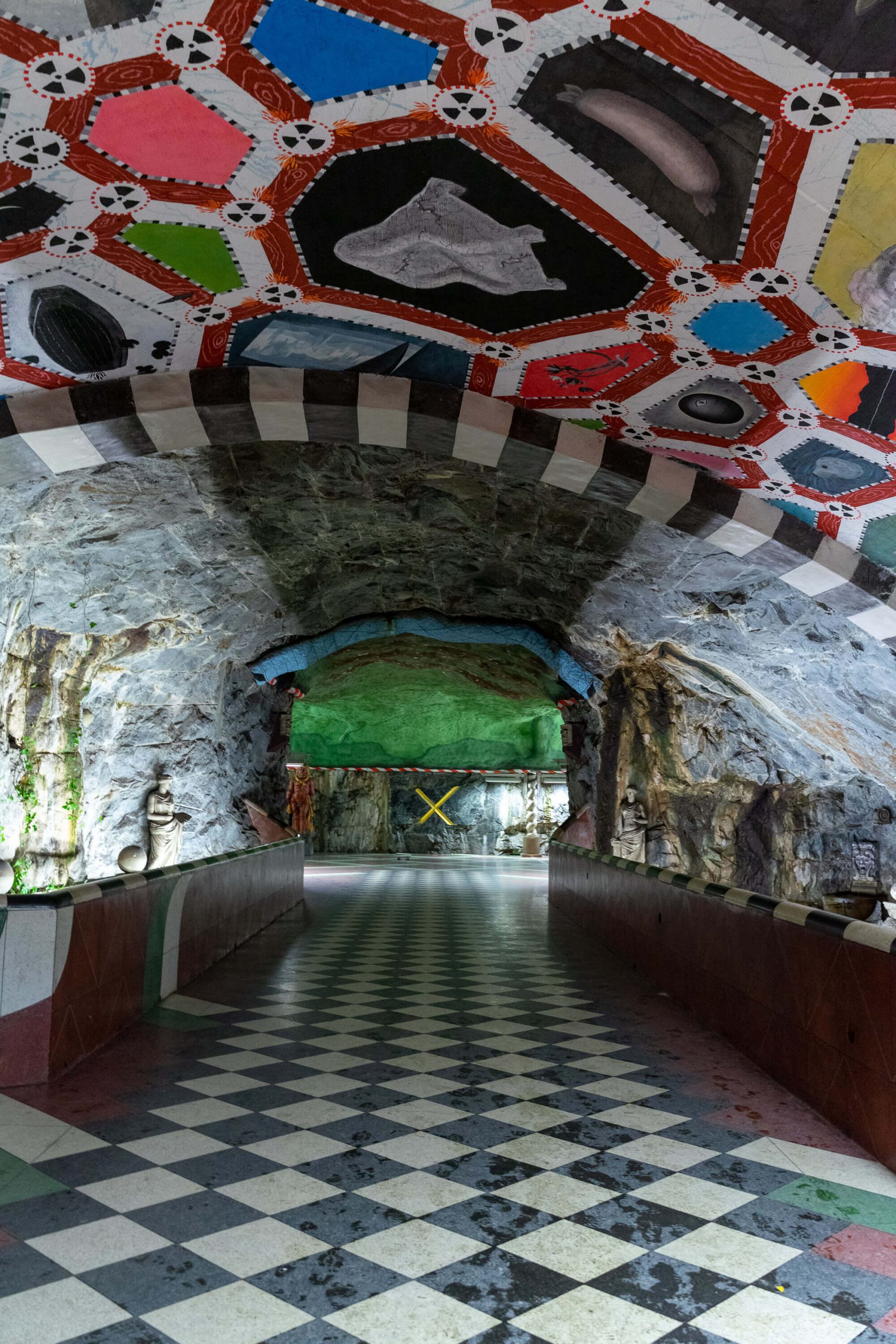 Kungsträdgården Station is located in downtown Stockholm, near the area we were staying and the first of the subway stations we saw. I’ll admit that I was quite overwhelmed as we came into full view of it.

I had never experienced any artwork of this kind before and there was so much to look at and to take in. Looking back, I hadn’t seriously considered the artwork covering such a vast area and I was quite taken aback by it. In the best way, of course.

Kungsträdgården, which roughly translates to “Kings Garden” is one of central Stockholms oldest parks and the design of the station tells the story of the park and its history. It was originally the site for Makalös Palace and was also used for military exercises before becoming a park in 1875.

It seemed bizarre to me to see the people of Stockholm going about their day, not stopping to photograph or admire the beauty of these stations. That we become so removed from these wonderful things as they become the norm. They see them every day. For many, they know no different. Yet, as a tourist, it was magnificent to see and experience and admire this Stockholm transport option in envy.

Is it worth visiting the underground art in the Stockholm Metro?

Over 90 of the 100 subway stations in Stockholm have been decorated with art, sculptures, mosaics, installations and more.

While you can find organised guided tours of the metro station artwork, it is also possible to make your own self guided Stockholm subway art tour as we did. We found this option more appealing to us as we could focus solely on visiting the stations that we had in mind and we could take that little bit of extra time in each location to really enjoy the surroundings.

I would highly, highly recommend that anyone visiting Stockholm take the time to experience the artwork of these stations. Whether that is taking a tour or just one or two stops while travelling, I think it is more than worth visiting.

If you are only looking to visit some stations, the single journey ticket may be a good option for you. This is what we chose. For approximately SEK 45 which I believe is around £3.50 in British Pounds, you have the option of unlimited travel for 75 minutes.

The advised time for completing the tour of stations is 2 hours, so if you are looking to experience all artwork you may need an extension on this ticket but I do think it’s a good value for the money.

We chose to visit fewer stations but spend a little more time in each and found the 75 minutes more than adequate for this.

The time of validity is printed on the card and you must buy a new card from one of the machines/kiosks prior to this time if required.

Need Somewhere To Stay In Stockholm?

We booked ourselves into the budget friendly and very central Mornington Hotel Stockholm and couldn’t have been more pleased with our choice.

It’s one that you should definitely consider if you’re planning a visit any time soon.

Buy your Stockholm hop on, hop off bus tour tickets before you travel and see the best sights that Stockholm has to offer.