One of the toughest choices that I find when visiting a new city, is deciding where to eat. I always feel a little overwhelmed by this decision as chains can be predictable and safe but it’s nice to find somewhere new and local to try and looking for Dundee restaurants was no different.

We came across the Bird and Bear in Dundee as it was close to the Sleeperz hotel which we had chosen when booking an overnight stay in the city. Only a short walk from the train station and our hotel, the Bird and Bear seemed like a lively place, filled with locals (which I always think is a good sign) and busy without being jam-packed.

It was a Saturday night that we went along for a date night of food and drinks and this can always be a risky move as you know people may be out for the long haul. Places tend to be busier, noisier and a little more chaotic than visiting on a weeknight but after a short wait at the bar, we were seated upstairs for our meal.

Situated on the corner of Whitehall Crescent, the Bird and Bear restaurant and bar is lucky to receive fantastic amounts of light that shine through its grand windows which are filled with bottles upon bottles of spirits.

Inside, the bar area in the Bird and Bear is just as pleasing to the eye. Covered with glossy green subway tiles, soft velvets and leather seating, hanging bird cages, plenty of copper touches and an abundance of green plants which sit in the windowsill. This area was busy with people standing due to the time that we arrived but there is plenty of seating around that area if you are lucky to get there early.

As we were seated upstairs and slightly away from the bar, it was a little quieter. The main eating area is a balcony overlooking the bar so you are not secluded from the noise but it is quiet enough to talk without feeling the need to raise your voice. There were not many tables upstairs but we were seated quickly and without reservation which we felt very fortunate because it was busy.

The staff were very friendly and attentive to us despite the large parties dining and the ever-growing crowd downstairs. Firstly we ordered some cocktails as we browsed the Bird and Bear menu and these arrived quickly and looked and tasted lovely.

I ordered the Light and Stormzy which is white rum, maraschino, citrus and ginger beer while Peter ordered the Thriller In Vanilla which is vanilla vodka, fresh blueberry, pineapple juice, sugar and ginger beer. Peter is not a big drinker so I was a little unsure as to how much he would enjoy a cocktail but I think the fruity twist was a welcome change and he liked trying something new.

After looking at the menu, I chose to order from the grill section of the menu and I went for the hanger steak cooked medium rare with skinny fries and peppercorn sauce while Peter, of course, chose a burger. However, this was another welcome change for him as he chose to order the spiced bean and sweet potato veggie burger with baby gem, pickled red onions, chutney, skinny fries and slaw. I tend to order the veggie option when we dine out so this felt like a real role reversal and I must admit that I had a little food envy when the meals arrived.

The steak was cooked perfectly and was delicious and more-ish although I found the full meal to be a little on the cold side, as though it had been sitting out and that was a little disappointing but as mentioned above, it was a very busy Saturday night and I didn’t think it was enough to request it be reheated. Peters burger was hot although his fries were also a little on the cold side again, he did not feel that this was worthy of sending back either.

We found the pricing of the meals and cocktails to be reasonable and as expected for the standard provided. Cocktails priced at approx. £8 each and the meals at approx £10 each.

After finishing our meals and drinks, we decided to call it a night and retire to the hotel as we had already had a long day after travelling to Glasgow earlier that day but we had enjoyed our visit to the Bird and Bear so much that we decided to return for brunch the following day, which also allowed us to experience a much quieter and more relaxed atmosphere to the evening before.

Brunch at Bird and Bear 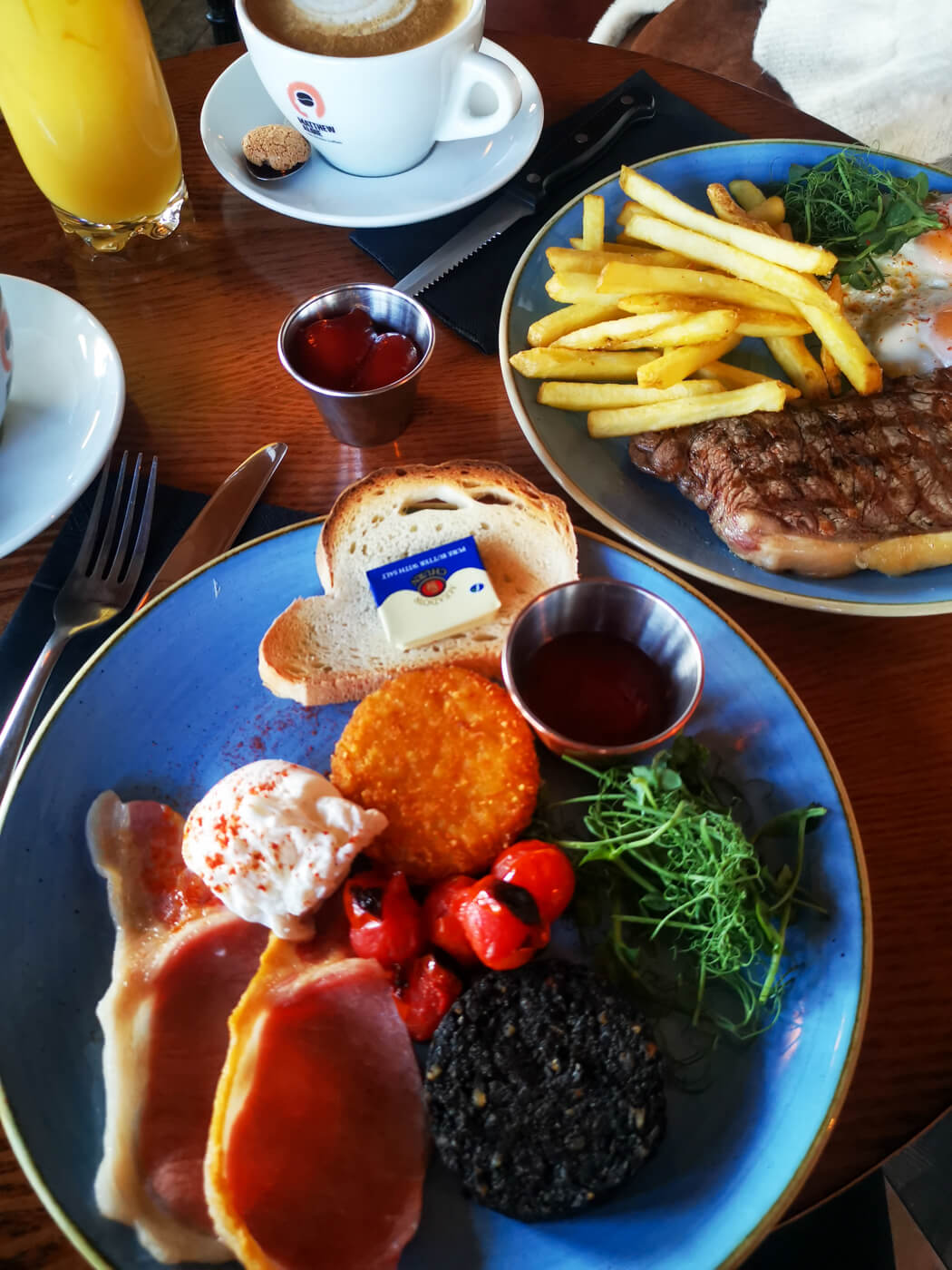 I had read reviews and viewed some pictures of the breakfast before visiting and was really looking forward to trying this but in all honestly, I found that I didn’t enjoy it as much as I had the previous evening which was a little disappointing but I have to say that I put this underwhelmed opinion on myself. I often think I am best to leave on a high and perhaps I was placing too much hope on recreating the night before that I set myself up for a little disappointment. Or perhaps it was a different chef, I’m not entirely sure but I know that I should have left it as a good thing and not pushed my luck!

Because I had enjoyed the first meal so much, I decided to order the brunch version of it and this was by way of a medium cooked steak with a fried egg and fries. I don’t normally eat so much meat in short succession but I had savoured the taste from the previous evening and wanted to try it again (another mistake on my part!) while Peter ordered the Bird and Bear brunch which consists of smoked backed bacon, Stornoway black pudding, free-range poached egg, house hash brown, roasted cherry vine tomatoes, toasted house-made bread and bloody mary ketchup.

I found the steak to be slightly tough at brunch as this was cooked medium and I prefer my steak to be rare where the option is available, I also found this meal to be a little on the cold side just as I had the night before and it was a little lacklustre in terms of colour. Some colourful tomatoes would not have gone amiss on my plate to add a little something extra. Although Peter enjoyed his meal, he didn’t feel that it was anything special and I think that we both wished that we had ordered something different. Many of the reviews read that the chorizo hash was a good option and on reflection, I wish that I had trusted the opinions of others before me.

With the food costing around £8 a meal, there are many brunch beverages available such as mimosa and a house beary Mary to accompany this if you are looking for something a little boozy to go along with your breakfast, however, we both sensibly opted for coffee.

All in all, I love the atmosphere at the Bird and Bear, it’s lively and welcoming but I felt that the food left a little to be desired. I think with some slight improvements this is a great bar and restaurant to visit for a light meal and evening drinks. It has a great setting and a beautiful interior but lacks a little bit of that wow factor. I look forward to seeing how it evolves and I look forward to returning on my next visit to Dundee.