Visiting the Kilted Kangaroo Dundee, for us, was a last-minute decision. It’s around a 15-minute walk from the city centre and it became somewhere to escape the sudden downpour that we Scots are only too familiar with!

Because of this, I had no idea what to expect, other than the inclination that it may be a Scottish/Australian themed bar. And unsurprisingly, when we walked in, that’s exactly what we found.

But my expectations from viewing the Kilted Kangaroo at street level to entering the bar were completely different.

The premises was much bigger than I had anticipated, very spacious and there was a divide between the bar and restaurants area so we weren’t disturbed by the noise of those drinking. We had arrived around lunchtime, not too long after opening, so it was very quiet but I can only imagine that it is a lively place later on in the day. 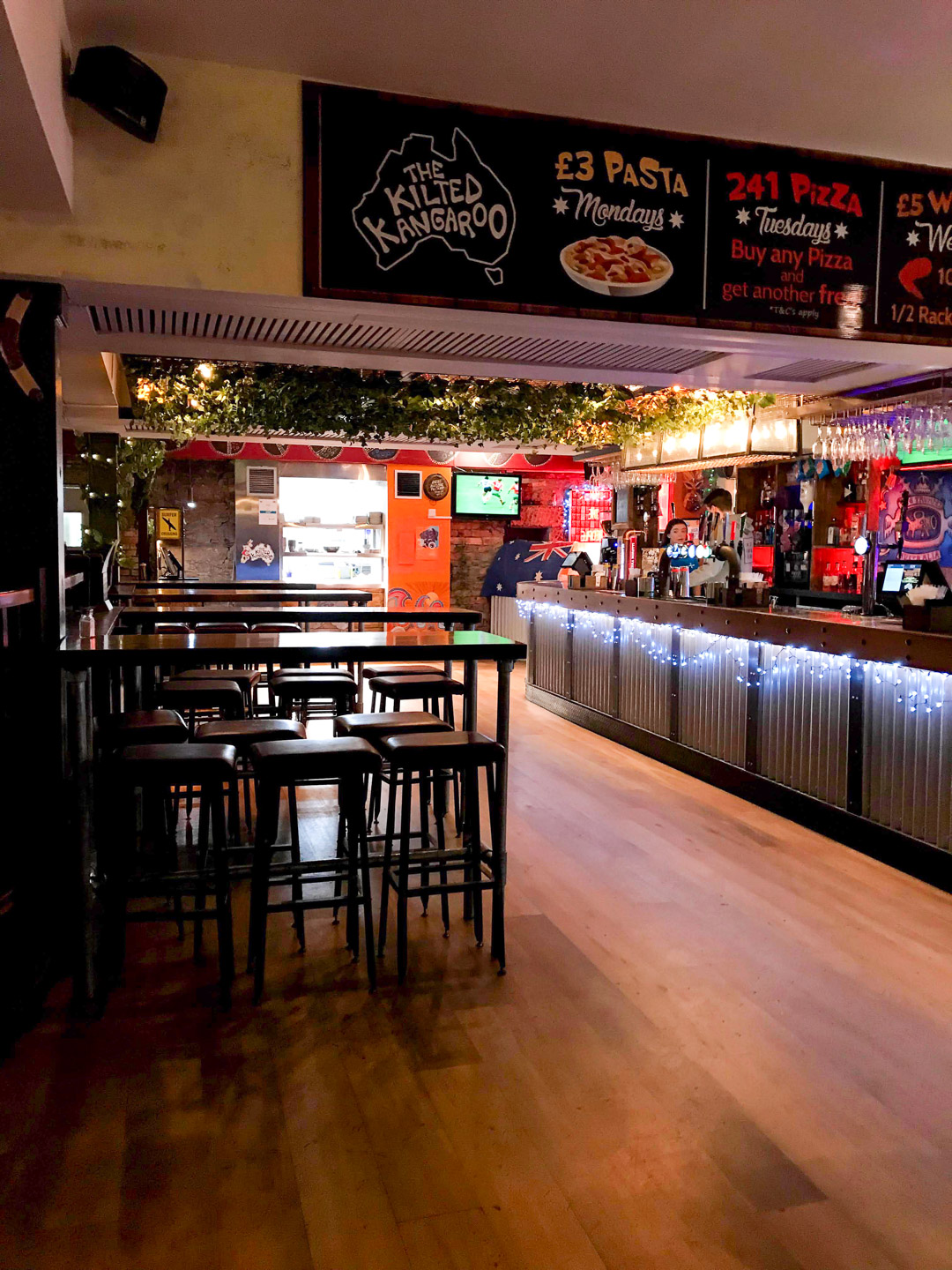 I believe if you are looking for karaoke in Dundee, quizzes and DJ’s that this is a good place to go.

Our table also had a view over their large beer garden area, which I can only imagine is a fantastic spot in brighter weather.

*One point that I’m not entirely sure of is how accessible the Kilted Kangaroo is for those with mobility concerns. I felt that there was plenty of space once inside the building, but there are stairs down to enter and some further steps to gain access to the beer garden. I do believe that they are trying to provide better access to the beer garden but this is subject to approvals. 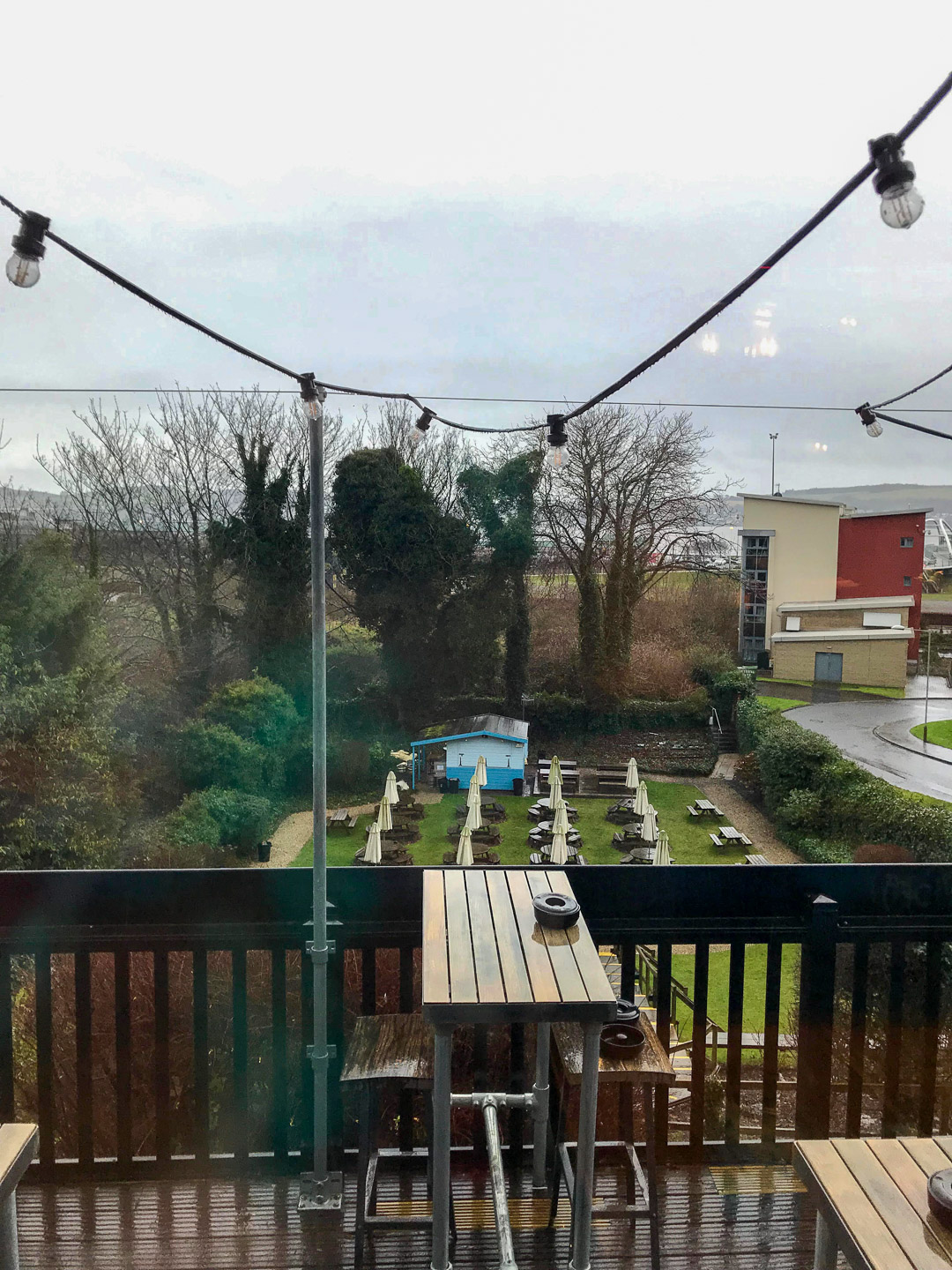 The staff were very welcoming, polite and friendly. We were quickly seated at a table on arrival and provided with a couple of menus. I am horribly indecisive when it comes to picking food, especially when I don’t know what to expect but also when so much of it sounds great, so it took me a little while to decide.

We were not made to feel rushed in any way which was nice and really allowed us to relax and take our time in choosing.

Either that or they were giving me space due to the downpour of rain. Because anyone that wears it will understand, much of my mascara was running down my face and I must have looked an absolute fright as I kept running back and forth to the toilets with that horrible sting in my eye as I resisted smearing it further.

We ordered some drinks, a Coke and an Irn Bru, which came served in these Sailor Jerry tin cups that I thought were lovely! 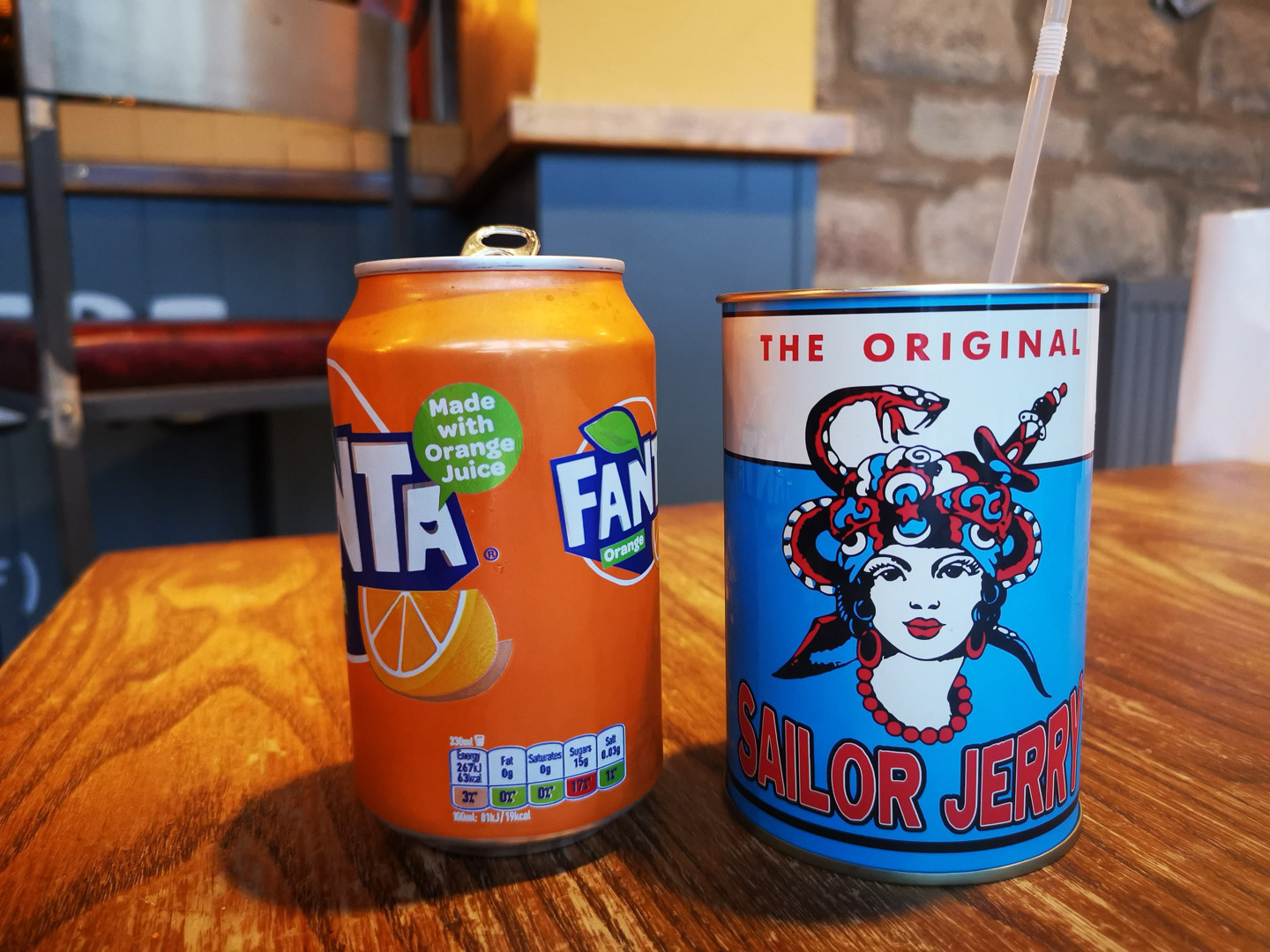 Anyway, I was pleasantly surprised by the Kilted Kangaroo Dundee menu, which had a variety of what I would call pub food. But a higher standard of pub food. We’re talking pizzas, loaded fries, burgers, hot dogs, ribs, wings and far more than I could list here. 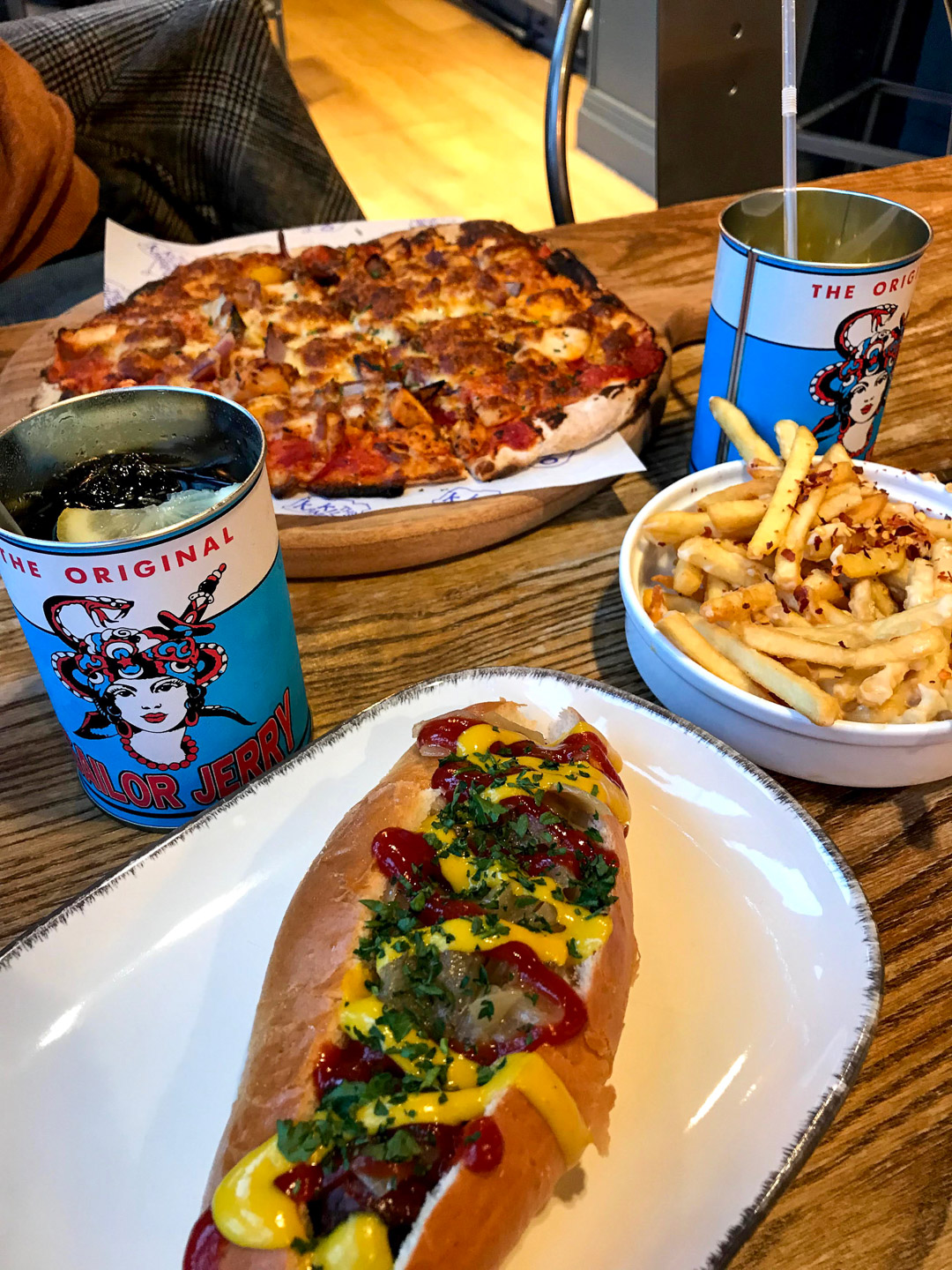 There are lighter starters such as soup or King prawns but if you are feeling a little bit more adventurous, you could try the Kangaroo burger or Kangaroo rump!

The Kilted Kangaroo also offers a selection of vegetarian, vegan and gluten-free options such as mac and cheese, The Veggie Dog and veggie skewers. They sound far better on the menu than I have probably just sold them as. I think there would be something on the menu to suit everyone

I love hot dogs, I think it’s the child in me. Whenever I see them on a menu, I seem to gravitate towards them, so I ordered The Kilted Dog, which is an apple and pork sausage with fried onions, mustard and ketchup. It was lovely, of good quality and definitely a meal that I would be happy to have again.

Peter, on the other hand, naturally gravitates towards pizzas and he chose the Cajun Pizza which has roast cajun chicken, peppers, onions and drizzled yogurt. He thoroughly enjoyed it, it tasted fresh and he had no complaints.

Together, we had a side of fries. The portion was more than enough for the two of us, but I have read reviews online which said that they thought the portions could be bigger.

Most of the meals are within the £5-10 region which I think is standard across most of the pub food Dundee locations that I have visited.

Although things may be a little bit different at the moment, I would suggest when visiting the Kilted Kangaroo Dundee book a table if you can!

If you live or are visiting further south, there is also the option of visiting Kilted Kangaroo Stirling.

For more Dundee food reviews, check out our post on The Bird and Bear