When Mac’s Pizzeria opened, I was definitely intrigued. It looked stylish and it’s in a great location. It certainly seemed like a new upper market pizza place and a nice change from the chains!

My intrigue was nothing like Peters though, Peter could eat pizza every night of the week. This is something that I don’t ever question and it’s no exaggeration because people who love pizza, LOVE pizza, so for that reason, I know that he would have been thrilled to have visited long before now.

Me, on the other hand, I have to be really in the mood for pizza. It’s a heavy meal, one that I do love, don’t get me wrong but I don’t eat it that often and for that reason when I do, it’s incredible.

So this review is perhaps long overdue but we got there!

I had seen pictures of the restaurant online when it opened and I had heard a couple of mentions and reviews here and there but it wasn’t until we went to The Esslemont for lunch that I actually had the opportunity to see Mac’s Pizzeria in person. I suppose in part, it’s that old saying, out of sight, out of mind.

But when I saw it, I wanted to visit as quickly as I could! I finally got that hankering. So we booked a table one cold night in late September, which I don’t know about you, but I actually consider this perfect pizza weather!

If you didn’t know, Mac’s Pizzeria and The Esslemont are in the same building (the old Esslemont and Macintosh, hence the restaurant names) but they are on different floors and I would say that they also have very different vibes. 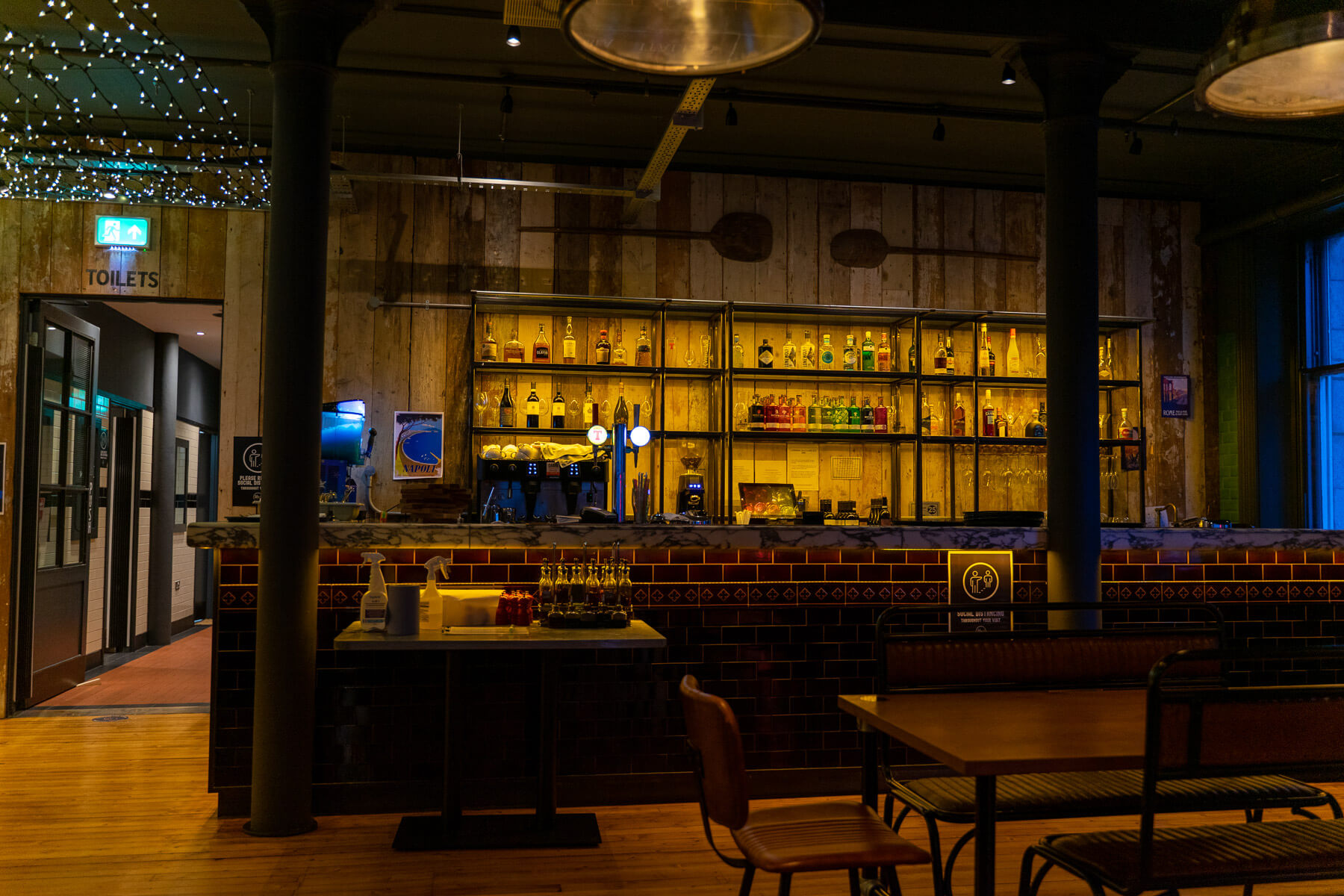 While I think that The Esslemont is quite a luxe and stylish restaurant, great for an occasional meal or cocktails with friends, Mac’s Pizzeria definitely comes across as more down to earth, somewhere to hang out with friends with good food and some nice drinks. Out of the two, I would also class Mac’s Pizzeria as the more family-friendly of the two options if you are considering visiting with children.

It was very quiet when we arrived because we made the decision to visit on one of the restaurants quieter days, partly because we were taking photos to show you what you can expect from visiting but also in part because we didn’t want to disrupt other diners so while we may show it as being quite empty, there was good reason for this and it is a very popular city destination for food. 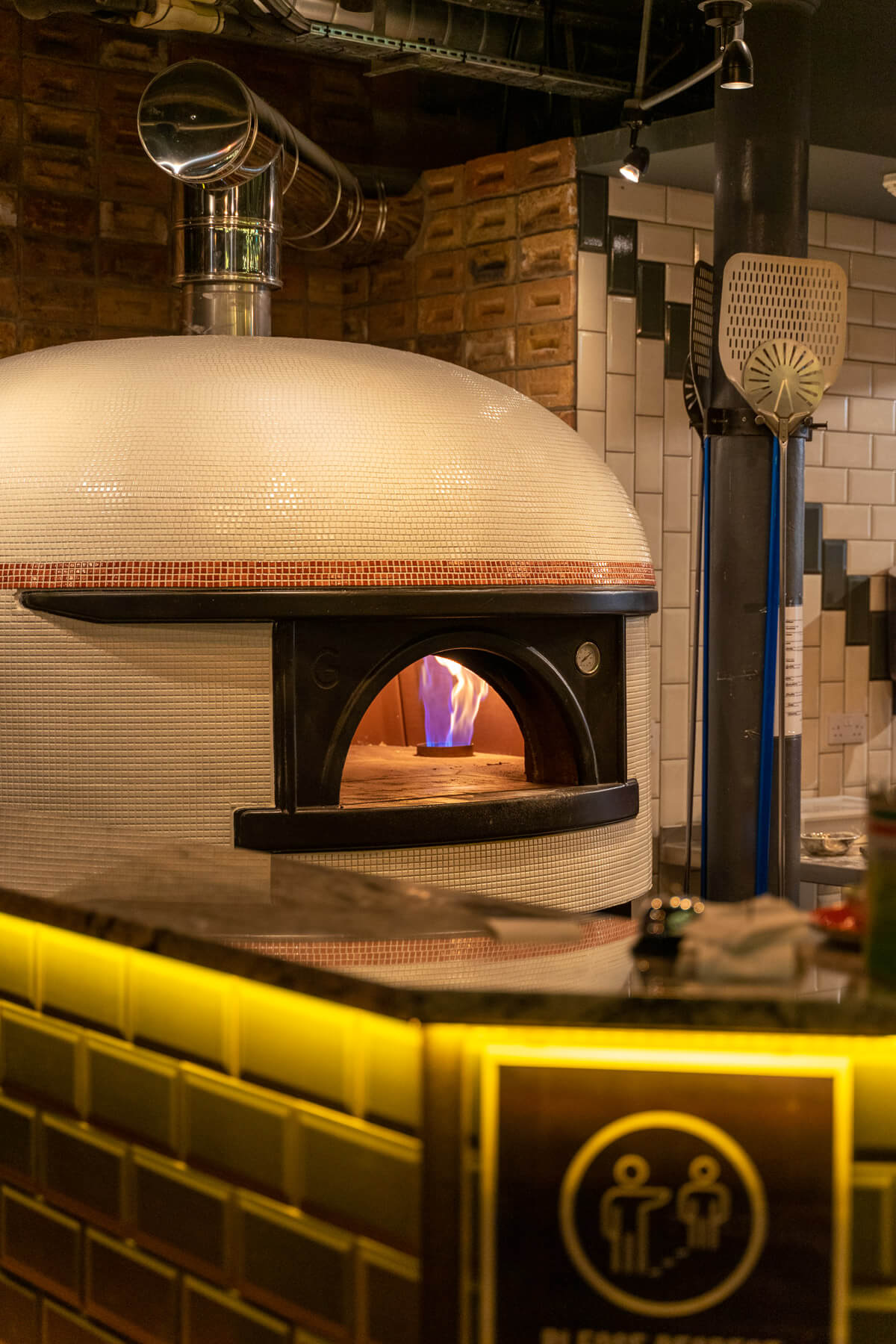 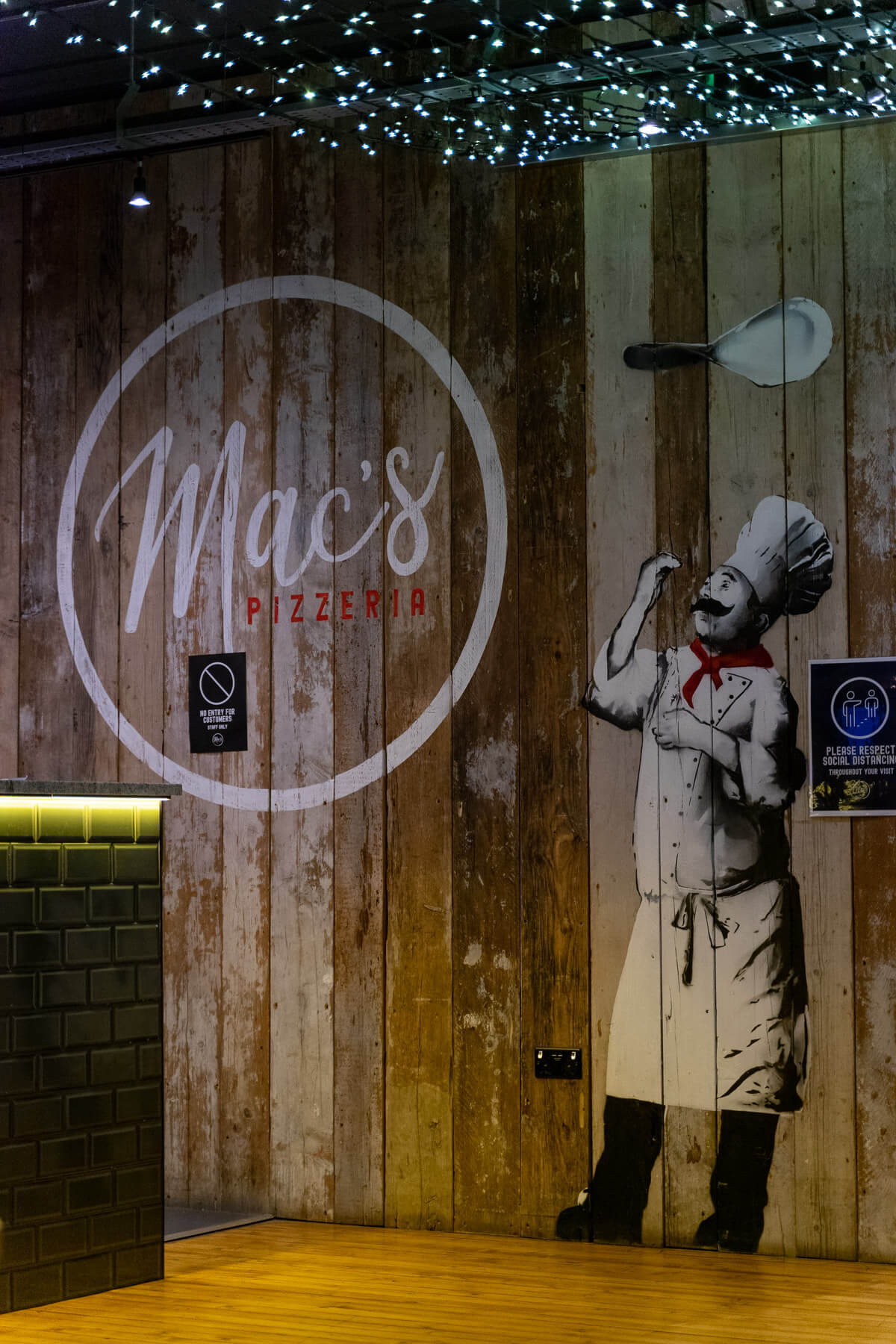 We were seated quickly and we were actually given the choice to choose where we would like to sit as it was quiet, which was nice because it felt a little bit more freeing and we could choose an area that suited us rather than being holed in a corner because there were only two of us.

The restaurant is quite substantial in size and can seat up to 120 people, where you can choose from the long booth sharing style tables to more private seating for smaller parties. They do also have a quieter area available for booking, slightly away from the rest of the seating and this is for parties of up to 14 people.

To start, we naturally ordered a couple of drinks, I chose to have a coke as I normally would with pizza but Peter decided to order a Day Shift IPA from Fierce Beer. I have to say that I was also very excited to see some slushies on the drinks menu because I, myself, am clearly a massive child but I know that would appeal to adults and kids alike so definitely worth a mention in my eyes!

Back to the subject of beer, Mac’s Pizzeria and Fierce Beer have a collaboration which we hadn’t heard about before but may be of interest to those of you who love a good local beer!

So, at Mac’s Pizzeria, you can order from a choice of the Fierce Beers on offer, as we did, but you can actually also order a fresh Mac’s pizza to have with your beer at the Fierce Beer Flagship over on Exchequer Row, which is only a short distance away and I believe there is also a discount included in this but that is, of course, subject to change. I hope that made sense! 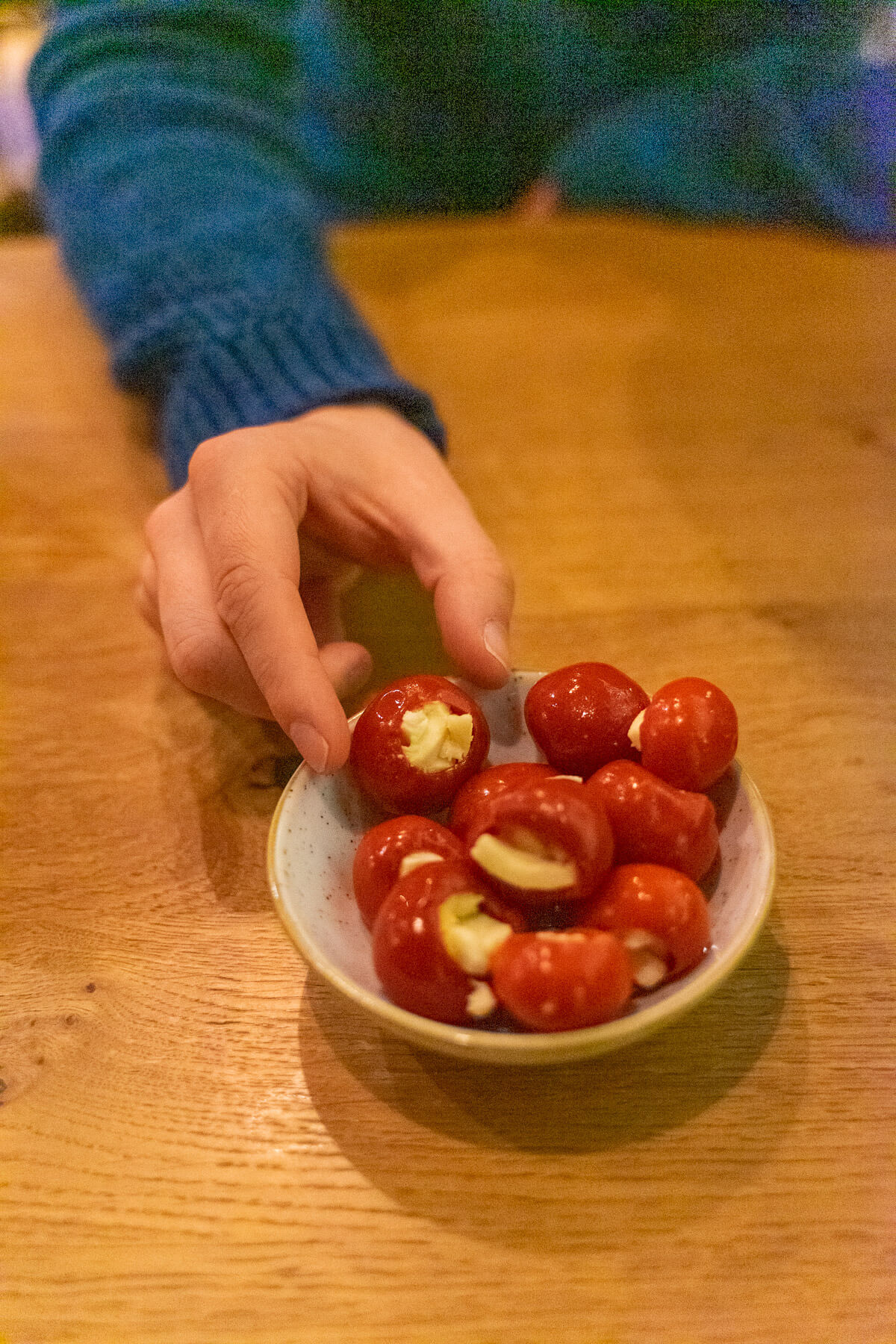 Me being me, I had already looked at the menu before visiting so I had a good idea of what I would be ordering but I was interested to see if there would be any different options once we arrived so my mind wasn’t entirely set.

While Peter looked at the menu, we decided to order a starter to share while we also took some time to enjoy being out, have a little normality and take in the surroundings. The service was really friendly and helpful so we did ask for some recommendations when it came to the beer and the starter and decided to put our trust in the staff that worked there and luckily, it paid off.

For our starter, we had some ‘Mozerella Stuffed Sweet Chilli Peppers’ which are down as a side on the menu but you get more than enough to share between two so I think they make a great starter option if you are looking for something a little bit lighter and more refreshing before the pizza.

When it came to mains, I ordered the Caramellata ‘Tomato sauce, Fior di latte mozzarella, spinach,
caramelised onion, goats cheese & garlic oil’ because I am a total sucker for goats cheese and caramelised onion. I found the goats cheese to be very creamy and went really nicely with the onions, although the spinach was a little watery but that happens. It certainly didn’t affect the pizza flavour overall.

Peter chose the daily special, I’m not entirely sure what it was called but it was a pepperoni and pineapple special. Pepperoni is Peters favourite pizza topping so that was an instant winner in his eyes but although I am a big fan of pineapple on pizza, he was a little unsure about that combination. Turns out, he loved it. The pineapple kept its form and juicy texture, it was not too oily from the pepperoni and he thought that it was just cheesy enough. There was enough sauce and flavour to not require a dip. 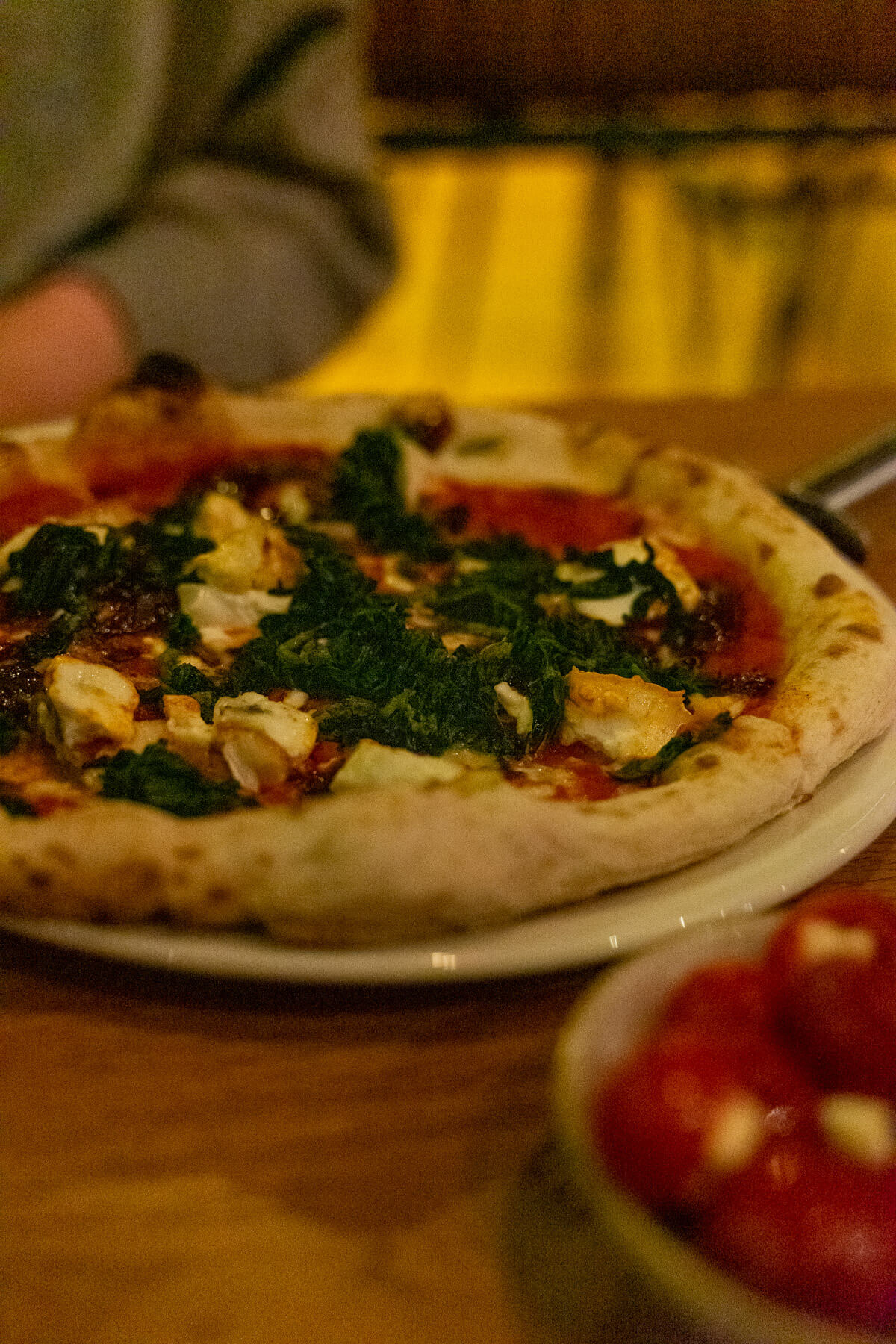 The Neapolitan style pizza was delicious, we both really enjoyed the pizza base and crust. These are typically quite soft and thin bases and cooked in a very hot pizza oven which you can see from your table and that’s a nice touch. I love the heat and being able to see your food being made fresh.

With the Neapolitan pizza, it is not made with a lot of ingredients and typically with flour, water, salt and yeast so they are not gluten-free unfortunately but the dough is Vegan and they can use Vegan cheese also if you require this. There are some gluten-free options available on the menu but sadly, the pizza is not on there.

When it comes to the pricing, I think it is reasonable from £8.50-10.50 a pizza. I find that standard when ordering pizza. The pizzas are large in my eyes, I think I only ate half of mine and you do get the option to take them away if you would like to, Peter ate all of his but he did struggle by the end.

We really enjoyed our experience at Mac’s Pizzeria and I will definitely return, I’ll make sure to have a big appetite before I do though!

There are projector screens to showcase live sports while you enjoy your beer and pizza if you would like that.

They often do a bottomless pizza Sunday where you have two hours to eat as much pizza as you want for £14 (soft drink included!).

20% student discount available 7 days a week which is fantastic if you have it!